Luich is the het ship between Luigi and Princess Peach from the Super Mario fandom.

As evidenced by Mario and Luigi: Partners in Time and Yoshi's Island DS, Luigi and Peach have known each other since childhood. Like his brother, Baby Luigi would occasionally help calm down Baby Peach whenever she had tantrums. Both were destined star children kidnapped by Kamek and saved by Yoshi. Back then, they would have play dates.

In their adulthoods, Luigi would occasionally join Mario in saving Princess Peach. However, in game modes such as Super Luigi Galaxy or New Super Luigi, Luigi will save Princess Peach on his own. However, these modes are typically not considered canon due to their purpose of being 'hard mode' versions. Both New Super Luigi and Super Mario Run have Peach reward Luigi with a kiss like any other playable characters.

Both Princess Peach and Luigi have a history of working together. Super Mario 3D World and Super Mario Run have the both of them as playable characters cooperating to defeat Bowser. They also play sports and party games together. Their team names in the Mario Party sub series are "Green Escort," "Waltzing Brawlers," and "Green Peaches." In Mario Power Tennis, during Peach's ending, Luigi is shown to be swooning over her alongside Mario.

Something worth noting is that Luigi has a history of dressing up as Princess Peach or even pretending to be her. Within Superstar Saga, Mario has Luigi dress up as Peach in order to steal back the beanstar. Not only does Luigi successfully disguise himself, but he is shown to perfectly mimic the princess's voice. Super Mario Adventures has Luigi swap outfits with Peach and even pretend to be infactuated with Bowser. Later, the two of them work together to free Mario and escape from the Koopalings. After this, Luigi admits to liking Peach's dress. The official description for the Super Crown for New Super Mario Bros. for the Nintendo Switch makes reference to this, via apology to Luigi for only Toadette being able to transform into Peach.

In a Japanese commercial for Super Luigi U, Peach is shown cowering in fear and calling for Mario. Suddenly, Luigi appears in her eye, with sparkles surrounding him. It is unknown as to why Peach is in this state or whether or not Luigi had something to do with it.

During the events of Super Princess Peach, Princess Peach saves Luigi. However, she is shown to barely have any regard for him when compared to other games. When rescued, Luigi is referred to as the 'Green Man.' Once Princess Peach saves Mario, she pushes Luigi out of the way, causing the man to faceplant. Though, she calmly walks next to him along with Mario and Perry the Parasol.

When Luigi is brainwashed into Mr. L, he becomes one of Count Bleck's minions. Thus, him and Peach are temporary enemies. Despite this, he is shown to be flirting with Peach in the Sammer's Kingdom, likely due to some form of memory wiping and his insistence on undermining everyone. Peach disregards his comments and demands he reveal his identity.

In the short Mario vs. Wario Nintendo Power series, Princess Peach finds a Samus doll that she wants for her birthday. When both Mario and Wario are told its already been bought by a man with a 'big, black mustache,' they presume it to be each other. As it would turn out, it was Luigi who bought it. After giving her the present, she rewards him with a kiss on the cheek.

“...Ooh, at Princess Peach's place, maybe? That'd be cool, huh, Bro? Maybe we should go visit Mushroom Castle! It has been a while. I'm sure the princess would be happy to see us.”
— Luigi, Super Paper Mario

Mr. L (Brainwashed Luigi) – “Hey there, gorgeous. Don't you know a chaos wasteland is no place for a stunner like you?”
Princess Peach – “I demand that you take off that mask and show us who you really are! Hmmpf!”
— Super Paper Mario

The ship typically pulls from the multiple hard modes in which Luigi is the protagonist. It acts as a counter to Mareach, in which Mario's younger brother takes his place. Some also believe that Luigi's personality to be more similar to that of Peach's, thus causing them to be more compatible to shippers.

A fairly common trope between shippers who seek a more grimdark version of the ship is that Princess Peach is cheating on Mario. Fan theories even go so far as to state they have even had children together. However, not only are Mario and Peach not officially dating, but Luigi is shown to be loyal to his brother. This belief has began to die down due to rebuttals.

Nonetheless, fan content of the relationship will usually have Princess Peach give Luigi kisses or cake in reference to her rewards in most games. 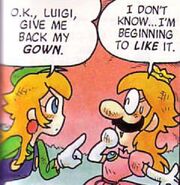