Luimon is the slash ship between Simon Belmont and Luigi from the Super Smash Bros. fandom.

As they are from different universes and are handled by different publishers, they can not meet. However, in Super Smash Bros. Ultimate, both Luigi and Simon Belmont are playable characters. In Simon and Richter Belmont’s announcement trailer, Luigi is fearing for his life, using his Poltergust Model G-00; earlier in the trailer, Simon is covered in a hood and is able to hear Luigi’s fearful scream. Luigi tried to fend off a mummy horde in Dracula Castle by using its Strobulb, as well as its function to fire toilet plungers; but his efforts failed. He runs away due to his failure to ward off. Luigi goes to another part of Dracula Castle, he would quickly turn around to see a statue figure moved its head and looked towards Luigi with flashing red eyes, acting as a warning to get out. The statue would release snakes that are part of its head, scaring Luigi away, being afraid for his life to be safe. He runs to another part of the castle, but he trips because his because of fear. Luigi would pick up and turn on his Poltergust, only to encounter a very frightening foe, the foe being Death. They can be found in the Castlevania series; they are usually be seen wielding scythes which they use to harvest souls. Death glares at Luigi; as he brought his last fright, Death slays Luigi with its scythe, turning him into a ghost/spirit, with his soul collected. Just as the reaper just gotten Luigi’s soul, they heard a noise, which would be an attack from Simon, using his Vampire Killer whip to attack Death. After recovering his whip, Simon took off his hooded jacket, and reveal himself as a playable character in Super Smash Bros. Right around the end of the announcement, Luigi (as a ghost), floats over his body before sinking back inside. As this is happening, Carmilla would show up outside the Castle, and Luigi screams for his life. Luckily, Nintendo has confirmed that Luigi is okay.

Simon and Luigi have many similar and opposing traits, which attract people to ship them. Luigi is scared of anything that he considers frightening and Simon is a veteran demon slayer. Simon can help Luigi fend off monsters as he has more experience slaying monsters. Both of them have very opposing personalities, like Luigi being sensitive and Simon could be seen as cold.

After the Announcement trailer, art between Simon and Luigi (with Richter being included sometimes), being protective towards Luigi became popular, as Simon saw Luigi like a son. Simon would be able to calm Luigi as Simon is able to protect him. In turn, Luigi could help Simon to learn new ways to fend off ghosts, while Simon could help Luigi to become stronger, with Richter also helping. In written fiction, the pairing could be seen as wholesome, as Luigi cuddles Simon for protection, and Simon gives much affection to him to show that Luigi is safe with him. 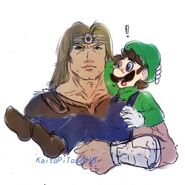 I've only had Luigi for a day and a half, but if anything happened to him, I would kill everyone in this room and then myself.
Community content is available under CC-BY-SA unless otherwise noted.
Advertisement