Lukadrien is the slash ship between Adrien Agreste and Luka Couffaine from the Miraculous Ladybug fandom.

Adrien and Luka originally didn't know each other very well, but when Adrien, as himself and not as Cat Noir, first meets Luka during the music festival in "Captain Hardrock", he welcomes him into the band. Where he uses his piano playing skills to serve as Kitty Section's guest keyboard player. As Adrien and Luka play, they glance back at each other, with a smile. Like he is with Ladybug, Luka doesn't know that Adrien is secretly Cat Noir.

In "Desperada", Adrien visits Luka and their friends on the Couffaine's boathouse when he and Kagami were originally meant to attend fencing class and ended up at the "wrong address". He sees Luka teaching Marinette how to play his guitar until she notices Adrien and goes to greet him and Kagami. When Jagged Stone later asks Marinette if she can recommend a guitarist to him and ends up picking Adrien, who isn't one, the rock star asks if Luka could do, and even as Marinette's struggling feelings for the two boys has her asking Luka if he can lend Adrien his guitar she agrees to, and just has Adrien was about to play it they get attacked by the titled villain. Luka helps Adrien to find a place where Desperada can't get to them before they go to help Ladybug get away from her, once they were safe underground the boys look for a place to hide, that only has Luka hiding while Adrien sneaks away to transform. A few minuets later as Cat Noir goes back into the room to "show" Ladybug where "Adrien" is "hiding", Luka notices that his friend isn't in the locker and asks the heroes if they know where he might be, Cat Noir get Luka to go back into hiding, and winks at him, before the cat-themed hero goes to help Ladybug "find" Adrien. After failing countless times as Aspik, the snake-themed superhero through the Snake Miraculous, and hands it back to Ladybug, Luka shows up and asks them what it happening. Adrien lists Luka's good qualities as he recommends that the bangle shaped miraculous should be given to him, as he is the true "perfect" person of for it, before darting off to retransform through the Cat Miraculous.

In "Party Crasher", Luka attends the Boys only Party that Nino and a few of his friends put together for Adrien, where he plays his guitar with a few of their other musician guests. When the title villain attacks, crashes the party and captures Ladybug, Luka as Viperion helps Cat Noir take on Party Crasher as one of his backup allies, with Pegase and Carapace. After the battle ended Luka helps Adrien and his friends to clear up his room.

The ship is believed to have began in "Captain Hardrock" when Luka welcomed Adrien to his band, as a guest member for the music festival, and the popularity of Lukadrien continued to grow after their paths crossed at the ice rink in "Frozer", where the two show no ill will towards each other when it came to Marinette, along with Cat Noir helping a deakumatized Luka to expose Bob Roth's crime of stealing Kitty Section's idea for XY's new song in "Silencer"; which is why fans have Lukadrien rival with the het ship Adrienette. Along with Lukanette and the alternate love interest ship, Lukagami.

When it comes to Adrienette or Lukadrinette, however, some have Adrien view Luka as a love rival for Marinette's affections, once he begins to develop feelings for her alone, consciously or unconsciously. As there have been sighs of Adrien possibly being jealous of Luka or slowly realizing his feelings for Marinette, from when he first saw them together at the ice rink. The same with their alter ego selves, since Marinette has developed a crush on Luka and a few fans believe in the possible chances of Cat Noir becoming jealous of Viperion (or Luka) for when it comes to Ladybug's affections.

The season three episode, "Timetagger", reveales that during their future adulthood the main duo have assembled a team of fellow Miraculous holders, and there is a possible chance that Luka might being one of its members.

Luka's Relationship with Adrien on the Miraculous Ladybug Wiki 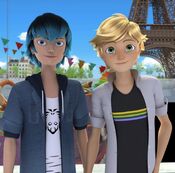 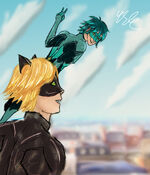 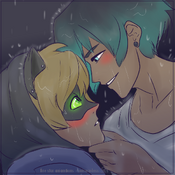 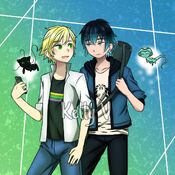 Lukadrinette refers to the ship between Luka, Adrien and Marinette