Lukadrinette is the poly ship between Luka Couffaine, Adrien Agreste and Marinette Dupain-Cheng from the Miraculous Ladybug fandom.

Marinette and Adrien both met Luka on his boat house during the music festival, and while Adrien is Marinette's long held crush, just as Ladybug is Adrien's, Marinette had began to develop feelings for Luka shortly after she met him; who also has a crush on Marinette. Because of this Marinette begins to question her old and new feelings for the two boys, which is why she froze in front of them when they both offered to help Marinette get up from the spot she ended up in when she sild and fell on the ice, as she felt on her end that she has been placed in a position where she might have to decide between the two. When Luka notices that Marinette has feelings for Adrien, he tells her that she should go and talk to him, Marinette thanks Luka for his advice with a kiss before she dashes over to Adrien.

In "Desperada", Marinette's heart faces another struggle between the feelings she has for both boys. As when Adrien walked into the room Luka was teaching Marinette how to play a few notes on his guitar she became worried at what he might be thinking, as Adrien had brought Kagami and had made a foul of herself when she greeted them. A moment later Jagged Stone spots Marinette and ask her if she knows anyone who is a guitarist that can team up with him, despite knowing that Luka is one and has been playing since he was young she recommends Adrien, who is more of a pianist and has little guitar skills. Even though Adrien tells her this and Jagged asks Marinette about Luka, she ends up asking Luka if Adrien could borrow his guitar. When the titled Akumatized villain attacks them, the two boys notice that Ladybug is struggling and go to aid her, until the three are able to get away.

Ladybug thanks them for their help, before reminding them that they did was dangerous as well as brave. She then leaves them to fetch the Snake Miraculous from Master Fu, Ladybug tells Cat Noir that she plans to give it to Adrien, as she doesn't know that her partner and crush are the same person. Since Cat Noir knows that he can't tell Ladybug this, he takes her to the place where he earlier left Luka, as it was also the place where Adrien is purport to be hiding, before they go to find "not", after Cat Noir gets Luka back into his hiding place. After de-transforming and catches up to Ladybug, she hands him the Snake Miraculous and uses it to become Aspik, but after Aspik uses all of his second chances to impress Ladybug while trying to fight Desperada, Adrien takes it off and hands it back to her as he isn't the perfect one for it. Luka on the other hand is and both Ladybug and Adrien agree that the Miraculous should be entrusted to him, as he uses it to become Viperion. Unlike Aspik, Viperion was careful with his powersuper wisely and once he found away for them to defeat Desperada, he uses second chance so he can share his plan with the main duo before they can set it into action.

“It's way more complicated.”
— All three at the same time in Wishmaker

The ship could simply be due to Marinette having romantic feelings for both boys, who are friends of hers and have their own romantic feelings for her. Some have Lukadrinette rival with Adrigaminette, since they both serve as compromise ships. Some have Adrien view Luka as a love rival for Marinette's affections, as there have been sighs of Adrien possibly being jealous of Luka or slowly realizing his feelings for Marinette. Because the leaks about Marinette, Adrien and Luka's upcoming superhero forms were reveled at the same time, it inspired fans to do fan artwork of Cat Noir, Multimouse and Viperion together. As Luka already knows both Marinette and Adrien’s secret identity and he decided to keep it in secret, man fans theorized that Luka has feelings for both of them.

In “Ephemeral” many fans got really shocked but yet hiped when Marinette (transformed into Ladybug) called on Luka (Viperion) to help her discover Cat Noir's identity but informing about the identity rules when the information was relayed to him, and he still accepted as he was pretending he didn’t know Chat Noir is Adrien, and in the was suppose to use his Second Chance to make her forget. Bet when the plan commenced Ladybug didn't follow through and when he asked her why she said she wanted to know what was going to happen next after knowing Chat Noir is Adrien, letting now Ladybug knowing his identity as Marinette. Later on in the episode he supported and tried to help both Adrien and Marinette, as the world was going to re-start. At the end the Snake’s kwami used his power and everything went back on it’s time, but leaving yet again fans really shocked, since Luka kept the secret yet again.

Thanks to the fact that Luka is keeping their secrets, both Marinette and Adrien can live a normal as students and fight as Ladybug and Chat Noir. 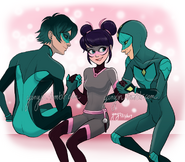