Lukagami is the het ship between Luka Couffaine and Kagami Tsurugi from the Miraculous Ladybug fandom.

Luka and Kagami met each other when they both went to the ice rink with Marinette and Adrien as their "dates", where Luka and Kagami displaying their excellent figure skating-like skills to their inveigle companions in "Frozer".

Even though Luka and Kagami didn't interact with one another in "Desperada", Luka does agree to use the Snake Miraculous to save Kagami and Desprada's other captives. Just as Kagami had used the Dragon Miraculous' power to save someone from a villain's grasps in "Ikari Gozen", and because she doesn't know what Luka's temporally superpower is she believes that love is something that people can't have a "second chance" at. Even though Viperion's power disproves this.

In "Miracle Queen", both Luka and Kagami displayed an act of selflessness as they get Marinette and Adrien away from Miracle Queen's wasps, but end up getting themselves placed under the villain's mind control. Luka and Kagami are later seen standing beside one another as they bow before their queen. The two were later freed from her control when Ladybug and Cat noir defeated Miracle Queen. Even though Chloé's actions have placed Luka in the same type of danger that Kagami has been in since the events of "Ikari Gozen". With Hawk Moth knowing that the two are Viperion and Ryuko.

Since Luka and Kagami are both alternate love interests for Adrienette many who wanted the ship to become canon paired the two together. After season three many fans hope that the two would meet each other as their alter egos. Their hero identities caused Lukagami to become much more popular, than it originally was when the ship first began during season two. Fans see that their Miraculous could link Kagami and Luka together, that is why some of the ship's fan art make references to their snake and dragon hero themes. Along with depicting Luka and Kagami as a male Ladybug and female Cat Noir, for fun.

The events of both "Frozer" and "Miracle Queen" allowed fans to see that Luka and Kagami aren't so different from one another when it comes to those they care about, in which would allow them to get along with one another and helps to give the ship support. After "Desperada" aired, it gave fans hope that future episodes may give Luka and Kagami chances to properly get to know one another. Along with some finding it ironic that Kagami had unknowingly referenced Viperion's superpower of Second Chance, as some began to believe that it could be a hit of Luka possibly becoming Kagami's second chance at love. While a brief moment from "Mayura" got a few Lukagami fans to have a little joke on Tumblr about how Kagami met her "future mother-in-law" [1]. But it hasn't stop fans from having Luka's mother like Kagami, while Kagami's wouldn't be too sure about Luka.

Some fan works have Luka and Kagami bonding over them not ending up with Marinette or Adrien and work through their rejection together. Some art will have the two wearing Japanese style clothing. A common trope is having Kagami falling for Viperion before falling for Luka. There have even been times where fans have it the other way round with Luka falling for Ryuko before falling for Kagami. Another thing explored is Luka getting Kagami into music. As he shows her, her own inner song. Because of Luka's gentle nature, fans see him helping Kagami to lower her shield and become more open around people, which is why they have Luka being the one to approach Kagami.

After season four inspired fans to start shipping Luka with Zoé, however, the attention that was on Lukagami was later moved onto Lukazoe. Even there has still those who support Lukagami, since the two breaking up with Marinette and Adrien has given loyal Lukagami fans hope that the ship might become canon one day.

On AO3, Lukagami is the third most written ship for Luka and Kagami. While fanfiction.net has 118 with only 15 placed under pairing. Lukagami also has support on other fan supporting websites, like Tumblr, Deviantart and YouTube. 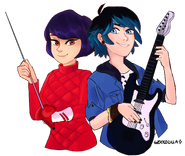 Luka Kagami I Was Born With a Broken Heart