Broken Up/Friends; Feelings on Luka's side

You’re the most extraordinary girl, Marinette. As clear as a musical note and as sincere as a melody. You’re the song that's been playing in my head since the first day we met.
—Luka's confession

Lukanette is the het ship between Marinette Dupain-Cheng and Luka Couffaine from the Miraculous Ladybug fandom.

Luka falls in love with Marinette at first sight, while Marinette began to develop an on and off crush on Luka after listening to his music, becoming smitten with his kind words and gestures to her and spending sometime with him. Luka also appears to have respect for Ladybug, unaware that the spotted heroine and the young, sweet girl he is in love with are in fact the same person. Marinette's feelings for Luka, however, causes her heart to struggle with the long held feelings she has for Adrien Agreste.

Marinette wasn't aware that her classmate and friend, Juleka has an older brother until their mother had asked Marinette to fetch Luka from his cavern, so Kitty Section could start playing for the music festival from the deck of the Couffaines' boat house. As Marinette walks into his cavern room she finds him meditating on his bed with a guitar pic in his hand, but when he opened his eyes and smiled at her she became tongue tied and got some of her words wrong as she introduces herself to him. Luka charmingly mimics her stuttering words as he tells Marinette that it is nice to meet her, but she became embarrassed of rehearing her stuttering sentence and Luka apologies for it when he felt that his well meaning words might have upset her before he plays a few notes on his guitar to her, as music allows Luka to truly expresses himself. Marinette is taken by his music as she places hand over her own heart while listening to him play, with a hint of emotion within its notes. Luka notes that Marinette is a mysterious one that he'll like to uncover it to better understand her. When Luka's mother gets akumatized and gets upset that Kitty Section or their friends would serve as her crew and chains them up. Because Marinette and Luka were chained together, she able to make Luka think that she had picked the lock with the guitar pick he gave her as a gift, and when Captain Hardrock came to check on her captives Luka fakes Marinette's escape as he hides her in his room while Captain Hardrock recaptures him. To save Luka and the others Marinette transforms into Ladybug as she goes to fight Captain Hardrock with Cat Noir. During the fight Cat Noir tells Ladybug that he'll told her off while she goes to save Luka and their friends. Once Luka was freed he asks Ladybug if Marinette is alright, to which has Ladybug to tell him that it was Marinette one who alerted her to the danger they were in. Hearing this Luka comments on Marinette's bravery, which causes Ladybug to blush. After the Captain Hardrock was defeated, Marinette spends the rest of the day watching Luka play beside his band mates.

Marinette is suffering troubles of the heart and shares her thought with Luka who cheers her up with his music. She then invites Luka to join her, Adrien and Kagami Tsurugi at the ice rink. After falling, both Luka and Adrien hold their hands out for Marinette to help her up. She hesitates to choose whose hand to take, though she does not have the chance to take any of their hands as Kagami is the one that helps her up.

Marinette and Luka's band hear about a compaction that can serve as Kitty Section's big brake, as well as a way to showcase the costumes that Marinette plans to make for them, a fact that causes Marinette to blush after Luka suggests it to her. As they get themselves and the stage clothes ready for their submitted video, Marinette and Luka spend sometime together, by Marinette watching the band practice, showing Luka her sketches and making the said costumes while they are in the same room together. After their video was sent, Marinette became worried that them not getting a response from Bob Roth was due to him not liking their video, but Luka tries to reassure Marinette that Bob Roth will get back to them soon. When they saw XY playing a rip off version of their song while wearing a self made copy of Marinette's design, they realized that Bob Roth and his son had stolen their ideas. To get justice for Kitty Section, both Marinette and Luka go to confront the Roths about getting them to confuse the truth of their theft, but when Bob denied his crime Luka could see that they were wasting their time with them and that he and Marinette should. Marinette on the other hand isn't one to give up and refused to allow the Roths to get away with what they did to them, while Luka watches her stand stand up for him and his band, before hearing Bob Roth threating Marinette caused him to become angry enough to attract Hawk Moth's attention. Now as the voice stealing supervillain, Silencer, he promises Marinette that he will not harm her and that he'll get justice for their friends, Marinette however could see that Silencer's approach is of revenge and tries to talk him out of it, but Silencer disagreed and confessed his love for her before going after Rob Roth. Marinette was stunned by Silencer's words and had thought that hearing a decoration of love from a supervillain was a little strange, before transforming into Ladybug. As Ladybug kept Silencer away from Bob Roth, she ends up losing her voice to her akumatized friend and is unable to summon her Lucky Charm or transform back. With help from Cat Noir, they are able to trick Silencer to use Ladybug's stolen voice to summon the Lucky Charm and use it to defeat him. After Ladybug tends to the back to normal Luka, the two smile at one another as they watch Bob Roth unknowingly confess his theft of Kitty Section's ideas on live TV. Now that Luka's band has the rights to their ideas back, Bob Roth gives Kitty Section their big brake to save face, before Luka goes to perform on TV Marinette asks him about the words he told her as Silencer. Even though Luka has no memory of what happened or what he had said to her, Luka retells Marinette his decoration of love.

When Marinette was making her way to the Bourgeois couple's twentieth anniversary in, Luka spots her on his bike, while working his song about her, he officers to give Marinette a left to the hotel. After they got to the said location, Marinette thanks Luka for the ride before heading inside. Their paths cross later on, after Marinette realizes that Adrien cares about Kagami and that Master Fu is no where to be found, she ends up crying on Luka's shoulder as he tries to comfort her. After Chloé Bourgeois becomes Miracle Queen and sends out her wasps, Luka shields Marinette from them and gets placed under Miracle Queen's mind control, while Marinette was able to get away as Aqua Ladybug. In order to save Luka and the rest of Paris from Miracle Queen, Ladybug will have to fight a mind controlled Viperion, but Cat Noir helps Ladybug to ensure that Viperion sits out the rest of the battle as they take the Snake Miraculous from him. After everyone was freed from Miracle Queen, Luka joins Marinette and her friends near one of the city's bridges, as the two sit beside each other. Even though Marinette tries to put on a brave face after the day she had as she about to enjoy the rest of it with Luka, he could still tell that her mind is less where.

Marinette and Luka go on a date and almost kiss but because of her responsibilities as Ladybug, Marinette has to leave which interrupts their date and makes Luka feel sad and disappointed. Finally reaching his limit when he asks Marinette to tell the truth to him to which Marinette says she can't. This causes Luka to get akumitised into "Truth". While akumitised he tries to find out what Marinette is hiding from him by asking her friends Alya and Mylene what her biggest secret is, which they reply by telling him that she is in love with Adrien, that causes him to get frustrated because he already knows that. After he gets deakumatized Marinette and Luka talk. Marinette then says that she does not want to lie to him but can't tell the truth either. Luka than forgives her and hugs her yet in the end of the episode they break up.

After their breakup, Andre gives Luka and Marinette a sweetheart ice-cream. Luka says, "We're buddies," when referring to him and Marinette, Later in the episode, Luka discovers the identity of Ladybug and Cat Noir. After the akuma is purified, Ladybug takes back Luka's miraculous and asks if Luka found out her and Cat Noir's identities. Luka lies and says he didn't.

Marinette is invited to Juleka and Luka's birthday party, and Marinette asks Juleka to make sure that Luka doesn't come since Marinette still feels awkward about the whole situation. Juleka doesn't stop Luka from coming to the party. Upon seeing Luka at the party, Marinette freaks out and runs away. Luka gets sad and is about to be akumatized, but his friends assure him that Marinette doesn't hate him. This stops Luka from being akumatized, and Luka's parents are instead akumatized.

After the akuma is purified, Luka and Juleka's party continues. Luka asks Marinette when she's going to tell Adrien how she feels. Luka tells Marinette that if Juleka was able to make her voice heard, then he is sure that Marinette will be able to, too. Marinette apologizes for avoiding Luka, and Luka admits that it hurts more not seeing Marinette than it does seeing her. Marinette and Luka agree to be buddies.

“Shh, listen, the song of the water. If you listen carefully at this very spot under the bridge, you'll hear a melody.”
— Luka calming Marinette

“You know why I broke up with Luka? Not because I don't like him, he's amazing! It's 'cause there's something that I can't tell him.”
— Marinette explaining to Alya about the break up before telling Alya she is Ladybug

The ship became popular shortly after their first meeting in "Captain Hardrock", along with their ice skating "date" in "Frozer" and Luka giving Marinette his decoration of love for her, twice as both an akumatized villain and his revert back to normal self, in "Silencer"; which is why fans have Lukanette rival with Adrienette. Along with Lukagami.

Because Marinette and Luka's new superhero forms and titles were revealed at the same time, it inspired fans to do fan artwork of Multimouse (Marinette through the Mouse Miraculous) and Viperion together; despite knowing that snakes eat mice (as do cats). 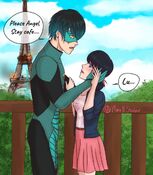 Can I Call You Tonight? Miraculous Ladybug Lukanette CMV