View source
watch 01:55
Cobra Kai Season 4 - The Loop
Do you like this video?
Play Sound
This article is about Amber and Lumine. You may be looking for the ship between Amber and Aether.

Lumber is the femslash ship between Amber and Lumine from the Genshin Impact fandom.

Amber, with her outgoing nature, offers to help Lumine to find her missing brother. She creates missing posters (which can be found near the bar in Mondstadt City) as a way to find Lumine's missing brother.

In act I of Mondstadt's Quest, Lumine first met Amber just outside of the City of Mondstadt. Amber is immediately suspicious of Lumine and Paimon because they don't look like citizens of Mondstadt, but grows closer to her. She escorts Lumine to the city, but the both of them came across hilichurls and the both of them fought the hilichurls together. After they both fought the hilichurls, Amber thanked Lumine for fighting with the hilichurls. As they finally went to Mondstadt, Amber told her about the threat of the dragon and offering to protect her. Amber also said to meet her at the high grounds, after Lumine went to the high grounds. Amber gifted her a Wind Gilder as an appreciation for helping her fight the hilichurls.

In act III of Mondstadt's Quest, After Lumine defeated Dvalin, she went back to Mondstadt. She sees Amber in front of Mondstadt, Amber said that Jean told her all of Lumine's heroic deeds. She then says she wonders if she'll ever get a opportunity like that, but she doesn't mind since Lumine did all the credits for how she resolved the crisis. She says that when she brought Lumine to the city that day, she was doing her duty as an Outrider. Amber said to Lumine to have a meal at the Good Hunters before saying goodbye for Lumine to move on to Liyue.

In Amber's Story Quest, in act I. Lumine first meets Amber where the Anemo Statue is, Amber, asks how is Lumine's wind gilding experience doing right now. Amber tells Lumine that she needs a gliding license to legally glide in Mondstadt, so Amber gave a book that was supposed to be the gliding manual book but it was a different book. After Lumine read the book, Lumine went to Windrise since that was where Amber said to meet her. After Lumine has met Amber at Windrise, Paimon tells Amber about the book. Amber didn't know what Paimon was talking about so she told Lumine to hand in the book, Amber was surprised since it wasn't the gliding manual book. Amber apologizes to Lumine, Amber knew that Lumine would know how to glide so the exam now started.

After Lumine finished the exam, Amber said that Lumine nailed it. Amber then says the next part would be at Mondstadt so Lumine went to Mondstadt and found Amber, The exam started. After Lumine finished it, Amber said that they will now move to the final exam. Lumine was gonna finish the exam but got interrupted, Otto was about to arrest Lumine but Amber stopped him and says that she was her gliding instructor. Otto was sorry since it was a bad time to take the exam because there was a person named "Raptor" and Otto thought Lumine was his partner, Amber tells Lumine that she will go with her to find Raptor. After Amber and Lumine defeated Raptor, Amber said to meet her at the Cathedral to claim Lumine's Gilding License.

This ship was one of the first popular ships in the Genshin Impact fandom due to the fact that the two characters meet and establish a good relationship very early on in the story. It is overshadowed mainly by ChiLumi, one of Lumine’s most popular ships, and rivaled by the increasingly popular EulAmber. On AO3, there are over 310+ works revolving around this pairing. Moreover, many people, shippers or not, consider Lumber to be the most logical ship in Genshin Impact with Jeanlisa and Beiguang if we are to believe some answers under the artworks featuring Lumine and Amber.

But even though a lot of people seem to be looking to the other ships, several other people prefer to keep adding content to the ship Lumber. More and more fanfics were added and are still being so. There is also a lot of artworks that were done in response to the ship of Eula and Amber. Some artists have portrayed a jealous Lumine or a panicked Amber who explains to Lumine that she misunderstood the whole thing and that she will never leave her for another. But the best example of an answer is @wryyyyn_'s comic on Twitter that shows Eula as a protective big sister who only wants the best for Amber who is in love with Lumine which makes sense since in her voice line about Amber, Eula explains that the Knights of Favonius see her as Amber's big sister. 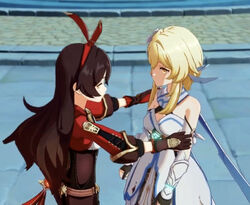