• A Friend in Need — Paimon always cheers Lumine up whenever she's sad and has been the closest friend to her considering the fact that Paimon was also the one who guided her to Teyvat.
• Friendship Moment — There are a lot of bonding moments between the two.
• True Companions — Lumine and Paimon have been each other's companions for long time, adventuring through the 7 nations in Teyvat to find Lumine's brother and finally reuniting with him.
• You Are Not Alone — Paimon has been with Lumine from at the start of her journey, promising and wishing that she will find her brother.

Lumimon is the friendship between Lumine and Paimon from the Genshin Impact fandom.

Lumine caught Paimon by a fishing rod when Lumine lost her brother due to an unknown god. Paimon joins on her journey as a kind-hearted sprite guide. The both of them are traveling all the nation around Teyvat to find Lumine's sibling/Aether. Paimon and Lumine become good friends on their Adventures with each other.

In Lumine's Voicelines, Paimon is included as well in every voicelines that Lumine has, this goes the same to her sibling, Aether. In Lumine's Voiceline about Sisters, Lumine talks about Lisa and Amber acting like sisters. Saying that, Lumine tells Paimon that Lisa is the older sister who would give the younger sister errands, making Paimon telling Lumine that she is like her young sister due to the fact Lumine does errands. In general, Lumine is seen to tease Paimon a lot from quests to voicelines.

In all of the Archon Quests, Paimon is always there with Lumine. Paimon guides Lumine to a Statue of the Seven in the prologue, When the both of them first went to Mondstadt, guided by Amber. When Amber asks about Paimon, Lumine was able to tell that she was emergency food which will make Paimon mad, though Amber then guided the two to Mondstadt. Paimon and Lumine ate at Good Hunters. The fanbase sometimes talks about Lumine's face whenever Paimon keeps talking about food nor when Paimon is being "stupid".

In Inazuma's Chapter, in Act 2. When Lumine was defeated by the Raiden Shogun, Lumine was unconscious, Paimon fled towards her and tried to perform a CPR. Paimon also tried to tell her to wake up but then gotten scared by the Shogun as if she was about to execute Lumine. Lumine was quickly then saved by Thoma, and flee away from the Shogun.

In Act 1 of the Bough Keeper: Dainsleif Quest, When Lumine introduced herself to Dainsleif, Lumine had another chance to call Paimon emergency food or my best chum, when Lumine tells that Paimon is her emergency food, it made Paimon again mad and tells that's not true and she knows it. Dainsleif tells Lumine that it's great to have someone to accompany her on her travels since the two, Lumine and Paimon always go to any places together. When talking about the Abyss Order, Lumine tells that she can defeat those monsters and Paimon then agreed with Lumine saying that they're super duper strong.

Lumine and Paimon then swiftly left the ruins and sees Dainsleif, they then went back to the ruins again, when inside the ruin, the Abyss Herald then appeared again making Lumine having to defeat him, though when trying to defeat the Abyss Herald. The Abyss Herald tried to flee but Dainsleif stopped him, yet got interupted by Aether, Lumine's brother. While talking about Khaenri'ah, Aether then left while Lumine was trying to get to Aether. Leaving Lumine sad, though Paimon confronted Lumine saying that they gotten some really useful information's, Paimon then tells Lumine that their journey is not over yet and telling that if her brother wants her to "reach at the end of her journey", then show him what she's made off. Paimon then lend her hand to Lumine, Paimon now calls Lumine as the Traveler being this the only time Paimon was ever to call her Traveler.

In Albedo's Story Quest, when Lumine was finished defeating slimes for Albedo. Albedo mentions that Paimon was watching Lumine for the whole time when she was fighting the slimes.

Lumine – “Lisa and Amber feel a bit like sisters.”
Paimon – “Huh? Why's that?”
Lumine – “Amber often runs errands for Lisa. Older siblings asking their younger siblings to do things for them so that they can slack off is a rather common practice... But my brother and I are the same age, so we had to decide these things via rock-paper-scissors.”
Paimon – “Whoa. So, doesn't that make you my younger sister?”
Lumine – “What do you mean?”
Paimon – “Well, since Paimon floats, you're the only one who can "run" any errands!”
Lumine – “...Seriously?”
— Lumine's Voiceline about Sisters

Lumine – “Speaking of Fischl, she also claims to be a "visitor from another world"... We're similar in that way. We even bring a pet along with us.”
Paimon – “Pet? Now, wait just a minute, here...”
Lumine – “But her raven, Oz... He looks cool, and is polite to boot. More importantly, he can both scout and fight — very useful indeed. Maybe I should make arrangements with Fischl to trade companions once in a while for, say, a week or two at a time. It should be quite interesting.”
Paimon – “Hey! Doesn't Paimon get a say in this!?”
— Lumine's Voiceline about Pets

Paimon – “It's hard to talk about the recent events in Inazuma and not mention the Vision Hunt Decree. But you don't have a Vision, so you don't have to worry about losing one. On the flip side, if you are caught by the Tenryou Commission, Lumine, you also can't surrender your Vision in exchange for your life...”
Lumine – “I can tell them that you are my Vision.”
Paimon – “Another reason to have Paimon around... Wait, WHAT!?”
Lumine – “Don't worry, I wouldn't let them take you, Paimon.”
Paimon – “That's more like it.”
Lumine – “We'd just go to jail and suffer punishment together...”
Paimon – “Uh... W—Well, if that's how it would go down, then maybe you should hand me over to them... Wait a minute! How about we just don't get caught in the first place?”
— Lumine's Voiceine about the Vision Hunt Decree

Paimon – “Only the ones who have the will to fight back are allowed into the Resistance! Huh. In that case, Paimon also qualifies as a member.”
Lumine – “And what exactly are you trying to resist, Paimon?”
Paimon – “Paimon has been resolutely fighting against the fate of being squished all this time!”
Lumine – “Then you probably won't get in.”
Paimon – “Why? Is it because Paimon isn't fighting for the same cause as the Resistance?”
Lumine – “It's because you're fighting for a lost cause, I'm afraid...”
Paimon – “*sob* Y—You meanie!”
— Lumine's Voiceline about the Resistance

Paimon – “Tanuki are really mysterious creatures.”
Lumine – “I think they are really cute.”
Paimon – “Yeah, they're cute... until they start talking.”
Lumine – “Hmm, I wonder... If you couldn't talk, would you appear to be more mysterious and noble?”
Paimon – “Are you trying to mock me?”
Lumine – “*randomly humming innocently*”
— Lumine's Voiceline about Tanuki

Their friendship grew immensely as the all of the archon quests has been released. Especially during in Inazuma's Chapter, Act 2. Their relationship isn't being treated as a femslash ship but more like a friendship, due to the fact Paimon's appearance seems like a young girl and it can get controversial if Lumimon is treated like a femslash ship. This also includes Paither as well since Aether and Lumine are both siblings, there are lots of fanarts depicting the two. There are currently 95 gen fanfictions that includes the two on Archive of Our Own.

There's also a popular theory that Paimon is the unknown god due to the fact Paimon's appearance is also a bit similar to the unknown god. Making that, Paimon willing to betray Lumine at the end of her journey leaving into her sadness and betrayal since she was her companion and was always there for her even though she may be useless on her journey.

In fanfictions, Paimon is mostly portraited as a wingman or a third wheel to Lumine and her respective ship. Neither ChiLumi nor XiaoLumi, any ship that includes with Lumine possibly. 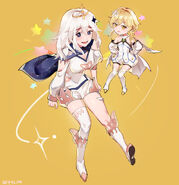