Lumity is the femslash ship between Luz Noceda and Amity Blight from The Owl House fandom.

After meeting Luz in 'I Was A Teenage Abomination' Amity takes a disliking to her, after Luz pretended to be Willow's abomination causing Amity to lose her top student badge.

In 'Covention', Luz challenges Amity to a witches' duel, and their agreements are sealed with an everlasting oath. Due to Luz not knowing many spells at the time, Eda decides to cheat. When it's revealed that Lilith also cheated, Amity runs away, causing Luz to go after her. Amity blames Luz for making her look like a fool in front of the Emperor's Coven, and demands that Luz confess she isn't a real witch. Luz shows Amity her light spell, and Amity makes the oath unbound, letting Luz continue learning magic.

When returning Eda's books in 'Lost in Language', Luz finds Amity reading to kids, and hopes that she can befriend Amity. When she tries to approach her Amity tells her to go away, because everytime Luz is near her, she gets in trouble. When Luz is caught with Amity's diary, Amity takes it away and calls Luz a bully. After the two of them fight off Otabin, the character from a book that Amity loves, Luz lets Amity borrow her fifth Good Witch Azura book. Amity says that she hasn't been the friendliest witch and that she would think on that.

In 'Adventures In The Elements' Amity and Luz seem like great friends. Amity tries to make sure Luz doesn't get hurt by entrapping her in a pink barrier. After Luz and Amity save Emira, Edric, and Eda, Luz asks Amity to start a Good Witch Azura book club, and Amity blushes when asking if it could be a secret club between the two.

In 'First Day', Amity greets Luz when she arrives at school and gives her a high five. Later in the episode, Luz begins to explore the doors of the secret room of shortcuts and finds Amity talking to herself. Amity is visibly nervous about something, and then you can hear her say "so you two go to the same school now, that doesn't change anything" and sighs.

When Amity accidentally sets pictures of Willow's memories on fire in 'Understanding Willow', she and Luz go inside Willow's mind to fix them. Amity is seen blushing at Luz twice: once while Luz is motivating her to keep fixing Willow's memories, and again after receiving a hug from Luz.

In 'Enchanting Grom Fright' Amity is selected to be Grom Queen, the Boiling Isle's equivilant of Prom Queen, meaning she'll have to fight Grometheus the Fear Bringer, also known as Grom, a demon that shape shifts into someone's worst fears. Amity tells Luz that she doesn't want her fear to be known, as it's too embarrassing. Luz feels bad that Amity has to fight Grom, so she decides to take Amity's place as Grom Queen. Before the fight, Amity thanks Luz, telling her that she's amazed at how fearless she is, as Luz has done things Amity couldn't. Amity and Luz also flirt before Luz has to fight Grom, with Luz asking if Amity is going soft on her. When Luz runs away from the battle, Amity follows her into the forest and tries to protect Luz. Grom attacks her, and Amity's worst fear is seen as being romantically rejected by someone unspecified. Amity and Luz then waltz together, where they are portrayed to be extremely close while doing so. After their dance, it is revealed to the audience that it was Luz who Amity had been planning to ask out to Grom, but didn't out of her fear of rejection. At the end of the episode, many Hexside kids are shown in Grom photos, one including Luz hugging a very blushy Amity.

The intensity of Amity's feelings for Luz is seen in 'Wing it Like Witches'. Throughout her interactions with Luz in the episode, Amity is shown heavily blushing, and repeatedly fumbles over herself, verbally as well as physically, even when Luz does as little as calling her name. When Luz asks Amity if she wants to help her defeat Boscha at Grudgby, Amity panics picturing she and Luz on the same team, and Luz in a cute uniform, sweating. She admits later in the episode that she loves the dumb side of Luz, quickly taking back her statement a few seconds later in an attempt to hide her feelings from her peers. Luz, Willow, and Amity's final play to defeat Boscha's team results in Amity injuring her leg. Luz decides to help Amity by carrying her, causing Amity to nervously blush.

The ship first began to gain momentum following the episode 'Covention' as it showed there was more to Amity's character besides being antagonistic towards Willow and Luz. The ship got even more attention following the release of promo images for the episode 'Enchanting Grom Fright', a Prom based episode that showed Luz and Amity having a moment together and a hallway while in formal wear. This is why most of the ship's recent fanart is based on the said episode and the Lumity moments from it.

Fans have also drawn parallels between Lumity and DiAkko from Little Witch Academia thanks to the similar setting of a magic school and their rivalry turned friendship. Along with there being fans who commonly compare Lumity with Catradora from She-Ra and the Princesses of Power, since it too has a dance scene episode that fans see as a parallel to Enchanting Grom Fright, and there being other similar moments between the two ships and their animated shows. 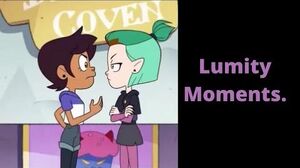 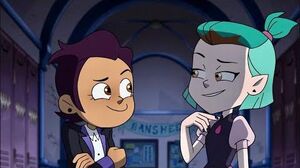 Willumity refers to the ship between Luz, Amity and Willow Park

Retrieved from "https://shipping.fandom.com/wiki/Lumity?oldid=238029"
Community content is available under CC-BY-SA unless otherwise noted.