• Twofer Token Minority — both of them (!) and of course an underrepresented relationship (as well as individual characters)

Mackson is the slash ship between Miller and Jackson from the The 100 fandom.

BECCA'S ISLAND AND THE BUNKER YEARS

Jackson and Miller join Abby's mission to find something useful to create nightbloods at Becca's lab. Once they arrive, they're caught in the crossfire of Becca's drones and Jackson's hit. Miller helps Jackson and protects him, hiding from the drones until Raven can shut them down. As they prepare to leave the island, Jackson expresses interest in Miller and - later in the episode "DNR" - it appears as if they have become intimate. They are seen together again in the episode "The Chosen", hugging and appearing to have become close.

We see them again in the episode "The Red Queen", taking place about 47 days after Praimfaya. Jackson and Miller have become a couple. Abby tells Jackson that she is happy that he's in a relationship with Miller, and Kane later makes a comment indicating that Jackson and Miller love each other. At the episode's end, Miller tells Jackson: "You're a healer, not a fighter. That's why I love you," before they embrace and kiss.[1]

They are seen together a few times, in the desert while Wonkru attempts to get to the valley, kissing before Miller departs on a scouting mission.[2] At one point Jackson uses medical terminology, to which Miller quips, “English, Jackson.”[3]

Perhaps because Miller and Jackson aren't seen together a lot, there are no examples of conflict in their relationship. From the time they first get together they're only seen appearing very close, supportive, and affectionate with each other.

After waking up from 100 years of cryosleep and finally arriving on Sanctum, Miller expresses regret for things he did in the bunker, and Jackson consoles him.[4] When their people are later allowed to remain on Sanctum, they can be seen cuddling.[5] When Jackson is taken aboard the ship by the Primes, Miller is distraught. He even stands up to Blodreina - who he used to follow without question - in demanding that they get Jackson back. Jackson luckily returns unscathed and they reunite with a kiss.[6]

After Abby's death, Jackson struggles with the death of a the woman who was a mentor to him.[7] Miller and Jackson later sit at a table in Sanctum's bar and discuss his feelings as they hold hands.[8]

THE FINAL EPISODES OF THE 100

They are reunited towards the end of the season with a hug. We later see them in bed together inside the bunker. Jackson tells Miller he'd be happy to stay here since everyone they care about is here. Miller misses Bellamy, and worries that his father wouldn't forgive him for some of the things he's done. Jackson tries to reassure him and they kiss.

In The Dying of the Light, they are separated again when Jackson returns to Sanctum to treat Emori's injuries. Murphy reassures him that they will go back for Miller. In the final episode, The Last War, Miller decides to reunite with Jackson on Sanctum rather than fighting the last war. He tells Jackson that he's not leaving him again and whatever happens next, they stick together. Later, they are devastated at the loss of Emori and Murphy, and they slowly dance together to the same music that Emori and Murphy are dancing to in their mindspace. At the episode's conclusion, they transcend along with everyone else but decide to do as the other main characters - join Clarke on earth and live out their mortal lives there.

Miller and Jackson are both secondary characters on The 100 and thus neither has much screen time. However the fandom seems generally favorable towards their canon relationship.

Nathan/Eric on Fanlore
Nathan and Eric on The 100 Wiki

The Blood Of Sanctum

Shifting Sands
Add a photo to this gallery

Red Queen
Add a photo to this gallery 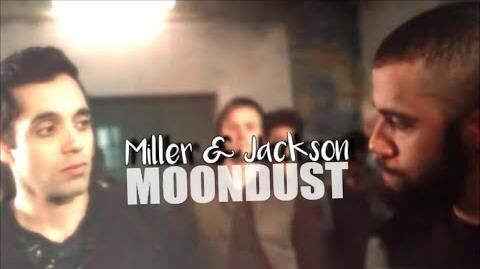 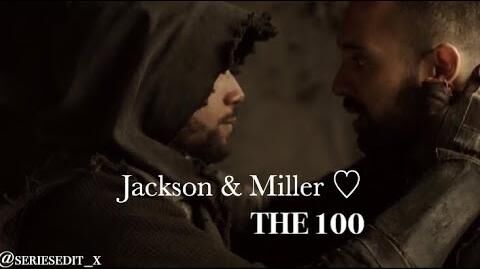 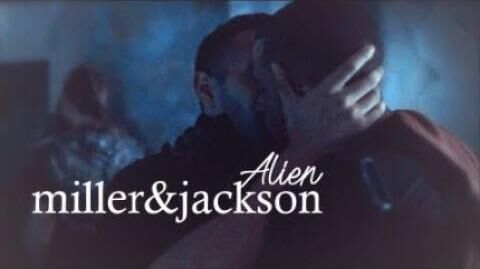 "There's a softness that I got the opportunity to carry around and play with. There is a genuine concern – a care and a love between [Sachin and I] that just really translated to the screen, and I tried to use that opportunity to give Miller a softness and a public vulnerability that we've never had the opportunity to see. [...] It's the most authentic thing I've ever done"[9]

Retrieved from "https://shipping.fandom.com/wiki/Mackson?oldid=243162"
Community content is available under CC-BY-SA unless otherwise noted.