MakoHaru is the slash ship between Makoto Tachibana and Haruka Nanase from the Free! fandom.

Makoto and Haru are childhood friends and best friends. Makoto often knocks on Haru's door in the morning to get him out of the bathtub so that they can go to school. They always walk to school together and have been on the same swim team since they were children. They are often depicted reading each other's "minds," showing their close bond. Makoto often acts as a communicator for Haru, since the latter does not speak often or publicize his emotions.

Makoto also acts as Haruka's "caretaker" and fusses over him quite a bit since the latter doesn't care about much besides water and swimming. He tries to restrain Haru from dipping into every body of water he sees and often talks for him when Haru doesn't know what to say in social situations.

In turn, Haruka acts as a "protector" to Makoto. Makoto is usually seen jumping behind Haruka whenever he's scared, and Makoto mentions that Haruka, whenever they're walking by the shore, always walks closer to the ocean since Makoto has a fear of it.

Makoto is seen as having an internal battle with himself, swimming, and his relationship with Haruka. When questioned if he swims just so he can be with Haruka or if he actually enjoys swimming, Makoto realizes that he does not know the answer, which frustrates him. This causes him to distance himself from Haruka, who is upset by this and does not understand why Makoto is suddenly "avoiding" him. This causes them to get into a confrontation with one another.

Makoto ends up explaining why he was so distant and that he did not intend to cause any harm to their relationship. He ends up discovering that he swims because he actually enjoys it and because he wants to be with Haruka--telling Haruka he loves both him and swimming. After this, their relationship is mended and continues on as usual.

In Free! Eternal Summer Makoto tells Haru about his decision to go to the University of Tokyo to study so he can become a swimming teacher. This revelation has a great impact on Haruka who had not found a dream yet and was distraught over the fact that seemingly everyone knew what to do besides him.

Makoto contacts Rin about Haruka's uncertainty, knowing Rin can help Haruka find his path. When he finds out Rin took Haruka to Australia he was surprised but hoped that the trip would be profound to Haruka.

Once arriving in Australia, Haruka acts distant and unlike himself--as seen when Rin takes him to the beach and he doesn't want to swim. Rin can sense something is wrong with him and asks him about it. Haruka reveals he and Makoto had their first fight (this information comes in conflict with High Speed!--Free! Starting Days since Makoto and Haruka are seen fighting there too), which unsettles Haruka. Rin then asks Haruka why he even agreed to come with him, and he says he needed to be away from Iwatobi.

When they return Haru and Makoto meet and reconcile in a consoling way. During the trip, Haru found what he wanted to do with his future, which causes him to also go to Tokyo so he can train in competitive swimming.

Haru takes a break from his swimming when Makoto shows up. Makoto offers him a hand, which Haru takes and pulls him into the water. Makoto says that isn’t nice, but Haru says he was here to swim. Makoto still thinks it’s not nice, and the two begin to swim. Afterward in the locker room, Makoto remarks on Haru’s seeming inability to live without swimming. The two go to the train station before saying goodbye and going off to their universities.

After practice Asahi asks Haru what Makoto’s been up to. Haru tells him that Makoto is in Tokyo, studying at University. As Makoto walks out of class he receives a call from Haru. When he answers and it’s not Haru, he becomes worried. When he finds out that it’s his friends from middle school they meet up at a cafe. While there Makoto tells the others about how he and Haru had to start up their own swim club in high school. Asahi then pulls out a photo album. One of the pictures shows a young Makoto and Haru in the gym playing basketball. Makoto remarks on how young and innocent Haru looks. Haru says that he is still young and innocent.

At the newcomers' tournament, Makoto is excited that it’s Haru’s first time showing off his swimming as a college student. He cheers for him during his race.

Asahi, Makoto and Haru head to Ikuya's University and start to look for Ikuya. They are able to convince one of his teammates to tell him he's at his personal training and head there. They run into Hiyori who tells them to come back later as not to interfere with Ikuya's training.

The three go to the cafeteria, where they discuss what they're going to say to Ikuya. Makoto says that they should apologize first. Haru wants to talk to him about the training camp that they had in middle school and tells them about the conversation he had with Ikuya that night. Makoto remarks on how he never knew that.

The three return to the pool where they are intercepted by Hiyori who tells them that Ikuya left early since he was sick. They get into an argument, Hiyori constantly telling them to go away as they are too weak to be Ikuya's friends. Haru becomes angry and challenges Hiyori to a race. Makoto is shocked by Haru, but Hiyori thinks its a good idea. Although he specializes in backstroke but will swim free against Haru. Before they can officially agree, Makoto says that he’ll swim against Hiyori in backstroke, shocking Haru. Hiyori agrees to race Makoto.

Makoto practices for the race just as Haru arrives at the pool. Makoto gets out and Haru walks over to hand him a towel. Kisumi asks what the whole point of the race, Asahi answers that they understand each other better by swimming together, and Haru confirms this. Kisumi is offended and tells them not to leave him out of the group, Makoto laughs at them. They run into a kid named Misaki who Makoto and Haru had helped with swimming previously since he had a rival he wanted to beat.

Hiyori arrives at the pool and see’s the group, remarking on how early they are. Haru says that they thought he wasn’t coming. They start the race as Haru watches. Even though Hiyori wins, he still doesn't believe that they should see Ikuya. He tells Haru that he's noticed how the people who swim with him tend to suffer, which starts to eat at Haru. As Hiyori walks away, Makoto turns to Haru trying to get his attention, but Haru just stares on ahead, frozen.

A Promise on a Shooting Star!

“Makoto. I appreciate you being here for me. Thanks.”
— Haru.

“I love both swimming and Haru-chan, so I want to swim together with you!”
— Makoto.[1]

“If you're not there... It's meaningless without you!”
— Makoto.

“Seriously guys. If this were a horror movie, you'd be the newlywed couple that gets killed in the first five minutes.”
— Nagisa.

It is considered one of the most popular ships currently in the Free! fandom. In fanfictions, Makoto and Haru are often depicted as practically married and act very lovingly and cute. To strengthen this image, Nagisa and Rei usually make comments such as "I thought they were already dating." 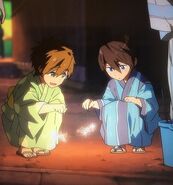 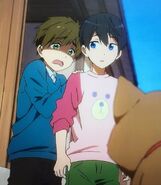 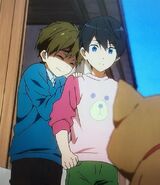 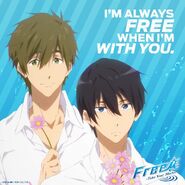 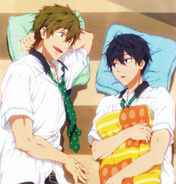 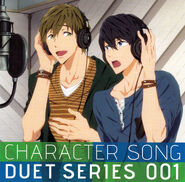 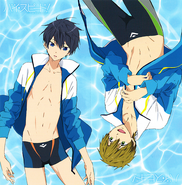 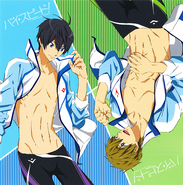 Free! Timeless Medley Haru and Makoto
Add a photo to this gallery

Retrieved from "https://shipping.fandom.com/wiki/MakoHaru?oldid=310506"
Community content is available under CC-BY-SA unless otherwise noted.