Marcaniel is the slash ship between Marc Anciel and Nathaniel Kurtzberg from the Miraculous Ladybug fandom.

Marc often looks at Nathaniel's drawings for inspiration with his writing, on their school's website. Once Marinette read Marc's works she suggests that he and Nathaniel work together on a comic book. Since Nathaniel is looking for a letter to go with his comic strip drawings of him and Ladybug. In fear of Nathaniel's reaction to his story, Marc takes Marinette's advice of showing him the book without telling Nathaniel who wrote it. But because Marc had titled his story as the diary of Ladybug, which has the heroin having a crush on Nathaniel, he assumes that the book Marinette handed him was truly Ladybug's dairy. Once Nathaniel realizes that it wasn't so and began to believe that Marc was playing a cruel joke on him with Marinette, he angrily denies Marc's offer of making a comic book together. Marc becomes so upset that he is akumatized by Hawk Moth into Reverser. After he is de-akumatized and their misunderstanding is cleared up, the two end up making a comic book together.

They are frequently seen together in episodes such as "Frozer" and "Mayura". From the way Marc acts around Nathaniel and talks about him, it can be inferred that he has feelings for him. This was later confirmed by Feri González, who runs the official Miraculous Ladybug Mexico Twitter account.

In recent episodes, throughout season three, they are seen sitting with each other and in "Party Crasher", both kiss Adrien on the cheek. Along with the two continuing to make their comic book together, which was seen in "Gamer 2.0" where Marc reminds Nathaniel of the deadline for their next comic. While the season three finale, Nathaniel and Marc are seen sitting next to each other, among the other couples, in "Miracle Queen".

In the season 4 episode “Hack-San", it is revealed that the most important thing to Marc is the manga that Nathaniel and him are working on.

Soon after "Reverser" aired, the two were shipped by fans. Most looked to how the two worked with each other and hoped for more interactions in season 3. The two have had several on-screen interactions, which further fueled fans to ship them. It was also thought for a while that Nathaniel would obtain the Peacock (or Rooster) Miraculous while Marc would be intrusted with the Goat Miraculous, and that they would join the main superhero team and work together.

The theory of the two receiving their own Miraculouses has fans believing that they'll be given to them when Marc or Nathaniel have been re-akumatized or have been captured by one, and Ladybug asks one of them to help her and Cat Noir save the other by lending either one of the two a Miraculous. Since some of their friends, like Nino and Rose, were given their Miraculouses when Alya got captured by her akumatized sister while Juleka was re-akumatized and gets consumed by her entrusted sentimonster. That is why they believe that Nathaniel or Marc might become part of that pattern.

On AO3, Marcaniel is the most written ship for both Marc and Nathaniel. It is also the sixth most written ship in the Miraculous Ladybug tag. While on fanfiction.net it has 57 fanfics, with only 24 placed under paring in the Miraculous: Tales of Ladybug & Cat Noir category. Marcaniel also has a loyal following on both Tumblr and DeviantArt, where some of its fanart refences them writing and drawing together, sharing a kiss and even has them as their akumatized selves; or their wearing clothes that references their villain forms. 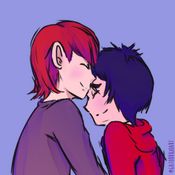 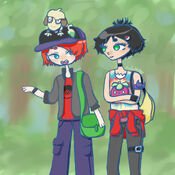