Marcanne is the femslash ship between Marcy Wu and Anne Boonchuy from the Amphibia fandom.

Anne and Marcy are best friends who both attend Saint James Middle School together, and were revealed to have been friends since they were very young in "The Third Temple". At school, Anne looks out for Marcy, who is normally clumsy and does not play close attention to her surroundings. On Anne's birthday, Marcy discovered the Calamity Box in a thrift store and texted Sasha and Anne about it. After Anne was pressured into stealing it, she opened the box alongside Marcy and Sasha causing the three of them to be transported to Amphibia.

Anne and Marcy were separated for some time, as they did not end up in the same area when transported to Amphibia. The pair finally reunited after a few months once Anne arrives in Newtopia in the season two episode titled "Marcy at the Gates". Marcy makes her official debut, saving Anne and the Plantar family from a group of hostile "barbari-ants" and falling into the water in her attempt to zipline down to them. Upon realizing that the cloaked figure was human and recognizing her friend as she spoke, the two have a moment of recognition and Anne tears up and tackles Marcy into a hug. Anne is so excited to see Marcy that even later, when Marcy is dealing with official matters, she pokes her face and plays with her outfit to make sure she was really there. After an instance of this, Marcy tells Anne to "quit it" and the two giggle.

Though Anne is excited to see Marcy, when the group faces the barbari-ants later on in the same episode of Marcy's debut, Anne expresses her concern multiple times, making it clear that she's worried about Marcy engaging in these risky activities, as back at home she was renowned for being rather clumsy and not paying attention to her surroundings. At one point, when a member of the group is eaten by the barbari-ant queen, Marcy expresses that she still save him. Anne insists that she can handle it herself, and Marcy is frustrated that Anne doesn't trust her to take care of it on her own, asking her why she won't let her go. Anne exclaims that she just reunited with her, and that she doesn't "want to lose [her] again." Marcy's expression softens, and she promises that she won't get hurt while grabbing her hands reassuringly. Anne then approves of this and wishes her luck.

After this success, Marcy takes Anne and the Plantar family into Newtopia, and the two spend some time alone to discuss Sasha. They then promise that they will work together to find Sasha and make their way home at long last before Anne shares pictures of her experiences in Amphibia with Marcy, holding hands while doing so.

While working together to solve a puzzle left to them by the King of Newtopia in the episode "Scavenger Hunt," Anne admits to Marcy that she feels dumb around her due to how intelligent Marcy can seem in comparison. However, Marcy tells Anne that she is in reality envious of Anne's ability to make friends so quickly as it is not something that comes naturally to her. She blushes while doing this, and they hug after.

In "The Sleepover to End All Sleepovers," the two travel into the basement together alongside the Plantar kids. There is a point where Marcy is scared by a butterfly and jumps up, leaning her shoulder against Anne, who catches her, and the two make brief eye contact, before all four of the kids start screaming.

When it's time for the Plantar family to return home in "A Day at the Aquarium," Marcy expresses that she wishes for Anne to stay behind with her, as they just got back together and it doesn't make sense for them to split up again. After realizing that Anne wouldn't be happy staying behind with her, she tells Anne to follow her heart. She is clearly distraught by seeing her friend leave, but she understands that she'll see her again shortly.

In the episode "New Wartwood," as Marcy is excitedly telling Anne about what she learned about Wartwood, Anne asks her what else she has learned and blushes while doing so. Later in the episode, Marcy and Anne ride on Joe Sparrow together. Anne can be seen holding onto Marcy's back multiple times.

Later, in the episode entitled "The Second Temple," there is a point where Anne, in pulling Marcy away from a cardinal who tried to eat her, falls on top of Marcy as she falls backwards into the snow. Later in the episode, the two are shown sharing a coat when Anne loses hers.

In the episodes following this, the two continue developing their friendship, though it seems rather mellow.

As of the show's season two finale, "True Colors," it was revealed that Marcy was responsible for the three being transported to Amphibia. Anne feels betrayed by this action. Shortly after she opens the portal and allows Anne and the Plantars through, Marcy is killed by King Andrias, who wields a flaming sword and stabs it through her chest. As she collapses, she tells Anne that she's sorry for everything. Anne cries out Marcy's name, before she is transported back to her world.

A little after the airing of "True Colors," Disney TVA released a sneak peak of the title sequence for the next season. In this sequence, Marcy can be seen in what appears to be a test tube that is guarded by Andrias. Because of this, it can be assumed that she is meant to be brought back to life.

Though Anne and Marcy were on good terms before the events of "True Colors," little is known of Anne's present feelings toward Marcy as of her ''death'' but during A Season 3 sneak peek, Anne refuses to believe that Marcy is dead, and makes it her number one priority to make it back to Amphibia and save her showing that despite what Marcy has done Anne still cares about her.

Marcanne became one of the most popular ships within the Amphibia fandom following Marcy's introduction in season 2. Fans were worried at first that Marcy might be manipulative toward Anne as she had only been seen briefly in season 1 where she watched as Anne stole the Calamity Box. However most came around to her after "Marcy at the Gates" and have found her friendship with Anne to be sweet. The popularity of Marcanna is shown to rival both Sashanne and Sasharcy. As Anne and Marcy knowing each other long before they met Sasha has fans feel the two as the closes to one another in the three girls group, Sashannarcy. Because of the similarities between Amphibia and The Owl House, some like to view Marcy as Anne's Willow from how they have Sasha as Amity.

Sashannarcy refers to the ship between Sasha, Anne, and Marcy 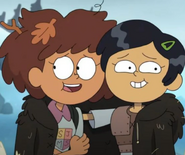