Mareach is the het ship between Mario and Princess Peach from the Super Mario fandom.

As shown with Mario and Luigi: Partners in Time and Yoshi's Island DS, Mario and Peach have known each other since childhood. When thrown tantrums as a child, Baby Mario would help calm her down. Mario and Peach were destined star children kidnapped by Kamek and saved by Yoshi. Back then, they would have play dates and go on adventures together.

As they grew older, Mario would begin to rescue the princess from Bowser and other enemies. For almost every rescue, Peach would reward Mario with a kiss, cake, or both. However, in Super Princess Peach, the roles are reversed in which Peach rescues Mario from Bowser. She also sent Toad to look for Mario in Luigi's Mansion. Peach is also a playable character in Super Mario 3D World who helps Mario save the Sprixie Princesses, with her taking the initiative and having Mario follow her. She is shown to play sports with Mario in multiple spin-offs such as Mario Golf and Mario Tennis, with both having them as team members occasionally.

Numerous games, alternate media and supplemental material depict Mario and Peach as having mutual romantic affection for each other as well as a friendship. In Mario Party 5, Peach and Mario are referred to as "Cutest Couple." Their Mario Party DS team name is "Fan Favorites," referencing their popularity in real life. Mario Party 8, on the other hand, has their team name merely as "Power Players." Adding onto their affection, Mario is shown to occasionally blush madly or be put into a daze when Peach kisses him. Their relationship was also rank at '100%' in art for Mario Party Advance.

In the first Paper Mario, one of the Toads tells Mario to take Peach on a date to Shooting Star Summit, and Rosalina refers to Peach as Mario's "Special One" in Super Mario Galaxy, with the two seen holding hands toward the ending of the game. Mario Power Tennis even goes as far as showing Mario himself telling Peach of his love for her in Peach's victory scene, which she responds to with a smile and a blown kiss. Mario proceeds to swoon. In Mario's victory scene in Mario Power Tennis, Peach gives him a small kiss on his cheek, which brings excitement to the plumber. Early comics such as Super Mario Adventures even have Peach dreaming of a marriage with Mario. The official European Mario website even lists Peach as Mario's girlfriend[citation needed].

With the mention of weddings, Japanese wedding certificates featuring the duo were made to promote Super Mario Odyssey[1]. The papers depict Peach kissing Mario. Furthermore, wedding cards featuring their renders from said game come with the registration papers. German and Korean advertisement also made content of Mario proposing to Peach or imply the duo were marrying within the story. However, Mario and Peach never married in Odyssey. Rather, Mario attempts to stop Bowser from forcing a marriage between himself and Peach.

Despite all of this, in the second episode of Send your Letters to Mario, he states they are only friends. Super Mario Odyssey also has Peach refuse to accept either Mario and Bowser due to their behavior. She does appear to forgive Mario later, though, likely due to less stress put forth on her end. It is implied there are mutual feelings between the pair, but a romantic relationship has not formed as of yet.

Princess Peach may also occasionally be portrayed as Mario's assistant for the Dr. Mario series. While not appearing in-game, promotional art will have her adorn a pink nurse's uniform. She will also occasionally be seen handing out pills or interacting with Mario. With the recent title of Dr Mario World, Peach is now a fellow doctor working alongside Mario.

Both characters are playable in Super Smash Bros. In several character descriptions for their trophies, they make reference to Mario rescuing Peach and their implied romance. Princess Peach's end card in Super Smash Bros. Ultimate goes further, with both Mario and Peach in their white alts being wedded by Robin. Princess Daisy's also depicts them posing together alongside Daisy herself. In Bowser's, he is shown kidnapping Mario, with Peach calling out for him. The duo also fight together representing the following Spirits: Peach (Wedding), Pauline, Geno, Wanda, MC Ballyhoo & Big Top, Mario (Mario Tennis Aces), and Dice Block.

Super Smash Bros. for Nintendo 3DS and Wii U

“Oh Mario! You came to the party to see me! You're so sweet! Thank you!♥”
— Princess Peach, Paper Mario

“Mario! The power of the Stars is restored to the castle...and it's all thanks to you! Thank you, Mario! We have to do something special for you... ”
— Princess Peach, Super Mario 64

“You wouldn’t leave me here all alone, would you, Mario? Let me catch up to you before you get to the bank!”
— Princess Peach, Fortune Street

“Looks like I need to start picking some flowers for your victory bouquet, Princess Peach!”
— Mario, Fortune Street

“Wow, an invitation from Peach! I'll head out right away. I hope she can wait for me!”
— Mario, Super Mario 64 Manual

“Oh, yes, she'll still gives me a little little smoochy like on the nose. [...] She say, 'Oh, Mario, even when you're little, you're very cute!”
— Mario, Nintendo World New York

Mareach is one of the most popular ships in the Super Mario series, Super Smash Bros., and video games in general. The ship is so recognized that real life weddings have used the two characters as wedding toppers. The default outfits of the pair are also a fairly common couples outfit for Halloween and conventions. As of now, on AO3, there are around 164 fan fics for the pairing.

Their relationship in fandom is typically portrayed in a lighthearted manner. However, fans may sometimes aim more towards a grimdark tone with the relationship. In these instances, the pair may be drawn more realistically or add adult subjects to the ship despite no canon evidence pointing towards such content. Game theorists may also go further and state that Peach is cheating on Mario or the other way around despite their relationship only implying romantic feelings in-canon.

Fanart will usually portray Peach kissing Mario on the nose or head in reference to her reward for Mario being as such. The duo may also bake cakes together as well. After the first trailer of Odyssey was released, art of the pair getting hitched had dramatically increased due to Princess Peach and Mario's wedding designs. Outfit swaps in which Princess Peach wears Mario's overalls or the reverse are also commonplace.

When the fan blog SupperMarioBroth posted information on Mario Picross, fans enjoyed Princess Peach's plumber design from the game's comic. They proceeded to make fanart of her and Mario co-working together. However, art depicting Mario as a prince instead also increased as well. The concept of roleswapping with the duo, while not new, has dramatically grown.

Fanfiction will usually have Mario proposing to Peach. If the author wishes to add drama, either Peach or Mario will be kidnapped, with the latter saving them. While rare, some stories may have Mario and Peach raising children together as a nuclear family. Whether Peach stays as a royal or not depends on the circumstances. Nonetheless, their fan-children typically will have Peach's blonde hair and Mario's nose in most stories and art.

The Super Smash Bros fandom, when including Dr. Mario, contains seventy fics. Super Mario, on the other hand, has at least eight hundred stories. AO3 has one hundred and seventy-seven of the pair. Multiple DeviantArt groups, such as 'Mario-x-Peach-Fans' and 'TheMarioXPeachClub' pay tribute to the pairing. 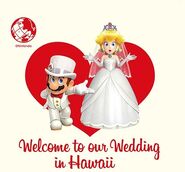 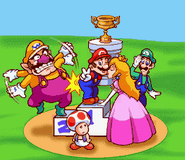 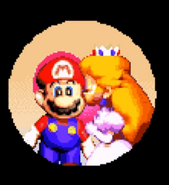 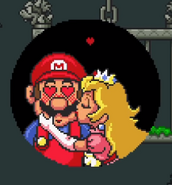 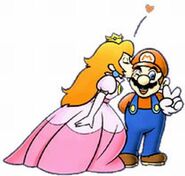 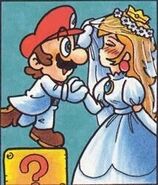 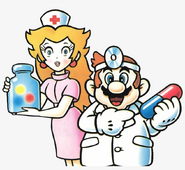 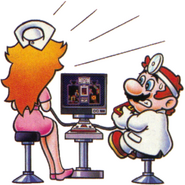 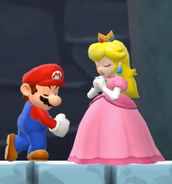 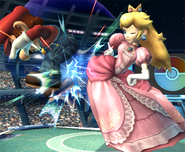 Bowsareach ― the ship between Bowser, Mario, and Peach