View source
watch 01:25
Jurassic World: Dominion Dominates Fandom Wikis - The Loop
Do you like this video?
Play Sound
This article is about the ship between the four main characters in the series. You may be looking for the ship that includes Chloé Bourgeois in their group of friends.

Mariadrienalyanino is the friend ship between Adrien Agreste, Marinette Dupain-Cheng, Alya Césaire and Nino Lahiffe from the Miraculous Ladybug fandom.

Adrien, Marinette, Alya and Nino are friends and classmates at Françoise Dupont High School, as it is where the four of them met and became friends. Along with the school allowing them to go group activities with the rest of their friends and classmates. Back when Nino had a crush on Marinette, while she has one on Adrien and Alya does what she can to help Marinette get together with them, Alya had only saw Nino as a brother-like figure. Until a failed date at the zoo, where Alya and Adrien tried to help Marinette and Nino leads to Ladybug locking Alya and Nino in a cage for their own protection, while she and Cat Noir dealt with the Akumatized villain. During their time in the cage, Alya and Nino realize that they like each other and began to date one another. The two becoming boyfriend and girlfriend also had Alya trust Nino with the fact that Marinette is in love with his best friend and agreed to keep it a secret.

On two separate occasions, when members of Alya's family were akumatized and both Ladybug and Cat Noir alone were enough to stop them, she lends Alya and Nino the Fox and Turtle Miraculouses. So Rena Rouge and Carapace can lend her and Cat Noir a hand whenever they are in need of their help, before they return the Miraculouses back to her once the battle is over. Because of superhero code that involves both sides of their identities, Marinette could never tell either of them that she is Ladybug, just as she keeps reminding Cat Noir why the two of them can never know one another's identities or that Alya and Nino are Rena Rouge and Carapace, even though it hasn't stopped Adrien from wondering who Ladybug is behind the mask. Alya and Nino on the other hand were lucky enough to be entrusted with each other's hero identities, when Ladybug gives the two back their entrusted Miraculouses at the same time.

In "Horrificator" Nino enters a film making contact that Marinette, Adrien, Alya and the rest of their classmates help him with. With Adrien as one of the actors, Marinette as the producer and Alya writing the film's scrip, while Nino serves as both the director and camera man. Midway through filming, Alya learns that Nino had made a change to her scrip without telling her about it, while the absence of both Mylène Haprèle and Chloé Bourgeois has Alya surjecting that Marinette can fill in for them so she could finally have the chance to kiss Adrien, through the scene that Nino added in. Once they all learn that their school is being attacked by a monster-themed villain, both Adrien and Marinette fake their kidnappings so they can transform into into Cat Noir and Ladybug without the worry of their friends uncovering secret identities. When Ladybug and Cat Noir make themselves known to their terrified, Nino was frilled with the fact that he can add Paris's guardian heroes in his film, as he kept his phone on record throughout the episode. Once they came across Horrificator's lair Ladybug is able to come up with an idea to shrink Horrificator through Mylène's song, as she enlists, Cat Noir, Alya, Nino and the others to sing it with her. Even though Nino was able to finish his film that his friends and heroes helped him with, the Mayor wasn't happy with the monster in it and decides to reject their hard from the contest. To cheer his friend up, Adrien reassures Nino that many directors have been in Nino's shoes and how one or two rejections haven't stopped them. While on Alya and Marinette's end, Alya mentions the film's kiss scene and how it wasn't the one they expected, and even though Marinette wasn't able to have her first kiss with Adrien this time she knew that they'll be other opportunities to have it some day.

In "Anansi", the four made plans to watch the fireworks on the Ferris wheel, but the late hour has Gabriel not allowing Adrien to join them. So Marinette calls him through video call so he could still join them in a way. Before they left to see the fireworks, Marinette and Adrien watch Alya and Nino dance in sync to a dancing game at Alya's apartment, as the two were amazed at how well their friends were able to work together while having fun. When Nora Césaire came home from her wrestling match she wouldn't allow Alya to leave the apartment, due to the akumatized villains who had targeted her sister in the past and doesn't believe that either Ladybug or Cat Noir can protect her. Hearing Nora say those things upset Alya, Marinette and Adrien, while Nino states that he'll protect Alya. To make sure that Alya is allowed to go out with them, Marinette helps Nino to beat Nora in a arm wrestling match, while Alya and Adrien watch it happen. As the four watch the fireworks together, Adrien is glad that the phone allows him to see it with them like he is there in person, but when Marinette, Nino and Alya get attacked by an Akumatized Nora, Adrien ends the call before he transforms into Cat Noir. So he can save his friends from Anansi, but by the time he got there Anansi set events that would keep Cat Noir out of her way as she captures Alya and takes her. While Ladybug helps Cat Noir save the people that are still on the runaway Ferris wheel, before they go to save Alya together, Nino had been dashing after Alya and Anansi until they got to an archway. Where Anansi creates a giant web to trap Alya in, and as Cat Noir tries to Alya off of it he too gets stuck on it. As Nino tries to fight Anansi he gets saved by Ladybug and when Lucky Charm tells her to go and see Master Fu, she asks Nino to face Anansi again until she returns. Since the only way she can save Alya and Cat Noir now is to temporally turn Nino with Miraculous, like she had done with Alya before him. With the power of the Turtle Miraculous Nino transforms into Carapace, as he uses his new power of protection to save his friends. Because Cat Noir has no idea that the new turtle-themed superhero is his best friend he began to worry that his lady has replaced him, until Ladybug reassures him that wasn't the case and how he isn't replaceable. Before the heroes dash off to de-transform, Ladybug and Carapace make time for Alya to create a short video of them for her blog. After Nino gives the Miraculous back like he promised and she gave it back to Master Fu, both Nino and Marinette catch up with Alya and her sister. As for Adrien, he returned home for the rest of the afternoon.

Thanks to their water powerup transformations, both Marinette and Adrien were able to escape Miracle Queen's mind control wasps, while Alya and Nino weren't so lucky and due to both of them being temporally Miraculous holders, Miracle Queen has them reveal their civilian identities to Hawk Moth before she hands a mind controlled Alya the Fox Miraculous. As for the Turtle Miraculous, it was currently being used by Jade Turtle and that prevented a mind controlled Nino from transforming into Carapace, or joining Rena Rouge among the rest of their mind controlled allies. In order to save Nino and Alya from Miracle Queen's hold, Ladybug and Cat Noir were forced to fight Rena Rouge, while Nino sat on the side-line, in order to reach and de-akumatize Miracle Queen back into Chloé Bourgeois. Even though the two main heroes were able to save Alya, Nino and the rest of their temporally Miraculous holder allies and got them all back to the safety of their friends and families, it doesn't change the fact that both Hawk Moth and Mayura now know their friends' secret identities and how it now places Alya and Nino in future danger from their main enemies.

Before and after both Nino and Alya were given their own Miraculouses in season two, fans had the common idea of them being entrusted with Marinette and Adrien's secret once they were given a Miraculous each. Along with Alya and Nino being allowed to keep their Miraculouses. In most group fanart within the Miraculous Ladybug fandom it commonly features the four together, where some of them make references to Adrienette and DjWifi, since fans commonly ship those two ML ships beside one another, along with season two inspiring fans to have their fan-made work showcase the four's superhero forms and animal themes that their Miraculouses give them. Since fans see the Miraculouses linking the four together, in both sides of their double lives as students and heroes.

Some people also ship this as a poly ship since they can't choose between all of the ships between these four characters. Or maybe they prefer the dynamic between the four as romantic instead of platonic. 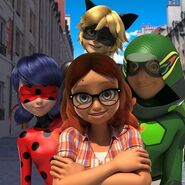