Marthalina is the het ship between Rosalina and Marth from the Super Smash Bros. fandom.

In the game’s universe, they never got to meet up, however, during the World of Light, both of them come together with the base roster to fight against Galeem. As they are both from different series and universes, they unfortunately cannot meet each other.

Both Rosalina and Marth are reserved, yet kind and caring to others, that leads to them being open minded. They have also suffered their own kind of personal loss. Their singer blue colors are connected to their royal titles and standers, even though they are of different reasons. Marth was born into becoming a king, while Rosalina was chosen by the Lumas to become a goddess and the figure of the Lumas. Just as Marth was entrusted with the Fire Emblem from the Princess of Archanea. Their singer shades of blue are also mixed with yellow and red-like shades of color, as well as their eye color being of a light blue shade. The two are also capable of doing magic, even though magic isn't Marth's main skill while Rosalina is marvel at it; with some help from her star headed wand. While Marth relies on his sword.

Just as Marth wears the Fire Emblem in his clock-cape, Rosalina has a silver star with a yellow around jewel or circle on the caller of her blue dress. Since the Lumas are yellow star shaded creatures. Even though the Smash Bros. series commonly has a around red jewel take the place of the Fire Emblem on Marth's cape-cloack, which look similar to the small red round jewel's Rosalina's silver tiara.

There is a small community this of Marthalina shippers, who love this pairing. While they never met in canon through the Smash Bros. series, a few fans and supporters of the ship do have them meeting in fanon. Through the SSB series or the crossover fanon universes of their Nintendo game series', Fire Emblem and Super Mario.

While at times being cheerful and upbeat, Rosalina is considered more mature of the pairing, while Marth is more aloof towards personal relationships and is admirable, which leads to attention from women, despite his marriage to Caeda. In written fanfiction, the pairing would be a background pairing to other pairings. When they are the central pairing, they both have mature conversations, mainly talk about what they have in common and their life stories. As they are both are awkward in doing relationships, they would sometimes have to find ways to approach one another. Marth or Rosalina would want to gift them with something that they like. In their relationship, the Lumas are considered as their children, as Rosalina took care of them, and Marth would saw as adorable that he wants to protect them.

On AO3, the ship only has 2 fanfics, while Fanfition.net has 3 in its Super Smash Bros. category. 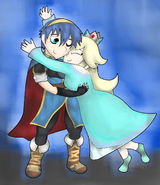 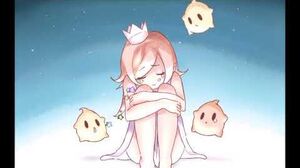