Martial Arcs is the slash ship between Jaune Arc and Lie Ren from the RWBY fandom.

Jaune and Ren first met each other during the initiation process in the Emerald forest. Jaune, Ren, Nora, Pyrrha and everyone from team rwby all eventually found each other and teamed up. During the fight with a giant nevermore Jaune teamed with Pyrrha, Ren and Nora and gave them directions as to what to do. They were then put on a team together with Nora and Pyrrha and the two eventually became friends. They then fought together alongside Pyrrha and Nora during the foodfight with team rwby.

In volume 2 chapter 6, Ren exits a shower clad in only a towel, when suddenly Jaune appears and yanks him away before claiming that they need to talk. They are then shown speaking in the jnpr dorm room. Jaune tells Ren that he considers him one of his best friends and "the brother he never had", Ren awkwardly sitting on the bed next to him says "And I you". Jaune then confesses to him about his trouble with girls, and asks for advice in getting Weiss to return his affections. Pyrrha then enters the room and tells Jaune to simply be honest with Weiss. Jaune, buoyed by this advice, thanks Ren and Pyrrha and rushes off to ask Weiss to the dance. In volume 2 chapter 12 Team jnpr is about to leave for a mission when suddenly they hear sirens, Jaune then decides to change the mission and head towards vale. Before they can leave however Jaune pulls Ren to the side and tells him that we'll make it to that village another time, to which Ren nods his head in agreement.

In volume 3 they participated in the vytal festival tournament together along with Pyrrha and Nora. After the fall of Beacon, Jaune, Ren, Nora and Ruby all teamed up together to head off together to Mistral. During their travels at one point the team had to split up but before they could Jaune and Ren had an emotional hug before Ren and Nora took off in the opposite direction. Ruby told a worried Jaune that they were going to be fine to which Jaune replied "You don't know that". The two teams eventually regrouped and worked together to destroy the Nuckelavee. In volume 5 after Weiss was fatally stabbed by Cinder, Jaune and Ren ran over to her side and didn't leave til she was completely healed.

During volume 7 Jaune and Ren worked with Vine to help evacuate citizens from Mantle. Team jnpr are then seen trying and failing to get the relic of knowledge back from Neo. Ren then angrily lashes out at Nora to which Jaune snaps and says "Ren that's enough". In volume 8 Ren, Jaune, Yang and Oscar all teamed up to help evacuate the remaining citizens of Mantle. During this Jaune used his semblance to amplify Ren's semblance to mask the emotions of all citizens. While thy're moving Jaune asked Ren if he was alright, to which Ren responded it's just alot to focus on. Jaune then tried to encourage Ren but he sharply replied "I don't need a pep talk, I need to focus". Shortly afterwards Oscar is then kidnapped by the hound grimm and the three chase after it. Ren then catapults off of jaune's sheild to latch himself onto the hound. As Yang and Jaune chase after them, they end up being thrown off their hoverbike and just as they are about to fall to their deaths off a cliff, Ren shows up at the last second to save them. He also uses his semblance on all three of them when another grimm shows up and almost attacks them.

Afterwards the three of them are then seen walking through a soon to be blizzard with Jaune hauling Yang's damaged bike in tow. Yang and Ren then get into an argument and Jaune tries to mediate between them and break up the fight, but then Ren turns on Jaune and yells out "And you cheated your way into Beacon!". Jaune gives Ren an unimpressed look then says "You don't wanna be huntsmen? Fine, but I'm getting out of the cold. We still have a job to do".

After they find a warm place to rest Jaune admits to Ren that he was right, he did cheat but he had people around him to show him that he was bigger than that mistake. Also the more he kept pushing people away the more alone he was going to feel. Ren then leaves the house to sit outside in the cold.

Martial Arcs is a rarepair in the RWBY fandom, though it did briefly grow in popularity after their hug in volume 4. People who don't ship this pairing, however, might prefer to ship ReNora, Dragonslayer, White Knight, Lancaster, Arkos, Sunflowyr, Nora's Arc and Knightfall. 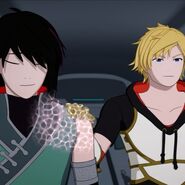 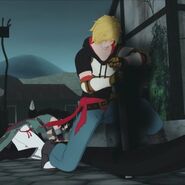 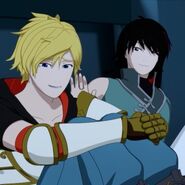 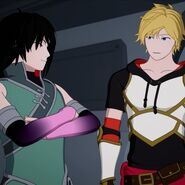 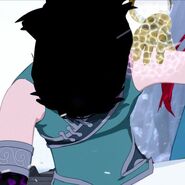