Maxinette is the het ship between Marinette Dupain-Cheng and Max Kanté from the Miraculous Ladybug fandom.

Marinette and Max are students at Françoise Dupont High School, where they have been in the same class since the previous school year. They have very little interaction with each other outside of school, but there are times when both of them take part in some of the group activities, as well as a few kinds of group get togethers with the rest of their classmates. Like most Parisians, Max has respect for Ladybug and sees her as a wonderful protector of Pairs, all without knowing that she is secretly his kind, clumsy classmate.

In "Gamer", Max had gotten upset with Marinette when she beats him at Ultimate Mecha Strike III in which has her taking his place in the torment. He tries to hide it but his built up frustration had gotten him akumatized into the titled villain, and after Ladybug and Cat Noir were able to de-akumatize him, Marinette, who felt bad for what she earlier did to him and had wanted to set things right between them, tells Max that he should have her place in the torment. In which has Max gaining a lot more respect for her, and he encourages her to be his partner after Adrien drops out for both of them.

In "Startrain", Marinette meets Max's Mom for the first time as Mrs. Kanté shows them and Alya the train she runs, since it is her train that is taking them and the rest of their class to London for a field trip, and the two girls accompany Max and his mother to her work so they can see it before everyone else arrives. Mrs. Kanté also shares her dream of becoming an astronaut with the girls. Marinette think that the bond Max has with his mother and supporting Mrs. Kanté in her dream is very sweet, since Mrs. Kanté had put her dream on hold for Max so she can look after him until it was time for her to pursue it again. During the long train ride, Max sits behind Marinette. When Mrs. Kanté got akumatized into the title villain, Marinette ask Max if he can talk sense into his mother as she and the rest of their classmates follow him, and but when that didn't work Marinette forms a plan that could have them get the jump on Startrain; but the train's cameras allowed Startrain to catch onto them before they could execute it. Shortly after Marinette transforms into Ladybug, Max gets his robotic friend, Markov, to open the doors for her and Cat Noir, and because he knows the train better than they do the two superheroes invite Max to help them reach Startrain. As Startrain tries to keep them away by sending out a strong bust of hot air from the train's air vents, Ladybug uses her Yo-Yo to tie Max's weight to her back, so she could get him to the door, and as Markov's secets were over heating Ladybug encourages Max to come up with away to cool them.

Before Marinette had met up with Max, Alya and his Mum earlier that day, she had told Master Fu of their fieldtrip and her worries of Hawk Moth attacking had kept her from wanting to go so he gave her the Horse Miraculous, since it has the power of teleportation. After Startrain started to create a void by turning on the cold to freeze certain parts of the train, Cat Noir tells Ladybug that Max would have trouble surviving without superpowers of his own, so Ladybug decides to entrust Max with the sunglasses form Miraculous to give him protection. Max agrees to take temporally ownership of the Horse Miraculous so he can help the main duo save his friends and his mother, and before he transforms for the first Ladybug explains her plan and the role he plays in it. Now as the new horse-theme superhero, Pegasus, the three superheroes, along with Markov descend into the icy compartment, and like Ladybug Pegasus sees a flash of a printed pattern, of horseshoes instead of spots, as they tell him what his next move should be. Even though Pegasus got the coordinates a bit off when he used his superpower, Voyage, for the first time as he got the back to Earth train ended up on top of the roof of Big Ben in London England, the main duo couldn't have stopped Startrain without him and Ladybug thanks Max for his help after he gives the Horse Miraculous back to her.

Pegasus's help was called upon again in "Party Crasher", after Ladybug was captured by the title villain and went to help Cat Noir, Carapace and Viperion defeat the akumatized villain so they can save her. Even though they all got captured with her, the help of their new Miraculous holder ally, King Monkey, was able to free them with the superhero of Uproar and after Ladybug asks Pegasus to pick up an old radio so she can use her Lucky Charm, the six heroes successfully defeated Party Crasher together as a team. Marinette and Max later help their friends to clear up Adrien's room, before they all go to help the girls plant trees.

While the two have little interaction with each other outside of school, aside from doing a few fun activities with the rest of their fellow classmates in the series, it hasn't stop fans from shipping them together.

Since Timetagger reveals that during the time of their adulthood, Ladybug and Cat Noir have assembled a team of Miraculous holders, that might have Max as one of its members.

Max's Relationship with Marinette on the Miraculous Ladybug Wiki 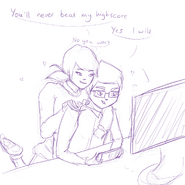