McAshe is the het ship between McCree and Ashe from the Overwatch fandom.

McCree and Ashe met sometime in their adolescence, committing a short crime spree throughout the American southwest before deciding to join up together, along with two others, and creating the Deadlock gang. The two quickly made names for themselves and the gang, McCree as an expert marksman and Ashe as a cunning leader. Years later, the gang was busted during an Overwatch sting operation, and McCree was recruited into Blackwatch in lieu of serving prison time. Ashe, possibly unaware of McCree's options, took this as an offense and has held a grudge ever since.

McCree tracks down a train to Route 66, where it is blown up by the Deadlock gang so they can rob it. He exits a diner and a member alerts Ashe that Jesse is there. Ashe observes that it's been awhile, McCree responds that he's been busy. Ashe knows it's no coincidence that McCree is there, and tells him to move along so they can take their score. McCree says that he only wants one specific crate, and she can have the rest. Ashe orders B.O.B. to open the crate, and seeing what's inside, she's interested. Ashe asks McCree what it is, but he refuses to answer and just says that it's none of her business. Ashe is displeased by his answer and orders the others to surround her former friend, getting ready for a shoot-off.

They all hold still, till the clock reaches noon. McCree shoots at Ashe, who uses one of the triplets to block the shot, but while she blocked McCree threw a flash grenade at her. He fights off the other members as Ashe recovers. She starts to shoot at him, but he's able to get off a few shots, that are blocked by B.O.B. She orders B.O.B. to shoot at him, but McCree hides behind some debris just in time. She yells at McCree that it's his last chance, just as she shoots at him, and orders him to toss out his gun. McCree throws an entire belt of hand grenades into the air, shooting each one and exploding them. This knocks out Ashe and the rest of her gang.

Ashe wakes up tied to the payload. She see's McCree and orders McCree to untie her, but he ignores her and tells her to say hi to everyone for him then starting the payload. As the payload leaves she threatens that she's going to have B.O.B. rip off his other arm.

McCree is able to get Echo out of the crate so that she can rejoin Overwatch, but he has to finish some business before he can join them. He hops on Ashe's bike, where she had taped a picture of the two of them playing poker when they were younger. He rides off.

“There's only one way you get to leave the gang.”
— Ashe killing McCree; Final Blow

“It didn't have to be this way.”
— McCree killing Ashe; Final Blow

“Makes us about even.”
— McCree killing Ashe; Melee

McCree – “Ashe, how about we let bygones be bygones?”
Ashe – “Aw, you know that's not the way it works, Jesse.”
McCree – “I was hoping you'd make an exception, for old times' sake.”
— Old Times

McCree – “You always were the ambitious one, Ashe.”
Ashe – “You make that sound like a bad thing. You'd still be on a farm if it weren't for me.”
McCree – “Some days, that doesn't sound so bad.”
— Origins

Ashe – “Brave of you to show your face around here, Jesse.”
McCree – “Well, I know how much you missed me. Still have a picture of me at the hide-out, I hear.”
Ashe – “On the dartboard.”
McCree – “Bet you look at it every day. Flattering, really.”
— Dartboard

Michael Chu confirmed on twitter that they had never dated[2].

Fans speculated after "Reunited" that Ashe and McCree has previously been in a relationship. When it was confirmed that they were not, fans were still taken with the pairing and art and fics were made. 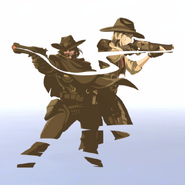