MeiLissa is the femslash ship between Mei Hatsume and Melissa Shield from the My Hero Academia fandom.

The girls don't have any canon interactions in the anime, as they’re not only from different academies, but different countries. Nevertheless, they get to meet in Chapter 3 of the light novel spin-off, Team Up Missions.

While Izuku and All Might were heading to the Support Department, they meet again with Melissa, she then says that was chosen to do some support item searcher in the Support Department, and that she had already met up with Mei Izuku asked the girls for help with maintenance for his hero costume, and both agreed to help. Knowing that the two are particularly smart, and skilled with things of the sort, Izuku comments to All Might that the repairs would turn out amazing with the girl’s combined work. All Might easily agrees. However, Melissa and Mei have different views on what to do with the costume; Mei wants to add her support items (babies), while Melissa wants to lessen it, and make it lighter. They decide to compete on who’s repairs could do better, setting Izuku as the judge. It’s his costume, after all!

Days later, the competition is ready to be held in the USJ. They invited the trio of Denki Kaminari, Katsuki Bakugou, and Eijiro Kirishima to spectate as they made Izuku try out each of their inventions with the help of the USJ’s functions. Izuku, being human, needs to rest after a while of this, to which the girls agree on. Things go awry soon after this rest, however. Apparently they’d taken advantage of the USJ's disasters far too heavily, causing them to all come at once, turning the place into a real disaster room, according to Melissa. After Eijiro saves him, Izuku points out to Mei that some of her ‘babies’ could still be salvaged. A worried Melissa warns her that it was far too dangerous to even try to get them, but Mei doesn’t listen. She almost ends up being crushed by fallen rubble, but Melissa saves her in the nick of time with the use of a support item she was carrying, and drags Mei to safety. After this, they compare and compliment one another’s creations, shaking hands to confirm their reconciliation. Mei says that they could be good partners one day. To finish the chapter off, they can be seen chatting and praising one another, before deciding to resume their tests in playful competition.

While remaining a rarepair on the fandom, it became better-known after both girls oficially met in the MHA Team Up Mission, which people enjoyed their interactions and so their pretty similar and almost equal likings: both liking doing support items or "babies". 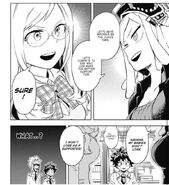 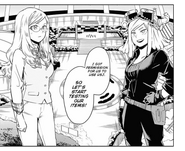 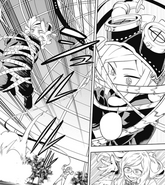 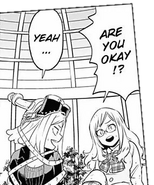 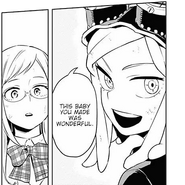 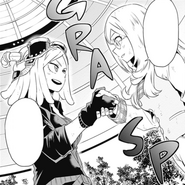