Meihem is the het ship between Junkrat and Mei from the Overwatch fandom.

Mei is a climatologist, who was sent to ecopoint Antarctica for Overwatch. A polar storm hit and her team started to run out of supplies. In an effort to save themselves they put themselves into a cryogenic state till someone could rescue them. Years later Mei's pod opened up, being the only survivor. The world had changed drastically while she was asleep, including the fall of Overwatch. The climate had also worsened. Mei works on her own now, trying to re-establish other ecopoints, and find the causes of the danger to the planet.

When Australia was turned into a wasteland after the omnic wars, the people left alive became "Junkers". They scavenge the land and force a cutthroat society. Junkrat was one of the junkers and worked reclaiming materials from the ruins. The lingering radiation caused him to go mad, making him ideal for handling explosives which he became obsessed with. He found a valuable treasure in the ruins, causing him to come to fame and be pursued by bounty hunters and thieves. He hired a body guard, Roadhog, in exchange for half the share from the spoils. The two left the outback and embarked on an international crime spree.

In game they share a few voice line interaction, but in the established Overwatch lore, they haven't been shown interacting. While both characters are opposites, their are many interactions in the game that suggest they may have some things in common. The Lunar New Year event revealed that Junkrat taught himself Mandarin Chinese, Mei's native language, and is able to utter the New Year's greeting "Gõng xǐ fā cái!". Mei and Junkrat are currently the only characters in the games who have the phrase as an unlockable line. Both also enjoy boba tea.

Junkrat – “Brrr. I get cold just looking at ya.”
Mei – “Then you should look somewhere else.”
— Cold

Mei – “You're just a no-good bully. How can you even look at yourself in the mirror?”
Junkrat – “That's cold.”
— Bully

Mei – “I hate fools like you.”
Junkrat – “I beg your pardon, I consider myself a freedom fighter. A misunderstood one.”
— Fools

Meihem is a moderately popular ship in the Overwatch fandom.

Much of the appeal for the Meihem ship comes from the character's seemingly clashing personalities, which is highlighted by the character's opposing motifs- Junkrat representing fire and destruction, while Mei represents ice and preservation. However, fans of the ship often take notice of the many ways these two characters are alike, and believe there is potential for a slow burn, enemies-to-lovers, or opposites attract type of romance. They often characterize the couple as starting off on the wrong foot, with either one (usually Mei) or both characters being contemptuous or apathetic toward each other, only to eventually bond over their shared interests and characteristics. Fans of the ship also speculate that a romance between the two would also result in a redemption arc for Junkrat and character development for Mei.

The two have opposing personalities in canon. Junkrat is extremely chaotic, unfocused, and crude, raised on the fridge of society while only looks out for himself. Meanwhile, Mei is more calm, disciplined, and polite, wanting to figure out ways to help the Earth. However, the two also share a surprising number of similarities- both are very upbeat despite their lot in life, have a giddy sense of humor, are easily excitable, highly intelligent and skilled with machinery. They also share a number of interests, including a fondness for travelling and boba tea.

Lead writer of Overwatch, Micheal Chu, has displayed interest in the ship, and mentions it frequently on Twitter and in interveiws when discussing ships. While he usually does so playfully, many take it as hints of an intention to explore their relationship in the future. 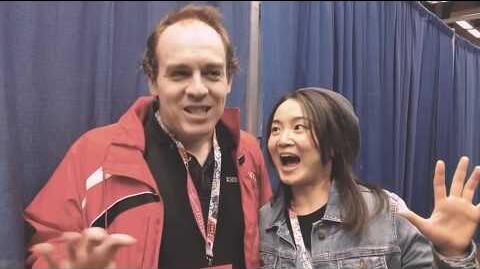 Meiham refers to the ship between Mei, Junkrat, and Roadhog.