Shipping Wiki
Register
Don't have an account?
Sign In
Advertisement
in: Ships, Ships/Slash, Sonic the Hedgehog (Fandom)/Ships,
and 5 more

Mephadow is the slash ship between Mephiles and Shadow from the Sonic the Hedgehog fandom.

In Shadow's Story of Sonic the Hedgehog, Shadow and Rouge head to the ruined castle of Soleanna with the Scepter of Darkness in hand. Dr. Eggman arrives, and asks Rouge to hand back over the scepter. As Shadow and Rouge deal with the doctor’s robots, the latter drops the scepter. The reaction from the scepter shorts Eggman’s robots. As Shadow gets close to the scepter, a dark spirit comes out of it and takes down the stunned robots one by one, forcing Eggman to leave the ruins. The spirit then appears close to Shadow and Rouge and takes the form of the former, though paler than the hedgehog. The being thanks Shadow for resurrecting him and takes a bow. The hedgehog asks for his identity and why does the being know his name, in which he introduces him as Mephiles the Dark. Appalled, Shadow walks back as the being gets close to him. Mephiles says that the hedgehog owes him something, and as to return the favor, teleports him and Rouge to a seemingly unknown location and at an unknown time.

Back at the computer, they have realized that Mephiles teleported them both 200 years to the future. They deduce that he can control time and has the powers similar to Shadow’s.

Sonic and Shadow use two Chaos Emeralds to open a to return to the present. Sonic, Tails, and Knuckles go through, and as Rouge is about to enter, she turns her face back at a shadow and flame. Shadow decides to stay to investegiate the shadow that immediately manifests into Mephiles. The portal closes, and Rouge realizes that Shadow did not follow her. Mephiles praises Shadow for not taking his only return ticket home. Shadow asks if the dark ruined "this world", in which Mephiles says most of the work is done by Iblis. Mephiles asks Shadow to join him in punishing humanity, but the hedgehog refuses—saying that he "determines [his] own destiny". Mephiles transforms into his crystalline form. After a short fight, it seems that the Mephiles had the upper hand. Omega assists Shadow, then Mephiles opens a time portal to the present, with both following him.

Later, Shadow and Silver travel to the past. After the experiment goes wrong, Shadow goes after the black shadow while Silver Iblis. Using Chaos Control, Shadow traps the dark pool into the Scepter of Darkness, not after the dark being asks for his name, in which he curses the hedgehog to death. Contratry to Eggman’s request, the hedgehog placed the scepter beside a sleeping Elise.

Shadow, Rouge, and Omega then head to a desert temple. They confront Mephiles, while the crystalline being renewing the offer of Shadow joining him. The hedgehog refuses again, mentioning a crave for destruction. Shadow tries to seal him again with the scepter, but Mephiles destroys it, fully merged with Shadow’s powers. He then pushes all three back with a strong force. The being uses his and Shadow’s Chaos Emeralds to make clones of himself, then declares himself invincible to Shadow’s limited power. The hedgehog removes his inhibitor rings and all three escape the encounter.

After Mephiles kills Sonic and merges with Iblis in the final story, Shadow was one of main characters who searches for Chaos Emeralds in order to revive the blue hedgehog. Together with Sonic and Silver, all in their super forms, they defeat Solaris, reducing the godlike being into a simple flame. With Elise blowing out the Flames of Disaster, erasing almost all the events of the game, Mephiles ceased to exist.

In Sonic Rivals 2, Shadow is a playable character, while Mephiles appears as a collectible card; though two cards feature the black hedgehog. Both Shadow and Mephiles also appear in the now-discontinued Sonic Runners mobile game.

While Mephiles himself does not physically appear in the Archie comics, there is a section of The Complete Sonic Comic Encyclopedia where it reads that the spirit-being was formed out of Solaris after a failed experiment, only for Shadow to trap him into the Scepter of Darkness, initiating the events of Sonic the Hedgehog.

Mephadow is a popular shipping pair. Fans tend to pair Mephiles typically in his Shadow form, where he almost resembles the black hedgehog. A few others would also add the impostor hedgehog a mouth, despite not having one in both his crystalline and Shadow forms. This can be shipped alongside Sonilver.

A DeviantArt fanclub was set up on mid-2010, with plenty of fan art and fictions on its gallery. On Archive of Our Own, this pairing as of July 2021 is the second-most popular, at sixteen fan-made works, right behind Mephilver. Wattpad has seventeen works for this pairing. 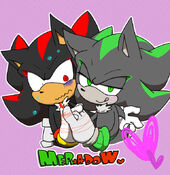 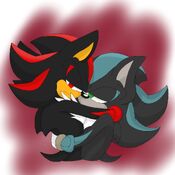