Mephilver is the slash ship between Mephiles and Silver from the Sonic the Hedgehog fandom.

Silver and Mephiles first met in both of their debut, Sonic the Hedgehog. After he and Blaze defeated Iblis yet again, Silver was angry that the monster could never be truly defeated. Suddenly, Mephiles appeared behind Silver and Blaze and claimed to have a solution to the problem. Mephiles told Silver that he could time travel, and that the timeline would be fixed if Silver went back in time and killed the Iblis Trigger. Silver agreed to do so and the three were sent back in time, but in different locations.

Silver and Mephiles crossed paths again after two failed attempts to kill Sonic. Mephiles told Silver that Sonic was at the terminal station. Silver went there and tried to kill Sonic, but was intervened by Shadow. Silver mistook Shadow for Mephiles and was confused why Mephiles would stop him. Shadow explained that Mephiles was trying to manipulate Silver in order to destroy time. Shadow and Silver then went 10 years into the past to see the "birth" of Mephiles and Iblis.

Afterwards, Silver, along with Sonic and Shadow, turned into Super forms to defeat Solaris, the fusion of Mephiles and Iblis. After the defeat, the timeline was altered so that Mephiles never existed, meaning Silver never met him.

Despite being removed from the timeline, Mephiles later returned in Sonic Runners as a Future type character alongside ESP Silver. 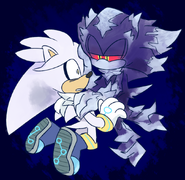 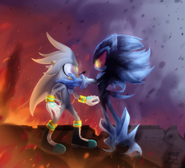