Brave
How to Train Your Dragon

Mericcup is the het ship between Merida and Hiccup from the Brave and How to Train Your Dragon fandoms.

Merida and Hiccup never meet due to Hiccup being a DreamWorks character, while Merida is a Disney character. Both Hiccup and Merida have had some troubles with one of their parents, to which they eventually sort out.

The crossover pairing is one of the popular ships of the Rise of the Brave Tangled Dragons fandom and its sup-fandoms. Most of the fandom's created AU's are for the two. In The Hunger Games AU's the two are depicted as Katniss and Peeta. In Super Mario AU's, the two are often cast as Luigi and Daisy. While a Viking AU has Merida as a Viking maiden warrior or a dragon rider, where some of the manip fan art of Viking Merida has her wearing Astrid or Valka's clothing, or something similar to them. After How to Train Your Dragon: The Hidden World was released, a few Mericcup fans began to create many manips that features Merida in a Mericcup version of the third film's wedding scene. Along with fans having Hiccup and Merida switch their Viking and Scottish heritage for culture/role swap AU's. There have even been a few Once Upon A Time AU's. In some AU's Merida and Hiccup are the parents of Mary Katherine from Epic and Justin from Justin and the Knights of Valour.

In Brave, there is a mention of a feud between Merida's kingdom and Vikings. As such, it has lead to fanfics of Hiccup's tribe being enemies of DunBroch. This could lead to scenarios where the two start out as enemies and eventually fall in love, in a similar way to Romeo and Juliet. There have even been versions where Hiccup is presented as one of the suitors for Merida's hand in marriage, in hopes that their alliance would bring peace between their people and lands. Like in the film, Merida wants nothing to do with the plans that have been set before her until she and Hiccup get to know each other better; and see that their arranged marriage can be of love as well as duty.

There have also been times when the ship has Merida as the Light Fury's rider or human trusting friend. Since both Hiccup and Toothless have green eyes, while Merida and the unnamed Light Fury's eyes are blue; along with having both Mericcup and NightLight shipped beside each other. The idea of having the Light Fury as Merida's dragon, had also gotten a few fans to feature Merida as a human-dragon hybrid beside Hiccup whenever he is placed one, by merging them with the Light Fury and Toothless. On AO3, Mericcup is the most written ship for Merida and fourth for Hiccup.

Mericcup on the Rise of the Brave Tangled Dragons Wiki 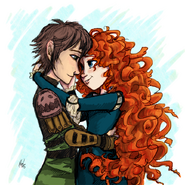 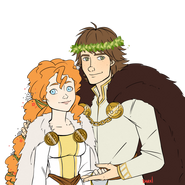 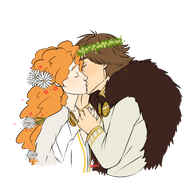 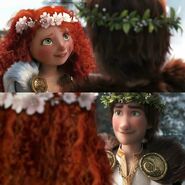 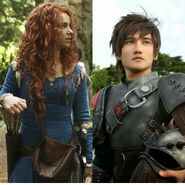 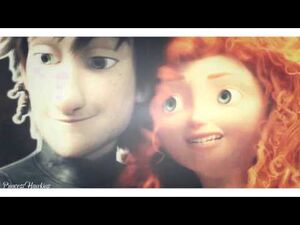 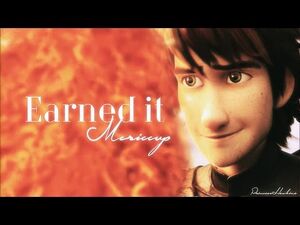 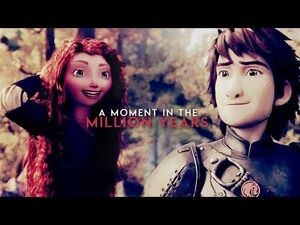 Mericcup -- a moment in a million years