Shipping Wiki
Register
Don't have an account?
Sign In
Advertisement
in: Ships, Ships/Femslash, Once Upon A Time/Ships,
and 7 more

Once Upon A Time
Disney

Friends (OUaT)
Never Met (outside of HoM or RBTI; Disney)

Mermaid Beauty is the femslash ship between Ariel and Belle from the Once Upon A Time and Disney fandoms.

Ariel meets Belle when Mr. Gold and Regina Mills sends the mermaid to Storybrooke, with the task of finding her so they could find and retrieve a powerful item for them. Once Ariel arrives in Storybrooke, she asks one of its locals where she can find Belle before Leroy bring the mermaid to her at the diner. After Belle hears that Rumple is the one who sent Ariel to her, she gives Belle the enchanted sand dollar that Mr. Gold asked Ariel to give to Belle as a staring point to want he needs the two to find, before Belle and Ariel head immediately to the pawn shop so they could look for this mysterious object that will Mr. Gold and Regina defeat Pan without killing him.

After Ariel changes into more modern clothes while Belle uncovers Rumpel's hidden message, they begin to search through the shop. As they search up and low Ariel tells Belle a bit about Eric and how she felt that it didn't work out between them until Belle shares her thoughts and feelings she has for Mr. Gold and that she shouldn't give up on the love she has for Eric or the hope of her being reunited with him. Once they found Pandora's Box, Belle shares what she knows about it with Ariel and that she is surprised to learn that Mr. Gold has such a powerful box in their shop.

Before the two women could talk about bringing the box back to Neverland, two strangers walk into the back room with guns that they use to hold both Belle and Ariel at gunpoint, before tying them up in two chairs that back-to-back to each other; and for Ariel's safety Belle tell her that they should obey their demeaned, much to Ariel's confusion. After being interrogate by them about the box they leave Belle and Ariel, without untying them, the women began to struggle in hopes that they be able to break free of their binds and as Belle begins to lose faith in herself and apologizes to Ariel about her never being able to be with Eric, until the mermaid tells her about the bracelet she is wearing and how it can help them get free. Once Belle removes it from her new friend's wrist Ariel's legs transform back into their natural tail, and the two women fall over; after Ariel is loose enough for her to untie herself before help Belle; Ariel puts the bracelet back on so they could immediately leave the shop and retrieve the box.

Once they despatched from the two men, who only wanted to keep their sister safe since Pan is holding her captive, and simplify after they got Pandora's Box back, Ariel and Belle head to Storybrooke's shoreline where they say goodbye to each other. Ariel promises Belle that she'll deliver her message to Mr. Gold before taking off the bracelet and leaves to make her way back to Neverland.

Their paths later crossed with each others again when Ariel needed help to find Eric in Storybrooke. Belle is happy to see Ariel again and the two hug each other before explaining her reasons as to why she has returned to Storybrooke before they begin to look through the shop to see if there is anything that could have them find him.

While the ship is commonly focused on OUaT's version of the two, there are fans who ship the two in the Disney versions as well. Fans will sometime's depict the two in Modern AU's and have them in their modern clothes from Ralph Breaks the Internet. The OUAT version is typically a second ship in many Rumbelle fics. On AO3, the OUaT version has 16 fics, while the Disney version has 15. 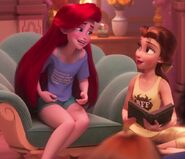 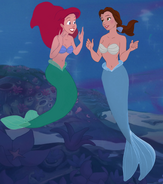 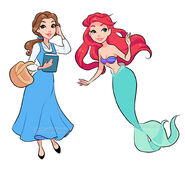 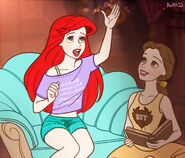 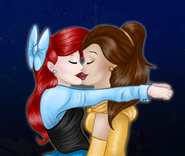 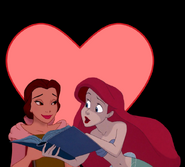 Desert Mermaid Beauty refers to the ship between Ariel, Belle and Jasmine