Metadow is the non-binary ship between Metal Sonic and Shadow from the Sonic the Hedgehog fandom.

In Sonic Heroes, Neo Metal Sonic was able to attain all of the ultimate life form’s data after Team Dark destroyed the Egg Albatross. During Last Story, Team Dark defeated Neo Metal Sonic as Metal Madness, allowing Team Sonic to defeat the metal monstrosity in its final form. After the robot's final de-transformation, E-123 Omega picked up the disabled Metal Sonic with Shadow standing beside.

In Shadow's Story of Sonic Rivals, Metal Sonic (under the control of Eggman Nega) and Shadow raced against each other a few times.

Doctor Eggman reprogrammed Metal Sonic before the events of Sonic Rivals 2. In the Shadow and Metal Sonic story of the game, they team up against Eggman Nega as he used Chaos Emeralds to open a portal bringing Ifrit into the world. The pair were able to defeat Ifrit and return to their dimension by a Chaos Emerald hidden in Metal Sonic's body.

The two Sonics have a separate Rival Battle against the two in Sonic Generations.

In Sonic Forces, copies of Metal, Shadow, Chaos and Zavok take down Sonic while Tails cowers behind. The actual black hedgehog later joins the rest of the main characters in the climax, battling against the copies.

Sonic asks Shadow for help defeating Metal in Moebius, though both black hedgehog and robot used their teleportation powers to go into another zone. In the final issue of Sonic X, they inadvertently interrupt a tea party at the Thorndyke mansion where X!Sonic, Cream, her pet Chao Cheese, and her mother are sitting. Metal thinks they both arrived at an “undocumented zone” and flies away to find its “resident Dr. Robotnik”. Sonic gives Prime Shadow a look around at Station Square, with its inhabitants thinking the black hedgehog was dead. At the beach, the two hedgehogs get confronted by X!Eggman and Prime Metal. The latter resumes his clash with the black hedgehog, who uses Chaos Control to teleport them both once again to another unspecified location. Eggman later reveals that the Shadow that he briefly saw there was different from his zone’s.

The first issue of Sonic Universe continues off their confrontation in the Sol Zone. The black hedgehog offers him to turn against his creator, but the Metal slams him down to the sea and flies again to find the zone’s local Robotnik. Rescued by Blaze and Marine, the three dock at an island where Metal is still locating for his creator’s counterpart in the Sol Zone. With teamwork, the cat burns Metal, Shadow uses Spin Dash, and the raccooon finishes him off with a cannon shot. Though failed to save the robot, the hedeghog was able to acquire a Chaos Emerald to complete his primary objective.

Much later, Shadow gets captured by Metal Sonic 3.0 and was roboticized into Shadow Man. Metal apparently saves Shadow Man from Mega Man with the help of a Warp Ring, while the former continues to fight the humanoid.

Shadow, together with the rest of the major characters, invade Angel Island when Neo Metal Sonic took control of the Master Emerald. He faces Metal again on the same island when the Metal Virus broke out.

Metal Sonic and Shadow do not have a direct interaction with each other in Rise of Lyric or the first season of the cartoon.

In the part two of “Eggman: the Video Game”, Sonic and Shadow went into Lord Eggman's dimension after the latter realized he has been fooled by Doctor Eggman. Upon entering the alternate dimension they were met by Metal Sonic and the doctor. The hedgehogs fought against the robot, but despite Metal taking the upper hand at one moment none of them get tired. Eggman fired a rocket upon the three and the blast pushed the three back. He moved his Eggmobile, not knowing that he dropped and activated his Inter-dimensional Portal Creator. Shadow and Sonic jumped through the portal back into the Sonic Boom World while both hedgehogs carried Metal. After a short chase to the village, Shadow charged at Metal. The robot reacted by using his laser beam to push the black hedgehog and the Eggmobile (rider included) to a wooden building. After Team Sonic disabled Metal Sonic, Shadow appeared nearby warning the team that he brought both Eggmen to an unknown location, causing a likely "end of the world" as the episode title suggests. The reprogrammed robot was still in the cave when Shadow appeared to Sonic, vowing to meet him again in his own terms.

This ship has some following, though not as much as the more-popular ships involving Sonic: Metonic and Shadonic. A handful of fan-made stories and art exist for this pairing.

Fans appreciate their rivalry and backstory, especially involving Sonic. Others wish them to be a common antagonist against the blue hedgehog, or go in missions together initiated by Eggman or G.U.N. 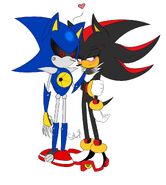