Metamy is the non-binary ship between Metal Sonic and Amy from the Sonic the Hedgehog fandom.

Both Amy and Metal Sonic debuted in Sonic the Hedgehog CD. After a short affectionate admiration for Sonic, Amy gets captured by Metal in the first act of Collision Chaos. They both appear again in the third act of Stardust Speedway where Sonic raced Metal and won, and untied Amy right after.

Metal and Amy have little interactions in later games, except in spin-offs like Sonic R or the Mario & Sonic series. Even in Sonic Forces, where Amy and her allies fought clones of Metal, amongst the few other antagonists from previous games, in the final battle.

In the opening of Rise of Lyric, Eggman commands Metal Sonic to hunt down Sonic and the rest of his team. Eventually, the four are cornered by a robot army as they tried to enter Lyric’s tomb. Metal Sonic appears from the sky and punches the ground, the resulting impact pushing Amy, Tails, and Knuckles back. As Metal and the army close in on the team, Sonic opens the tomb, calling on Amy, Tails and Knuckles to get inside. Later on, Metal Sonic (under the control of Lyric) steals a Chaos Crystal but Amy and her team were able to shut him down.

In the part two of “Eggman: the Video Game”, Sonic and Shadow lures Metal out of Lord Eggman's dimension and back into the Sonic Boom World. The rest of Team Sonic charge on the robot, with Amy leading. Metal picks up a metal bar and sticks it to a large rock, fashioning a hammer. Amy says that hammers are her thing and tries to land another hit, but the robot pushes her back with the makeshift hammer. Sonic, Tails, and Knuckles use Enerbeams to bind Metal, just as the robot prepares to fire a blast at an incapacitated Amy. Sticks uses her staff to shut down Metal.

Both appear in “From: A. Rose”. Amy strolled Angel Island one winter, and while brushing some snow off her head, the hedgehog tripped on Metal. The robot turned his head to face Amy, only to get hit in the head with her hammer. The pink hedgehog carried the robot, freeing a Flicky in the process. She then dragged it through Mushroom Hill Zone and IceCap Zone, and back to the lair of his creator. Right after ringing the doorbell, Amy placed a bow on his head, and a flower on his right hand. The hedgehog hid behind a rock before Eggman opened the door and brought the robot inside. Amy clapped her hands, feeling joy and fulfillment.

Metamy is a popular pairing for both characters, with a large following on Tumblr. Only the two ships involving Sonic, Sonetal and Sonamy, supersedes this. As of January 2021, there are fifteen fan-made works on Archive of Our Own, while Wattpad has four.

This ship’s popularity boomed after the release of “From: A. Rose”, where both are its two characters of focus. With this, many fan-art of Metal and Amy in their Classic forms were created in honor of the episode. 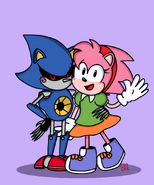