Metonic is the non-binary ship between Metal Sonic and Sonic from the Sonic the Hedgehog fandom.

Metal Sonic debuted in Sonic the Hedgehog CD. In the first act of Collision Chaos, Amy has a short affectionate admiration for Sonic. Metal appears from the spikes blocking the path further into the level and captures Amy. Later, Sonic and Metal race against each other in Stardust Speedway, with the former winning and releasing Amy right after.

The intro sequence has Dr. Robotnik finishing his work on Hyper Metal Sonic, a robot with the capability to kill Sonic. Robotnik was able to extract data from the blue hedgehog at the first part of the animation. After Sonic, Tails and Knuckles defeated Metal Robotnik, the mech opens revealing the doctor and Sara. Sonic rushes to Robotnik but is stopped by Hyper Metal Sonic. The doctor guarantees Sara's release after Sonic fights the robot first.

Eventually, the fight leads to a glaciers far up north when Metal attempts to melt them. The President's rocket crashes in to the ice, with him and the Old Man Owl trapped. As Sonic and Tails try to rescue them, Hyper Metal Sonic attacks them both. Sonic and Metal fight one last time, with Sonic pushing the robot into the rocket. The rocket explodes. Sonic, Tails, Knuckles, and Sara witness Hyper Metal Sonic carrying the President and the Old Man Owl out of the smoke, dropping them to safety. Suddenly, debris hits Metal, pushing him down to the rising magma. Sonic jumps down in an attempt to save the robot. The hedgehog asks for Hyper Metal Sonic's hand, but the robot pushes it off, replying that there is only one Sonic. The robot perishes into the lava, and Sonic screams "Metal" to his dismay.

Sonic has confronted at least 3 versions of Metal Sonic, including the first which was reformed into Shard the Metal Sonic.

The Sonic X Zone's Sonic briefly met Prime Zone's Metal Sonic as the latter was clashing with Shadow the Hedgehog across multiple dimensions.

Instead of a single Metal Sonic, an army of Metallix does a similar role. The first Metallix is revealed to be the Metal Sonic that captured Amy in the games, the same way as the future Shard the Metal Sonic did in the Archie comics.

Sonic and Shadow fought Neo Metal Sonic when the robot conquered Angel Island and took the Master Emerald for himself.

In the opening of Rise of Lyric, Eggman commands Metal Sonic to hunt down Sonic and the rest of his team. Eventually, the four are cornered by a robot army as they tried to enter Lyric's tomb. Metal Sonic appears from the sky and punches the ground, the resulting impact pushing Amy, Tails, and Knuckles back. As Metal and the army close in on the team, Sonic opens the tomb, calling on Amy, Tails and Knuckles to get inside. Sonic takes one last look on Metal as the door closes. Later on, Metal Sonic (under the control of Lyric) steals a Chaos Crystal but Team Sonic were able to shut him down.

In "It Wasn't Me, It Was the One-Armed Hedgehog", Sonic was framed for stealing items from Eggman and the villagers. During the hedgehog's independent investigation, he and Knuckles find a shack in the forest. Knuckles sees someone on the window, telling Sonic that he looks like him. The occupant disappears in a flash, puzzling Sonic. At that moment, Metal Sonic appears in front of Sonic and Knuckles. Knuckles try to use brute strength on the robot, but to no avail. Metal answers with a laser beam, knocking the echidna back despite an attempt by Sonic to lessen his impact. With Knuckles incapacitated, Sonic tells the robot that he will regret what he did. As Metal fires another laser at Sonic, the hedgehog jumps toward the shack's outer wall and scales it. The half-wall and roof falls on Sonic, and Metal celebrates his short victory. The hedgehog jumps from the rubble and Metal Sonic charges his laser, but it runs out of energy and cannot fire. Sonic proceeds to spin dash Metal multiple times, pinning the robot down by metal bars. Metal Sonic picks up Eggman's particle accelerator from the rubble, Sonic calling the move cheating. The blue hedgehog lets the robot to chase him to his shack. After a brief communication with the robot, Sonic throws a horseshoe at Metal's right forearm, overloading him and dropping the particle accelerator. The hedgehog returns the stolen items and reveals the culprit to the villagers. Eggman pretends to be unaware of his deceptive acts, bringing the disabled Metal Sonic and particle accelerator back home.

In the part two of "Eggman: the Video Game", Sonic and Shadow go into Lord Eggman's dimension after the latter realized he has been fooled by Eggman. Upon entering the alternate dimension they were met by Metal Sonic and the doctor. The hedgehogs fight against the robot, but despite Metal taking the upper hand at one moment none of them get tired. Eggman fires a rocket upon the three, the resulting blast pushing the three back. He moves his Eggmobile, not knowing that he dropped and activated his Inter-dimensional Portal Creator. Shadow and Sonic jump through the portal back into the Sonic Boom World, both hedgehogs carrying Metal. The fight continues into the village. Team Sonic use Enerbeams to bind Metal, and Sticks disable the robot using her staff. After Shadow threatens to end the world (since both Eggmen are in the same dimension), Tails reprograms Metal to activate a homing beacon that tracks Eggman's current location. As the robot flies off to its creator, Sonic follows him on his Blue Force One. The search ends in a cave with both Eggman tied up.

Sonic and his friends fight Metal Sonic at the end of Stardust Speedway Zone Act 2. After destroying a Metal Sonic Projector and releasing their animal friends, Metal appears. The robot chases them as they lead to an arena. Inside, Metal Sonic controls a generator that dispenses Silver Sonics. Sonic uses these robots to hit Metal; after a few hits, the generator is destroyed and the chase continues. It ends at the top of the zone where a large Eggman statue is on the background. Sonic and friends "race" around the statue against Metal as a spiked wall pushes behind them. Eight hits on Metal Sonic defeats him, breaking the spiked wall.

In Sonic Mania Plus, the chase goes the same way, but this time after reaching the top, Dr. Eggman on his Eggmobile throws the Phantom Ruby to Metal, the latter transforming into Giga Metal. Shattering the container that encloses the Ruby eight times destroys this form, defeating Metal Sonic.

In "Metal Mayhem", Sonic fights the powered-up Metal Sonic after the robot took his two of his Chaos Emeralds. He is later teamed up with Ray and Mighty. Defeated by teamwork, Eggman reveals the Master Emerald from the floor and empowers Metal Sonic with it. However, this is cut short by Knuckles as the echidna punches the robot, pushing him and Eggman out of his lair.

Sonic might have witnessed Amy returning Metal Sonic to Eggman in "From: A. Rose", as he is revealed beside her behind a rock.

This pairing has some popularity, as fans tend to pair Sonic and Metal romantically where otherwise they are enemies. Since September 2020, AO3 has 106 fan works of this ship while Wattpad has four.

One notable Metonic artist is TheEnigmaMachine, who has been hosting a Metonic ship week on AO3, DeviantArt, and Tumblr since 2018. 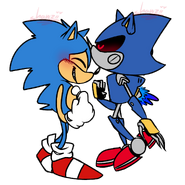 by Shawzii--Drawz
Add a photo to this gallery

Retrieved from "https://shipping.fandom.com/wiki/Metonic?oldid=255619"
Community content is available under CC-BY-SA unless otherwise noted.