Shipping Wiki
Register
Don't have an account?
Sign In
Advertisement
in: Ships, Ships/Het, One Piece/Ships,
and 5 more

MihRona is the het ship between Dracule Mihawk and Perona from the One Piece fandom.

Perona and Dracule Mihawk first met when Perona was sent to his island, Kuraigana Island, by Bartholomew Kuma's powers. She quickly took up residency, alongside Roronoa Zoro who was later sent to the same location, and has remained there since. Despite Mihawk preferring solitude, he quickly accepted Perona's presence, although reluctantly so. His hospitality is pretty minimal and found her irritating. Perona assisted Mihawk in his training of Zoro throughout the two-year time skip.

For the most part, since Zoro's departure, Perona has built a tolerable relationship with Mihawk and even returned to the island when she recovered Kumashi, her stuffed, but very much alive, toy. She even starts to work with Mihawk to cultivate his land which suggests a good status between them. She also starts to cook for him and attends to various chores around the island, although Mihawk appears to be more than capable of doing this himself, and even better than her.

However, she would express great irritation with Mihawk after she later found out her captain, Gecko Moria, was actually alive and he had not informed her of this. She berated him, but Mihawk remained indifferent and stoic, simply ignoring her complaints. In a tantrum, Perona grabbed her things and sternly informed Mihawk that she is leaving. Before she can do so, Mihawk tells her to "be careful" on her travels which causes her to turn around and cry at what are very likely the first kind words he has ever said to her.

Despite his stoic ways, and the fact he was somewhat confused by her tears when he told her to remain safe, he does seem to genuinely care for her. This is evident when he explains that it is best for her safety to leave, as his status as a warlord has been stripped from him, making him a target of the Marines and the World Government. By the time the Marines arrived at his island, there was no sign of Perona there.

MihRona is a fairly popular pairing within the fandom. It is one of few One Piece pairings where there has been a substantial amount of time spent together, as Mihawk and Perona have been by each other's side now for at least two years. Their moments can be seen closely as husband and wife, with how Perona tries to care for Mihawk and how he has shown worry for her safety. There has been a sense of romantic overtones between them and the fandom generally expects this to continue.

A major reason for the popularity of ship is that Mihawk and Perona seem to be a genuinely good fit for each other due to their horror themes, with Mihawk being named after Dracula and Perona being the Ghost Princess. Critics of the pairing have pointed out their age difference, and thus see their relationship more as father and daughter. A retort to this is that whilst here is a gap, it is still perfectly acceptable, Perona being 25 and Mihawk 43. The only real rival ship to this pairing is ZoRona, the ship between Roronoa Zoro and Perona.

Furthermore, MihRona fans think that Perona and Mihawk have a great combination and that they should stay together, as Perona's "horo no mi" fruit could be of great help to Mihawk in the upcoming Warlords vs Navy battle. 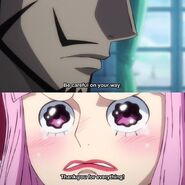 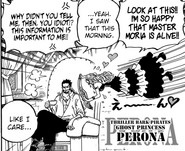 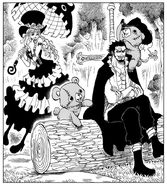 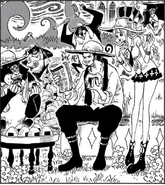