Shipping Wiki
Register
Don't have an account?
Sign In
Advertisement
in: Ships, Ships/Poly, Seraph of the End/Ships,
and 7 more

Seraph of the End

Friends/Comrades
Shinoa and Mikaela have feelings for Yuichiro

MikaYuuNoa is the poly ship between Mikaela Hyakuya, Shinoa Hiiragi and Yuichiro Hyakuya from the Seraph of the End fandom.

Mikaela, Shinoa and Yuichiro are main characters of the Seraph of the End series. Given that, they share a decent amount of interactions. Yuichiro often mentiones Mikaela, when he talks with Shinoa. Both, Shinoa and Mika also appear to have romantic feelings for Yuichiro, although he appears to be to dense to notice it.

Shinoa also seems to recognize how important Mikaela is to Yuichiro. After, Mika attacked the Moon Demon Army to rescue Yuichiro. He almost dies, but Shinoa defends him, because he is Yuichiro's family member. Shinoa also let's Mikaela escape with Yuichiro.

In Chapter 43, it's shown that Mikaela absolutely doesn't trusts Shinoa. He makes her responsible for what happened with Yuichiro. Shinoa in turn, tries to earn Mikaela's respect, with trying to give him a bottle of blood. Though his failed, Yuichiro genuinely tried to resolve Mikaela's "conflict" with Shinoa.

Later, Shikama Doji ask's Shinoa if she's interested in a way to turn Mikaela back in a human. Shikama Dokji, further say's, that her beloved (Yuichiro) would be happy to see Mikaela as a human again. Yet, Shinoa still anwers that she isn't interested. Seemingly knowing what Shinoa interests, Shikama Doji asks the counter-question if she's intersted in a way to turn Yuichiro back in a human, what actually seemed to interest Shinoa.

“Go. And take Yuichiro with you.”
— Shinoa to Mika.

MikaYuuNoa is often shipped by people who can't decide between MikaYuu and YuuNoa, or sometimes also MikaNoa. It's also sometimes shipped to avoid ship wars between YuuNoa and MikaYuu shippers. Mika and Shinoa's romantic feelings for Yuichiro, where the main Inspiration behind the ship. Supporters of the ship wish that Yuichiro wouldn't chose between Mika and Shinoa, and would just date both.

The ship is a rare-pair within the Seraph of the End fandom. Likely, because MikaYuu, MikaNoa and YuuNoa, are way more popular as separate ships and not as poly ship.

The ship currently has about 15 fanfictions on it's AO3 tag 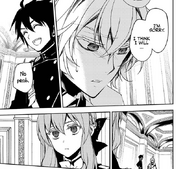