In love; Separated due to Eleven moving away

Mileven is the het ship between Jane "Eleven" Hopper and Mike Wheeler from the Stranger Things fandom.

As Eleven ran for her life from a government laboratory tucked away in Hawkins, Indiana, Mike, Dustin, and Lucas find her in the pouring rain, in the woods while looking for their missing party member, Will Byers.

Mike was not aware of her telekinetic abilities when he decided to bring her into his home. As they noticed "weird" qualities about her, they questioned her upbringing, wondering why she isn't talking or why she has a shaved head. Dustin and Lucas were hesitant of Mike letting a strange girl stay the night despite his compassionate nature. When the boys left, Mike sat down with her and started talking to Eleven in hopes she would open up a little bit. When he asked her what her name was, she showed him her "011" tattoo. Instead of judging her for it, he was impressed.

As the journey went on for a bit longer, Eleven and Mike became extremely close after Hopper and Joyce set off to go find Will and save him from the upside down after Eleven had seen him in physic visions. While everyone else goes to either fight the Demogorgon or get Will the boys and Eleven stay in Hawkins Middle School. Mike tells Eleven after they defeat the bad men and the Demogorgon, Eleven would be able to come home with Mike, where Mike's mom could take care of her. Eleven mistakes Mike for being her brother, but Mike goes on to try and explain what it would be like instead. Fumbling with his words, he decides to kiss her instead. She is stunned, but happy.

Going to confront the Demogorgon, and Eleven's powers drained, they take her to a classroom. Mike promises to take Eleven to the Snowball once everything is over. The Demogorgon stops them, though, and Eleven says a final goodbye before sacrificing herself and being taken to the Upside Down.

During this season Michael is still mournful over the disappearance of Eleven and tries to contact her through the supercomm often. He spoke to her every night for comfort and in the hopes that she was listening or would return. Eleven also tried to communicate with him, but due to Jim Hoppers orders (her adoptive father) she was not allowed to make direct contact to him. For his own safety and her own.

Eleven becomes rebellious and decides to leave the cabin to see Mike at school. Upon her arrival she finds Mike, she is behind the glass door of the gymnasium and is cheerful to see him but then she spots Max, she misinterprets the scene and becomes jealous. Using her telekinesis she throws Max off her skateboard and leaves upset, questioning whether he was still waiting for her. Mike immediately suspects that it was Eleven and rushes out to find her, but she has already left.

The two reunite at the end of episode eight, Mike sobbing while Eleven makes a badass entrance through the front door after killing a ring of demodogs circling the Byers house. Before Eleven leaves to close the upside down, the two attempt to kiss, but Hopper interrupts them.

After fighting the monsters from the upside down, the two go to the Hawkins Middle School Dance, the Snow Ball, together. Mike and Eleven kiss while slow dancing. They are finally reunited but the scene pans out to the mindflayer watching, which some have interpreted as troublesome foreshadowing for the couple.

The season starts off with the two in a good place. As we later learn from Hopper, the two have been seeing each other every day for the past six months. The two are kissing in Eleven's room and Hopper sees them through a crack in the door. This causes the two to quickly pretend they are reading. They joke about it as Mike rides home.

Mike's friends tease him about the amount of time he is spending with Eleven, both at the mall, and when Dustin comes back home from camp. Mike takes Eleven home early, leaving the gang. The two once more make out in Eleven's room, when Hopper comes in to talk to set boundaries. He instead scares Mike off, causing him to lie to Eleven, in which Max prompts Eleven to "dump his ass". This leaves Mike wondering what he has done, causing him to call girls "the female species", which Eleven hears while spying on Mike, Lucas, and Will in the void. The two are not far from each other, as Eleven is sad that her and Mike broke up, even telling Max Mike was her first boyfriend.

After getting a code red, Eleven and Max meet up with the boys, where Eleven and Mike get into an argument at the pool. Mike tells her how she is the most important thing to him, but Eleven tells him off for a few things, and eventually tells him she makes her own rules. They eventually make up after Eleven is almost choked to death by Billy and Mike puts his life on the line to save her although Eleven was so tired and drained she pulled herself together to save Mike and then the two share a heartwarming moment with a bag of M&Ms.

With the final battle approaching, Eleven goes to spy on Billy when Max and Mike get into a heated argument, where Mike blurts out that he can't lose Eleven because he loves her, leaving everyone with their jaws to the floor. Eleven comes in and he brushes it off. After yet another brush with death, Mike carries Eleven (with Max) to a convenience store where the gang breaks in to heal her. They share yet another moment where Mike tells her he hates that they broke up even though by now they got back together. She agrees, and he tells her "blank makes people crazy", but she doesn't get it.

During the final battle, he watches as she removes part of the Mind Flayer from her leg. Billy later attacks Mike, Eleven, and Max, causing Eleven to be captured. After defeating the Mind Flayer, the two are reunited, sharing a hug.

With Hopper's death, Eleven has to move with the Byers. While packing, Mike excitedly talks about the two getting to see each other. Eleven brings up that she did hear Mike say he loves her, telling him she loves him too. They share a goodbye kiss, and a few more tearful goodbye hugs and kisses before she gets into the moving truck, leaving Mike and her friends behind in Hawkins.

Dancing at the Snow Ball

Dancing at the Snow Ball
Add a photo to this gallery 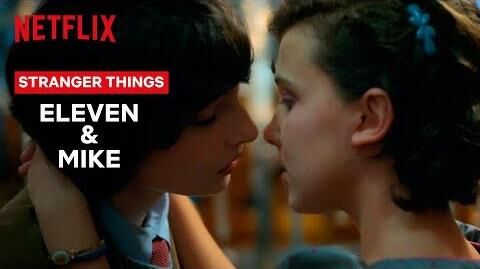 Retrieved from "https://shipping.fandom.com/wiki/Mileven?oldid=259748"
Community content is available under CC-BY-SA unless otherwise noted.