Former Allies/Enemies; Both are dead

Military Funding is the slash ship between Arthur Watts and James Ironwood from the RWBY fandom.

In Volume 7, it is revealed that Watts used to have a professional working history with Ironwood. Ironwood considered Watts to be "a pain in the ass". Watts on the other hand blames Ironwood entirely for his downfall and eventual disgracement.

During the grimm invasioin in Mantle, Watts goes to Amity Tower to try and sabotage it. He only then gets confronted by Ironwood, revealing to him that Amity was a trap to lure him out. Watts then activates the Anti-Gravity biome and pulls out his gun proclaiming to Ironwood that he won't be going down without a fight. During their fight, Watts claims Ironwood never appreciated his genius, saying that he just stood a top it and called himself a giant.

Ironwood then angrily disagrees saying that he gave Watts everything he could have wanted, to which Watts retaliates by saying that he chose that "fat imbecile" over him. Watts then manages to pin ironwood's arm to a chain, saying not to move it or else he'll lose the other arm aswell. After Ironwood escapes the bind and manages to defeat Watts, he tells him that he'd be willing to sacrifice everything to stop Salem. Watts then spits at him, and smugly responds "I hope you do James".

In volume 8 chapter 3, Ironwood releases Watts from his cell so he can try and help him hack into Penny's system to regain the Winter Maiden powers. He even goes so far as to have his men hold Watts at gunpoint to ensure he doesn't try to backstab him. It is also implied that Ironwood had to use physical force to get Watts to cooperate with him. Later, when Watts is saved by Cinder and manages to escape, Ironwood is infuriated.

Military funding is a rarepair in the rwby fandom. Mainly because of the lack of scenes between the two. People who do ship the two like the shared history that the two have and that they used to work together. Fans of this couple very much appreciated the scene where Ironwood suggestively put his hands on Watts's shoulders, some even jokingly saying they have "gay ex energy". It has a small fanbase on Tumblr. 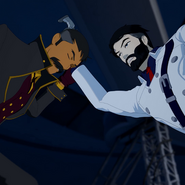