MinaMomo is the femslash ship between Mina Ashido and Momo Yaoyorozu from the My Hero Academia fandom.

Mina, alongside Denki confesses that she hadn’t studied at all for their Final Exams, which would be in one week. She holds her arms behind her head and laughs in a lax manner until teased by Minoru for their low academic standings. Momo then drops into the mix, and offers her tutelage to the two, and Mina clasps her hands together gratefully, saying “Yao-Momo!!’ Momo ends up with an entire study group after Mashirao, Hanta and Kyoka ask for her assistance as well. The party are later seen arriving at the gate of Momo’s house, and Mina is shown to be shocked by the now apparent size of Momo’s wealth. After Momo welcomes them in, they sit at a table as she teaches. Although Mina ends up failing the exam, she still gladly thanks Momo for her help.

Upon moving into the dorms, Class 1-A holds a competition amongst themselves to see who has the best room. Mina and Momo are seen near one another a number of times throughout the event. As they tour Kyoka’s room, Momo is shown looking at something offscreen. Beside her stands Mina, who appears as if she’s watching Momo. Later, when they reach Rikido’s room, the girls stay close as they consume the cake they were given. At the competition’s end, Rikido’s room is voted best. When questioned, the girls simultaneously answer the cake. Once again, Momo and Mina stand together.

After deciding that live music would be a good fit for 1-A’s contribution to the U.A Festival, Kyoka takes it upon herself to scout a band. She gets Katsuki on drums, and later, the duo of Fumikage and Denki as guitarist, but decides she needs someone on keyboard to add synth sounds to the music. Momo offers herself for this role, revealing that she had experience- as well as interest in piano, which could easily be translated into keyboard. Mina mopes at this, as she’d originally planned for Momo to partake in the dance she was choreographing, and was upset to lose her. However, placing a hand on Momo’s waist, she tells Momo that she ‘forgives’ her for leaving the dance squad because she’s so cute, although her face remains amusingly saddened.

Similarly to the more popular MomoJiro, MinaMomo consists of the elegant, classy Momo with a wilder girl, in this case being Mina, who’s known for her fun-loving, rambunctious personality, as well as her pink skin (and hair) and incredible confidence, something of which Momo lacks on her own, but could and can easily build up with the assistance of another, especially someone as caring as Mina. Fans of the ship adore the contrast between the two, especially with the added factor of Momo’s shyness.

As evident, the girls have about the largest physical contrast amongst the girls of 1-A; Mina is undoubtedly the most abnormal of all, with her unique, alien-like appearance, while Momo perfectly fits the standard mold of a typical human with no abnormalities, although her beauty is one rare. Even so, Momo comes across as much more insecure about herself than Mina has ever hinted to be. From fans, this draws the common trope of Mina helping Momo to love her own self. 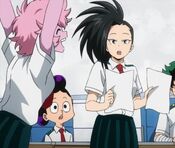 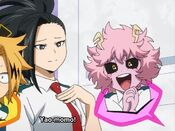