MinaOcha is the femslash ship between Ochako Uraraka and Mina Ashido from the My Hero Academia fandom.

Like the rest of the 1-A girls, Ochako and Mina are close friends, and despite Mina’s lack of screen-time (due to being a background-ish character), are commonly seen alongside one another. Mina was the first of the girls to realize that Ochaco had a crush on someone and often teases her for it.

While Mina does have a tendency to over-involve herself in the romantic encounters of others, as shown by her reaction to Emi’s “proposal” to Shota, Ochako’s feelings for Izuku seem to be of greatest interest to her. This can be interpreted in several manners, one of which being that she wishes to track Ochako’s feelings in hopes that she falls out of love with Izuku. By all intents and purposes, Mina is easily one of the staunchest supports of an eventual relationship between Izuku and Ochako. This shows just how strongly she cares about Ochako’s happiness.

During the Training of the Dead OVA, it's seen both girls sharing screen together alongside with Shoto and Izuku, seen as the only survivors of the Romero Fujimi's quirk; Zombie. When All Might came for rescuing the guys, he appeared with his weak form and with that little mistake, it made think the girls that he was a zombie that appeared from nowhere while hugging each other, it's seen later running away pulling a shocked Midoriya together. Once the survivors found a place to hide, Ochako said that if the situation gets even dangerous, the teachers would help them, which made Mina nod a lot in signal that Ochako was right on that. Later when they thought they were fine, the people infected by the quirk arrived to the place they hided and with brute force they were destroying the ice wall that Shoto made for safety, in the next scene it's seen both girls hugging again in sign of fear. After the incident, both girls didn't appear later.

The first major interaction between the two was shortly after the "super moves training" for the Provisional Hero License Exam, the girls of 1-A can be seen relaxing in the common room of the Heights Alliance building as they discuss the hardship of heroics. Ochako is asked about her special move, but she does not respond, instead continues to stare blankly at nothing. Tsuyu nudges and startles her, snapping back to reality. She responds that she still has a long way to go until she can say anything certainly, but her heart has been feeling flustered as of late. Mina becomes excited and comments, “It’s love!!”, much to Ochako’s shock. She denies flurriedly, but Mina pries further, going as far as to question whether she is in love with Izuku or Tenya, as she’s noticed the way she hangs around them. Ochako becomes somehow more flustered to the point of floating. Mina giggles at the sight of her blushing in the air. Before she can continue to question her, Tsuyu and Momo tell Mina to stop meddling in Ochako’s love-life before heading to bed.

Mina's words continue to be etched in Ochako's mind, even lately, and Mina increasingly shows interest in the moments that she can see Ochako and Izuku together. Mina also congratulates Ochako when she makes her debut as a hero, fighting two villains with Nejire, Tsuyu and Ryukyu. When Ochako participates in Shie Hassaikai's raid, Mina is worried about her and was excited and relieved when Ochako and the other students involved return home. When Ochako sees Mina with Koji's rabbit, she approaches her and Mina encouraged Ochako and Tsuyu to pet the rabbit.

As everyone prepares for the Cultural Festival, Ochako is seen calmly fixing Mina's skirt and when Joint Training begins, they are both on the same team, along with Izuku and Minoru. Before her team's battle against Class 1-B, you can see various moments of Mina and Ochako talking to each other, such as when Mina emphasized that Ochako knows Izuku's gestures and changes and Ochako was so embarrassed that she accidentally used her Quirk on Mina and made her float through the air. When the joint training is over, Mina walks over to Ochako and taunts her for grabbing Izuku so hard in her attempt to save him, implying that she knows he likes him, causing Ochako to turn very red with embarrassment.

Before a session in which Class 1-A has to show their progress, the Class girls were putting on their Hero costumes and Mina takes Ochaco's helmet to pass it to him, but discovers the All Might keychain that Izuku gave to Ochako at the Christmas party and smiled while getting excited and Ochaco blushed as he tried to deny it. When the class session ends, Mina witnesses a cutesy exchange between Ochako and Izuku in which the two blush and bump fists. She watches this with much delight.

MinaOcha is considered more of a rarepair within the MHA fandom as it isn't as popular as other ships. It is very overshadowed by ships like - for example - TsuChako, IzuOcha or KiriMina. The pairing sailed, because of the close friendship between the two girls - similarly to KiriBaku and TodoDeku - as well as the lack of femslash ships for Mina. The ship got more popular after Mina teased Ochako about her crush on Izuku. MinaOcha is the most popular ship for Mina. A pink aesthetic for the pairing is quite common, since Mina's hair and skin is pink and parts of Ochako's costume is pink. Also Mina can be interpreted as a "wingman" for IzuOcha, that's why people would ship MinaOcha and IzuOcha at the same time. 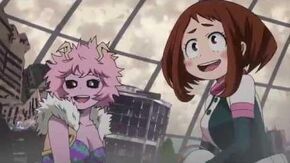 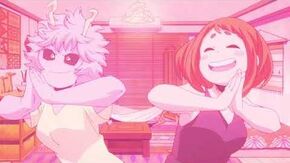 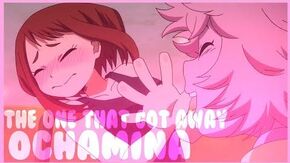 The one that got away - Ochamina 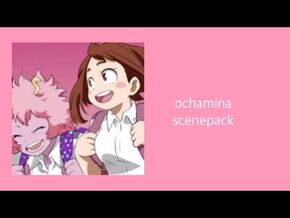