Minash is the het ship between Mina and Ash from the Sonic the Hedgehog fandom.

After Sonic disappeared and was presumed dead, Mina met Ash. Ash became Mina's manager and later, the two started dating. When Sonic returned to Mobius, Ash was quick to inform Sonic that he was dating Mina. Learning Sonic was alive, Mina started to develop mixed feelings for her new relationship, as she still had feelings for Sonic. Due to this, Ash started to feel antagonistic towards Sonic. Mina also revealed that she was unsure if she loved Ash.

Realizing she had been selfish towards Ash, Mina decided to ask for relationship advice by writing an anonymous letter to a newspaper column. Mina followed the advice given to her and decided to give Ash a chance.

After hearing Mina's songs on the radio, Dr. Eggman tried to assassinate Mina. Sonic was chosen as her bodyguard, causing further conflict between him and Ash. Ash tried to repeatedly have Sonic removed from this task, as he felt his position as Mina's boyfriend was threatened. Before one of Mina's concerts, Ash asked Mina to tell him that she loved him and didn't love Sonic. Mina couldn't bring herself to say that, causing the two to break up.

During Mina's concert, former Chaotix members Heavy and Bomb attempted to assassinate her. After Heavy's defeat, Ash and Mina found the remaining bomb in the dressing room. Ash risked his life by grabbing the bomb and taking it away from the building. Ash was injured following the event, and Mina cried over his hospital bed. After Ash woke up, he smiled at her. It became apparent Mina truly had feelings for Ash, and while Sonic still had a place in her heart, Ash was the one Mina loved.

Later during the tour, Mammoth Mogul took control of Mina, having marked her in the past. Sonic and Ash put aside their old conflict and teamed up to save her. After the tour, Ash admitted to Sonic that he had been a jerk.

Afterwards, Ash and Mina had been nearly inseparable. While Ash appeared to be cold, Mina could bring up a warmer side of him.

There are many who like the pairing due to their canon status, clear feelings for each other after Ash risked his life to save Mina and their band together. Some think Ash should have ended up with Mina in the Light Mobius timeline instead of Tails, as many feel their marriage makes no sense. Also, unlike Tailina and Sonmina, Minash does not conflict with the many ships involving Tails or Sonic.

However, others dislike the pairing, as Ash was introduced for the sole purpose of being Mina's boyfriend. The pairing also rivals Sonmina, which some feel is a relationship done right. Other rival ships include Manina and Ashaffron. 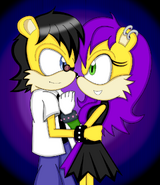