Minochaco is the femslash ship between Ochako Uraraka and Mina Ashido from the My Hero Academia fandom.

Much like most girls in class 1-A, they appear to be good friends with each other and are seen together quite frequently, but Mina doesn't have as much screen time, and when she does, she's often with Ochako.

Shortly after the super move training, the Class 1-A girls are relaxing in the common space on the first floor of their dorms and they comment on the rough training. Uraraka is asked about her special move, but she does not respond and appears depressed. After Tsuyu nudges her, Uraraka snaps back to reality and says that she still has a long way to go, but her heart has been flustered recently. Ashido comments that Uraraka is in love, much to her shock. Uraraka denies this fact, but Ashido pries further and asks if she is in love with Midoriya or Iida, as she's around them a lot, causing Uraraka to start floating due to embarrassment. She says that her friendship is not like that. Tsuyu and Yaoyorozu tell Ashido not to pry into another's love life and decide to head to bed. Uraraka sees Midoriya training outside, and thinks to herself again while blushing that it is not like what Ashido said.

During Training of the Dead arc, it's seen both girls sharing screen together alongside with Todoroki and Midoriya, seen as the only survivors of the Romero Fujimi's quirk; Zombie. When All Might came for rescuing the guys, he appeared with his weak form and with that little mistake, it made think the girls that he was a zombie that appeared from nowhere while hugging eachother, it's seen later running away pulling a shocked Midoriya together. Once the survivors found a place to hide, Ochako said that if the situation gets even dangerous, the teachers would help them, which made Mina nod a lot in signal that Uraraka was right on that. Later when they thought they were fine, the people infected by the quirk arrived to the place they hided and with brute force they were destroying the ice wall that Todoroki made for safety, in the next scene it's seen both girls hugging again in sign of fear. After the incident, both girls didn't appear later.

While everyone were preparing themselves for the cultural festival, it's seen in a scene that Ochako was fixing Mina's skirt.

MinOchaco is considered more of a rarepair in the MHA fandom. It is very overshadowed by ships like - for example - TsuChako, IzuOcha or KiriMina. The pairing sailed, because of the close friendship between the two girls - similarly to KiriBaku and TodoDeku - as well as the lack of femslash ships for Mina. The ship got more popular after Mina teased Ochako about her crush on Izuku. MinaOchako is the most popular ship for Mina. A pink aesthetic for the pairing is quite common. 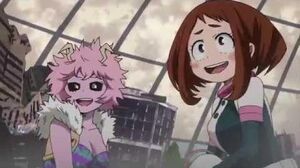 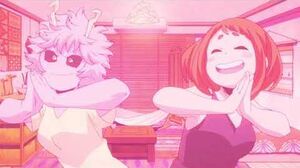 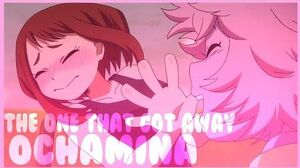 The one that got away - Ochamina

Retrieved from "https://shipping.fandom.com/wiki/Minochaco?oldid=238282"
Community content is available under CC-BY-SA unless otherwise noted.