MiriTama is the slash ship between Mirio Togata and Tamaki Amajiki from the My Hero Academia fandom.

Tamaki transferred to his new school during the spring, his first day as a third grader. Tamaki could not give a proper self-introduction and after the opening ceremony where they moved into the classrooms and formed groups, Tamaki was not able to insert himself into any group because he lacked the courage. Due to considering himself a boring person, Tamaki was not able to make any friends. Mirio Togata warmly opened up to Tamaki during their first interaction, when Mirio asked him if Tamaki had been trying to talk about heroes in his stuttering introduction and if so who his favorite hero was. It was this recognition that began the friendship between Tamaki and Mirio.[1]

In middle school during a Quirk Education class, Tamaki tried manifesting something but only managed to manifest a tiny plant on his hand due to his nervousness. Meanwhile, Mirio tried phasing through a wall but only managed to phase his hands through it. Some of Mirio's classmates laughed at Mirio's struggles, but Mirio was not disheartened at all and resolved to pull off his phasing properly next time.

As they walked home, Tamaki praised Mirio's optimism while lamenting his own lack of self-esteem. Mirio cheered up Tamaki and said that he will shine brightly like the sun and the reason he can give it his all is due to Tamaki being there for him. Although he was nervous, Mirio praised Tamaki's resolve to never give up which inspired him to do the same.

Despite Tamaki's low opinion of himself, Mirio always thought of Tamaki as a talented person who is cool and super fun and sunny to be around with.[2]

Tamaki noticed that Mirio had always been strong. The two refer to each other by their first name,  indicating his level of closeness and They care for each other when one of them goes through dangerous or emotionally stressful situations.

It's heavily implied that Mirio may have given Tamaki his hero name, "Suneater". It is often seen of Tamaki referring to Mirio as the sun, as in his eyes, Mirio shines bright like the sun because of his bright and positive personality. Mirio, on the other hand, says Tamaki shines even brighter than the sun itself, thus overshadowing it.

When he Mirio he fought against the students of Class 1-A and Tamaki was from the wall defending his abilities and when Nejire wants to explain how her Quirk, Tamaki tells her that it is Mirio's time to speak.[3]

When Fat Gum announces that Tamaki was shot by a bullet that damages Quirks, Mirio showed visible concern and very quickly asked him if he was okay and Tamaki was surprised to see Mirio's state of sadness after learning about Eri's situation and tried to tell her not to be so sad.[4]

When Tamaki had begun to talk about why the heroes would not be able to save Eri or even themselves, Mirio interfered with Tamaki's ramblings with words of encouragement, reassuring Tamaki and encouraging him.[5]

Tamaki worries about what Mirio can do since he knows him perfectly and knows that Mirio can act recklessly. When Tamaki was fighting the three members of Eight Bullets, he remembered Mirio's words of encouragement giving him enough motivation to fight.[6]

When Shin Nemoto shot Mirio during his fight against Overhaul with the Quirk-Destroying Drug, Tamaki woke up from unconsciousness and felt something bad happened to Mirio. It is implied that just after that Tamaki went looking for him and finally pulled Mirio out of the building.[7]

When the subject of Eri's Quirk was brought up, Tamaki put his hand on Mirio's shoulder and mentioned that Mirio's powers would possibly return and said that his future as a great hero may be real. Mirio thanked him for his belief and smiled at his friend.[8]

In Kirishima’s chapter from the vol. 4 light novel (What happens after the events of U.A. School Festival Arc), Fat Gum then asks Tamaki if he’s fought before with Mirio, and Tamaki says they’ve never fought.

When Eri starts crying, saying that her horn started to hurt. Mirio and Tamaki go to find Aizawa, while Nejire stays with Eri.[9]

“And then, you came. You came, and called out to me.”
— Tamaki remembering the first time he saw Mirio, CHAP 140

MiriTama is a couple made up of Tamaki Amajiki and Mirio Togata. These two are childhood friends and have spent most of their lives together, serving as mutual support. They have a strong bond, coming to determine what the other would do in their situation and how they would act.

Despite being secondary characters, the ship has been highly appreciated by fans having many⁚ Fanarts, Fangirls, etc. Miritama is the most written ship for both Mirio and Tamaki and in AO3's My Hero Academia tag.

Mirio and Tamaki in Polaris. 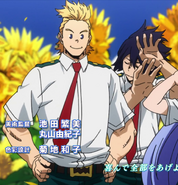 Mirio and Tamaki in Polaris 2.

Tamaki and Mirio in Shout Baby.

Tamaki and Mirio as children in Shout Baby.
Add a photo to this gallery 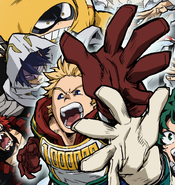 Tamaki behind Mirio in the Season 4 Poster 3.

Tamaki staring at Mirio in the Season 4 Blu-Ray Bonus Art.

Mirio and Tamaki at the Key Visual HERO FES 2019. 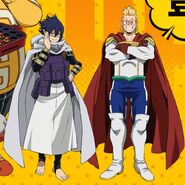 Tamaki and Mirio in the Sketch for Episode 63. 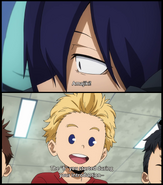 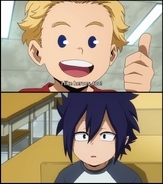 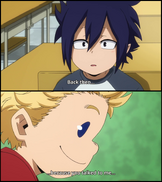 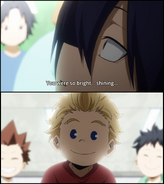 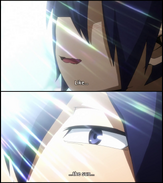 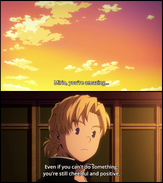 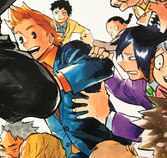 Mirio and Tamaki on the color page of Chapter 146.

Tamaki and Mirio on the color page of Chapter 235. 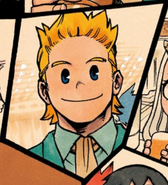 Tamaki behind Mirio on the color page of Chapter 279.

Tamaki and Mirio in the Sketch for Volume 18.

Mirio and Tamaki on the characters page of Volume 17.

Mirio and Tamaki in the Author's Comments for Volume 14.

Tamaki and Mirio in Horikoshi's Assistants in Volume 15.

Illustration of Tamaki trying to get up to go find Mirio in Volume 17.
Add a photo to this gallery

female
Retrieved from "https://shipping.fandom.com/wiki/MiriTama?oldid=259229"
Community content is available under CC-BY-SA unless otherwise noted.