MiruHawks is the het ship between Rumi "Mirko" Usagiyama and Keigo "Hawks" Takami from the My Hero Academia fandom.

Hawks and Mirko are two high ranking heroes with animal-like ability quirks. Similar to how Keigo Takami being the son of a thief and a killer gives him a connection to the world of villainy, the Vigilantes prequel reveals that Rumi Usagiyama has a juvenile record from when she crushed illegal fight clubs while wearing her middle school uniform. Despite this, a child Keigo using his quirk to save innocent people, along a pro hero arresting Keigo's abusive father, and a young Rumi helping Iwao and Kendo to take down a mysteries Hooded Man, while she was still in hero school, lends to them becoming pro heroes. Just as Hawks's main skill and strength comes from his wings, Mirko takes prise in the strength of her legs. Along with the two being proud of the speed that they give them. This is why they prefer to get the job done on their own, while leaving the clean up to others.

In the Pro Hero Arc, both heroes are placed in the top ten ranking of Japan's heroes. With Mirko as number five, while Hawks has moved up from the third to number two. Similar to how Mirko didn't hold back when she states why she works alone and how she'll always be ready to take out any villains who come her where, Hawks steals the spot light when he would no longer hold back his thoughts on the ranking system. Mirko found Hawks's words to be sassy and liked the he chose to use them. Hours later, Hawks get cornered by Dabi and as he prepares to defend an injured Endeavor from the villain, Mirko arrives just in time to save the two pro heroes from Dabi's attack. Mirko had saw the news of Hawks fighting the High-End Nomu and decided to lend him and Endeavor a hand. Her unexpected arrival surprised the tired out Hawks, and as she tries to take on Dabi Hawks stays close to Endeavor. Hinting that he trusts Mirko and has faith in her capabilities. After Dabi got away and medical support arrives, Mirko leaves Hawks' side to find the League of Villains. Earlier on, Hawks was given the tasks to infiltrate the League while keeping his mission a secret from his fellow heroes.

On their separate ends in the Paranormal Liberation War Arc, both Hawks and Mirko did their parts to help their fellow heroes to take on the LoV. While Hawks prepares to take them down from the inside, Mirko joins the Hospital Raid where she encounters many High-End Nomu. During her fight with them she ends up losing an arm and was able to survive her injures with help from Endeavor, just as Hawks got seriously burned by Dabi before being saved by Fumikage Tokoyami. Even though the two ended up being badly hurt in the arc, they were still able to take out their targets before they collapsed. While the two were patched up and are recovering from their separate battle injuries, the public's trust in heroes was damaged by Dabi's broadcast. After Hawks holds a conference to the public with Endeavor and Best Jeanist to repair their trust with confessions and honest truths, a patched up Rumi being seen among some of the recovering heroes hints that she might have heard the top three heroes' words and wants to remain a hero like them. Hawks forms a team to help defeat All For One and Tomura Shigaraki, and because Rumi doesn't do teams it is unknown if she is a member of it or simply lends them a hand when she can.

“Sassy. I like it”
— Mirko commenting Hawks as he begins to speak his mind at the billboard chart announcement[1]

Hawks and Mirko are shipped together from being pro heroes who have animal related quirks (Keigo being a type of bird while Rumi's is of a rabbit). Along with the Pro Hero Arc showing that the two aren't so different from one another, when it comes to their spunky personalities, take pride in their speed and the fact that Mirko came to Hawks' aid when Dabi tried to attack him and Endeavor. Like Hawks, Mirko is one of the popular pro hero characters in the My Hero Academia fandom. After Kohei Horikoshi did a sketch of the two wearing school-like uniforms, it inspired fans to draw Keigo and Rumi in those clothes, along with featuring them as high school friends in their fanfics and artwork of a Highschool AU. Along with Kohei Horikoshi's sketch inspiring fans to ship them.

Most fanart and fanfics on the ship commonly has the two lending each other a hand in group hero missions, or of them simply hanging out together in their casual wear. Along with having Hawks and Mirko swapping quirks and clothes, for a laugh. There have even been fans who have made jokes on the fact that rabbits are one of the animals that hawks pray on. Due to the popularity that surrounds Hot Wings and EndHawks, however, it over shadows MiruHawks. Despite this, it hasn't stopped fans from supporting it, as they hope that the manga will have the two pro heroes cross paths with one another again.

After both Mirko and Hawks got badly hurt in the Paranormal Liberation War Arc, where Mirko losses half an arm and began the theory of Hawks possibly losing his wings for good and how it might end both of their hero careers, fans began to draw and write about the two helping one another to cope with their injuries. The ship's support grew after Vigilantes reveals that Rumi has faced the Hood before he was turned into the High-End Nomu, that Hawks helps Endeavor to fight in the Pro Hero Arc. Along with the fact that Mirko helped Hawks to keep Dabi's from taking the dead Nomu away. Because Mirku has teamed up with Vigilantes as Tiger Bunny, she won't mind assisting a Vigilante Hawks, should the damage that Dabi's broadcast inflected on the people's trust in heroes force them to become Vigilantes; so they can stay heroes.

On AO3, MiruHawks has 81 het fanfics and 310 gen fics. MiruHawks also has reasonable size fanbases on Fanfiction.net, Tumblr and Deviantart. 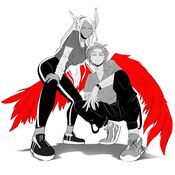 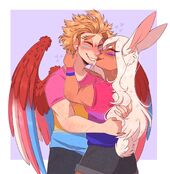