Shipping Wiki
Register
Don't have an account?
Sign In
in: Ships, Ships/Femslash, My Hero Academia/Ships,
and 5 more

MomoJirou is the femslash ship between Momo Yaoyorozu and Kyoka Jiro from the My Hero Academia fandom.

Kyouka and Momo are very close friends with each other. During the Unforeseen Simulation Joint Arc, the two fought villains together with Kaminari, proving to work well as a team. During the End of Term Test Arc, Momo helped Kyouka to study for the class midterms.

When the class split up to go shopping for the training camp, Momo and Kyouka paired up and went off shopping together. Kyouka also has proven to be somewhat defensive of Momo, as she hit Hanta for upsetting the latter with his distasteful comment about her Quirk. The same can be said the other way around; when Kaminari and Kouda were pressuring Kyouka that she should use her musical talents in the Cultural Festival, Momo jumped in to say that it was her decision.

Momo, Kyouka, Mezou, and Tsuyu end up being separated from the rest of the class during the Provisional License Exam arc. They went into a building and Momo and Kyouka are seen next to each other quite a bit. Afterword, Kyouka is shown to be supporting Momo up along with Tsuyu and stay together in the lobby and second half of the exam. They both also placed their targets in the same spots as each other. When the results are handed out, Momo shares her score with Kyouka and blushes as she tells her how amazing it is.

During the Cultural Festival arc, Momo says that she can help the band by playing the keyboard and Kyouka says it'll be a big help. Consequentially, they are both on the band team and are paired up together once again. When thinking up names for their band, Jirou rejects suggestions from all three of their other teammates in favor of immediately agreeing to Momo's idea and saying it was cute.

While having a break from practicing for their concert, Momo compliments Kyouka by saying she seems "to be born to teach," Kyouka blushes saying it's nothing and quickly changes the topic to the tea Momo is making which in turn makes her blush and start to gush about it with her eyes shining.

After their concert, Momo and Kyouka go off on their own and are shown to be having a good time and laughing at a drink in the shape of their teacher, Cementoss. 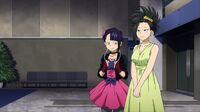 While Momo's interest in girls is limited to arguable interactions with Kyouka and Kendou, Kyouka is shown to be attracted to other girls fairly blatantly. In the first BNHA movie "Two Heroes", when Melissa appears in her formal wear, Kaminari, Mineta and Kyouka are all shown to be floored by her beauty and blushing.

Just before this, both Momo and Kyouka go to where their group is meeting up together and late. Later in the movie, Momo had used up all that her quirk would allow and falls, only to have Kyouka catch her and make sure she is okay.

In canon, the two are shown to be opposites which are often shown off to a greater extent in fanon as the two fit most ship dynamics. They are usually portrayed as soft lovebirds that are also powerful and in general mesh well together.

The great emphasis on sincere friendship between the girls quickly made their ship popular. In this context, Kyouka's admiration for Momo's femininity and charm is treated not only as evidence of her complex because of her tomboy-ish appearance, but also as an indication of her sapphic identity.

However, it's worth noting that as of recent chapters, more evidence has been brought in for Jirou's potential male love interest in the eyes of a lot of people in the fandom: Denki Kaminari, who has been heavily implied to view Kyouka as the most important person in his life. As such, while KamiJirou is often brought up in ship wars with MomoJirou already, it is now to an even greater extent.

Momo, for her side, does not demonstrate the same level of affection, but MomoJirou supporters tend to justify this with her alleged status of Kyouka's crush and thereby the interpretation of their relationship as a character's search for reciprocity on the side of their love interest. Given one of Momo's other ships, TodoMomo, and her open to interpretation affection for Todoroki, such uncertainty makes Momo a key character in ship wars between the supporters of the two ships.

MomoJirou is the most popular BNHA femslash ship in Archive of Our Own, the 7th most tagged pairing under the My Hero Academia fandom, although most of the fics have them in the background instead of the main focus.

Yaoyorozu – “I was... a bit disappointed.”
Jiro – “What? Why?”
Yaoyorozu – “Well... I would have loved to see you singing from the front row, Jiro.”
Jiro – “Huhh?”
Yaoyorozu – “And yet you were still a sight to behold up there in the spotlight, even if I could only view you from behind... (grins) So yes, it was all very worthwhile”
Jiro – “(while blushing) Cut it out, you.”
— Extra moment after the School Festival in the school briefs.