“Mein Fräulein trusts no one more than yourself, my lady, she is simply concerned for your well-being.”
— Oz to Mona about Fischl

Monafischl is the femslash ship between Mona and Fischl from the Genshin Impact fandom.

In Fischl's voiceline about Mona she says, "Aha, yes, Mona, the mighty astrologer... Mona, who once had the vanity to probe the fate of the Prinzessin der Verurteilung herself! She wound up a trembling wreck, overborne and overmastered." Oz then says "*whispering* The poor lass was trying desperately not to laugh. It was no easy task," which means that Mona did look into Fischl's and tried very hard not to laugh but ended up showing her amusement anyways.

In Act 2: Star of Deceitful Dreams: The Crisis Deepens, when Fischl firsts introduces herself, Mona was confused of which nation she was at, into which, Fischl then answered Immernachtreich. Though, Mona was still confused as she tries to pronounce it correctly but fails so. Fischl then called Mona a mere mortal and it made Mona mad about it and she tells that she is a highly accomplished astrologist, thank her very much. She then tells to give her a second with her scryglass then she'll see where her homeland is. Though Oz tells her to refrain from doing it so.

When the Traveler, Paimon, Mona and Fischl were at a open wide place, while Mona was discussing, Fischl then said that it was a curse. Fischl then said that she too, had journeyed the stars, gazed upon the veil of darkness. Mona was confused from what she was saying as she seemed to disagree upon what Fischl said so. When the Traveler and Paimon was winking at Mona, into which the Traveler had the option to say "Fischl is full of, uh... enthusiam." and "Fischl is full of, uh... mysteries.". Into which, Mona understand what the Traveler was saying, Fischl was happy about how Mona understand her.

In Act 3: Star of Destiny: What the Skies Conceal, the Water Reveals. After the Traveler, Paimon and Fischl investigated some of the places, they then went back to Mona. While discussing some stuffs, Scaramouche then came in upon wanting to join their conversation. Though, Mona knew that Scaramouche was one of the Fatui Harbingers so she then teleported her, Fischl, the Traveler and Paimon away from him. Mona then tells them that Scaramouche was one of the Fatui Harbingers. Fischl says that Oz will protect the Traveler, Paimon and Mona. Mona then tells her that she underestimate her, as she is far stronger than she think. Oz tells Mona that Fischl trusts no-one more than Mona, herself, Oz then says that she was concerned for her wellbeing. Mona then tells no need, if anything, she'll need her protection.

In Act 4: Where Ancient Stars Align, Fischl was waiting for the Traveler and Paimon as she is now leaving. While discussing, Mona tells the Traveler that she was seemingly right when she said it was a curse.

Fischl – “Aha, yes, Mona, the mighty astrologer... Mona, who once had the vanity to probe the fate of the Prinzessin der Verurteilung herself! She wound up a trembling wreck, overborne and overmastered.”
Oz – “*whispering* The poor lass was trying desperately not to laugh. It was no easy task.”

Though Monafischl seems to be a small ship, it's still increasing its popularity slowly, due to the Unreconciled Stars Event. Fischl is confirmed to be older than sixteen through her voicelines and story, while Mona does not have a confirmed age. This also how it became a bit controversial, though MiHoYo hasn't confirmed any of the character's ages yet, so it still increased it's popularity. Both, Mona and Fischl can also be good for the electrocharged element in gameplay. On Archive of Our Own, there are over 60 fanfictions between Mona and Fischl. 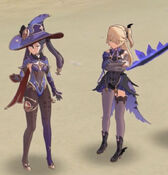