MonoShin is the slash ship between Neito Monoma and Hitoshi Shinso from the My Hero Academia fandom.

Monoma and Shinso are quite similar, as both of them are victims of the hero society and have quirks that society as a whole considers as "unheroic," and instead of aiding them; their quirks been a cause of their troubles.This is why Monoma understands perfectly what Shinso went through,what he feels like and what type of hero he’ll become as we can see during their relating to each other

They meet for the first time in the Joint Training Arc and Monoma immediately takes a liking to Shinso. Throughout the arc, he says things like "I like this one" or "I like you,I really do" (referring to Shinso).During training, they are sorted into the same team, Team 5-B.

They spent a good amount of time of the Joint arc together probably exchanging comments about their classmates performances.This is the case during match 3 when Shinso analyses to Monoma the situation of the match and Monoma replies that he is right.

When it is their team's turn to battle against Team 5-A, Shinso suggests combining his and Monoma's quirks to defeat the opposing team, to which Monoma responds that it worries him to be relied on and that he is counting on Shinso when it comes to take Midoriya down.

Monoma brings up their similarities during the battle, telling Shinso that since their quirks don't have any raw (physical) power, they need to "embrace their darker side," in order to be useful in battle.

When Midoriya's Blackwhip goes berserk, Monoma immediately calls out to Shinso in worry. And when Monoma is caught by Uraraka, Shinso calls out to him while thinking, "I need to save him."

It's shown that the two do care for one another, as they both have apologetic inner monologues, disappointed that they weren't able to help each other out more. Monoma thinks an apology to Shinso about getting himself caught and Shinso apologizes in his mind to Monoma for retreating instead of saving him.

After Monoma gets caught,Shinso starts to remember the discussion he had with Monoma about taking Izuku down and thinks “you went through all that hard work to create an opening.I won’t let this end here”

When apologizing to Shinso after getting caught Monoma used ごめんね (gomen ne) instead of  ごめん (gomen) which is a more affectionate way of saying sorry. You would usually use it to apologize to someone you like a lot or when you feel really guilty about something

In the BNHA Ultra Analysis Character Book, Shinso makes a comment on Monoma's Relationship chart. Monoma says, "I need someone else in order to use my quirk." to which Shinso replies, "I have a similar quirk as you too."

In the My Hero Academia Team Up Mission 12,we learn that Monoma made a room in class B’s dorm in case Shinso joins his class.With the collaboration of class B he made him a soundproofed room to help him concentrate and filled the room with psychological books so he can train.

Before Monoma and Shinso had even canonically interacted in the story, fans began shipping them together for their mutual dislike towards Class 1-A and their "villainous"-style quirks. In time, the ship started gaining more attention following the release of the Joint Training Arc chapters. Their shippers are extremely invested in the ship and don’t hesitate to call them soulmates because of their complementary personalities and looks. Shippers often portray Monoma as the one who has fallen for and begins to pursue Shinso, while Shinso accepts and eventually appreciates Monoma's over-the-top behavior.However some shippers prefer to explore Monoma’s calmer side and consequently portray their pairing in way different manners. Most of MonoShin shippers are a KiriBaku shippers, "MonoShin is just a different taste of KiriBaku" they say. This is one of the "Introverted dark haired x Extroverted light haired" couple tropes in My Hero Academia, such as MiriTama, EraserMic, NejiTama, KamiShin, EraserJoke, KiriBaku (Except for Katsuki's hair is light coloured), etc.

Monoma and Shinso don't have too many appearances in merch or in various games, but when they do, they are often together.They also often indirectly or directly parallel Bakudeku in official content In an interview April 2021, Horikoshi revealed that "Shinso and Monoma may do some pretty big stuff" in the final act of the series. This leads some fans to believe that the pair will team up or work together again in the future. In an interview for the promotion of My Hero Academia Season 5,Hatano (Shinso’s VA) was asked which character he would like to cooperate with if he was in My Hero Academia.He looked at this question from Shinso’s perspective and chose Monoma because of his great ability to strategize and his great intellect which would help Shinso.

Hatano also said he liked the dynamic between Monoma and Shinso as Monoma was more and more excited during the Joint Training arc but Shinso still stayed calm and unconcerned despite this Amasaki (Monoma’s VA) also said that he was happy to see Monoma and Shinsou fight together.He found really significant how Monoma opened up to Shinso about his past and thinks that he talked to him because he felt close to his situation.He then added that it’s a conversation that wouldn’t have happened if they didn’t fight together so he found this really precious

Amasaki also believes that Monoma felt sympathy for Shinso because they share the same kind of quirk that is not easy to deal with. Yamashita (Deku’s VA) thinks that we will see more qualities for both Monoma and Shinso in the future, so the fanbase will love them even more. Amasaki/Hatano and Yamashita/Okamoto (Bakugo’s VA) made an appearance at the All Might Nippon radio event and incarnated their respective characters.There was an "in character" for both duos in which Shinso used his quirk on Monoma.This is interesting as people were usually scared of Shinso’s quirk and he therefore got repeated many times to not use his quirk on them.Yet he does seem to feel comfortable enough with Monoma to actually do it. 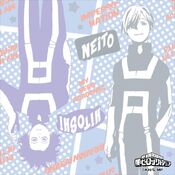 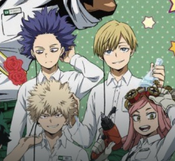 No.1 cover and back cover 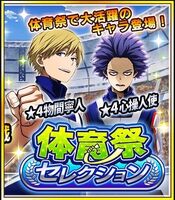 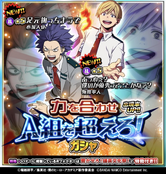 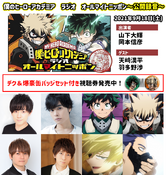 Chibi Monoshin for the cafe event 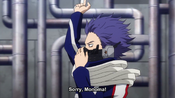 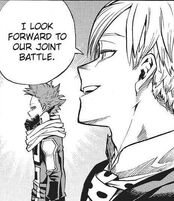 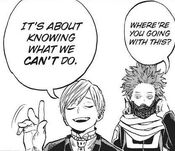 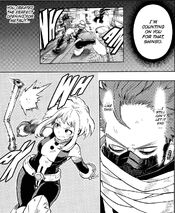 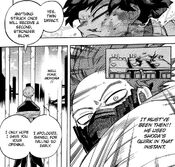