Canon (both as a het and familyship)

Siblings, Dating, Have a child;
Both are destroyed

Monocest is the het and family ship between Monotaro and Monophanie from the Danganronpa fandom.

Monotaro seems to respect his sister more than any of the other Monokuma Kubs and seems the most caring towards her. Monophanie also seems to like Monotaro the most, as he's the responsible type. Nevertheless, they do bully each other and fight occasionally in the typical Monokub fashion, and Monotaro claims he mocks Monophanie whenever she isn't looking.

During Chapter 3, Monotaro and Monophanie are usually seen fighting with each other and verbally talking to each other. However, they tone it down and claim they're just "getting along" in order to avoid Monodam's punishment.

In Chapter 4, Monotaro's memory turned even worse than before and even forgot his own identity as well as who Monophanie and Monokuma was. Monophanie usually beated up Monotaro with a frying pan in order to make Monotaro remember who he was. He then began to act romantic towards Monophanie, saying he had never thought of her that way before. Though Monophanie tried to remind him they are family, she didn't really care and they then began a strong romance. However, the next morning, Monotaro is seen acting completely different, kicking crying Monophanie and demanding her to give him money like an abusive husband, seemingly due to his memory issues. Because of this, Monophanie hides, causing Monotaro to panic since he can't remember anything. However, Monophanie feels bad for him and later takes him back, and he apologizes as the two of them cry. The announcement then ends with "the end", as if it were all theater.

Monophanie also usually complained to Monotaro, due to him being on the side of the students due to his memories. Later, when Miu's corpse was found, Monophanie tried to cheer up his crying "husband". However, the two argue again, as Monotaro is convinced Miu was his mother and wishes to help the students in order to avenge her. Monophanie jealous, runs away crying because Monotaro doesn't love him anymore. Monophanie seems to be jealous of the students because they took away Monotaro from him. In the start of the fourth Trial Monophanie was able to get his memories back and was very happy. Due to Monophanie being pregnant, Monotaro and Monophanie started to act more like a “father figure” for the “baby”. Later, right before Gonta's execution, Monophanie begins to feel pain in her stomach and the two assume that she's having a baby. However, this turns out to be part of the execution, as a giant insect bursts out of Monophanie like in a horror movie and kills both of the Monokubs.

The romantic version of this ship sailed as a result of Monotaro and Monophanie's canon relationship with each other. However, this way, it is one of the least popular ships among the Danganronpa fandom. The primary reason for that is their incest relationship, although in their case they are robots and technically not biological siblings. Nonetheless, they were still both created by the same robot. Their role as Monokuma's children, implying their young age, also didn't help, especially when they had a child together. Another reason for the ship's unpopularity is how toxic the relationship was at some point, with Monotaro being an abusive boyfriend and Monophanie feeling she has to help him, although they soon returned to being kind to each other. Finally, the fact that this incest relationship was introduced in a chapter right after another one didn't help them gain fans either. Thus, majority of fans were happy when the new Monotaro and Monophanie models lacked their memories of being in relationship. Additionally, ships between human Danganronpa characters are way more popular in general.

Although they're not biological siblings due to being robots, Monotaro and Monophanie play the roles of siblings and two out of five of Monokuma's children. Furthermore, they were both created by Motherkuma. As a result, the familyship between the two was created. It is much more popular than the romantic version of this ship because of majority of the fans' feelings towards incest relationships.

In Monotaro's case, his "familyship" with K1-B0 and Miu Iruma, in which he's their "son," is far more popular. 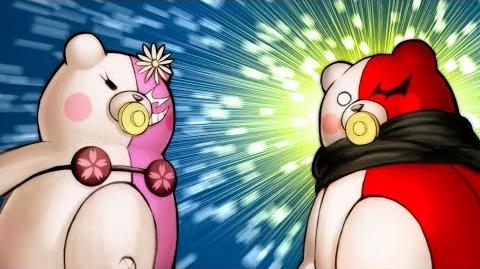 Retrieved from "https://shipping.fandom.com/wiki/Monocest?oldid=183768"
Community content is available under CC-BY-SA unless otherwise noted.