Never met (do not exist within same universe)

“It all started with some fanart. Then it snowballed into a thing, and here we are.”
— MordeTwi DeviantArt group

MordeTwi is the het ship between Mordecai and Twilight Sparkle from the Regular Show and My Little Pony fandoms.

Mordecai and Twilight Sparkle are the main protagonists of their respective TV shows and as a result, have never met each other. In the eighth episode of Regular Show, “The Unicorns Have Got to Go”, Mordecai has several traumatic experiences involving unicorns, resulting in him hating them.

Both are responsible, kind-hearted animals who are well-educated: Mordecai has a college education, while Twilight Sparkle loves knowledge and reading.

The current founder of the group, cartuneslover16, did a crossover story a few years back that had interactions between Mordecai and Twilight Sparkle. People that read the chapters liked the interactions between them, and this pairing grew. She did a few pieces of art for the pair, some depicting scenes from her story, and some for other projects.

Many are skeptical of the ship, as the characters have never met, have very different personalities, are different species, etc. However, fans of the ship argue that there are plenty of weirder pairings than MordeTwi, and there is nothing inherently wrong with the ship. Some think their contrasting personalities would create balance and compliment each other. Mordecai’s incident with unicorns in one episode is sometimes brought up as a point against this ship’s believability, but as those unicorns were “frat-boy” unicorns and not at all how Twilight Sparkle acts, it is not a large obstacle.

In 2020, bluedog444’s MordeTwi fan art became a viral meme. Internet artists began parodying and/or redrawing the image, eventually leading to the creation of the “Redraw MordeTwi Challenge”. The original art was made even more popular by those who had seen only the redraws and wanted to search out the one that started it all; sometimes it was referred to as a legend or treasure.

The meme resurfaced a year later, becoming viral once more. The main social media that used this viral meme was TikTok. A variety of creators made fanart and redraws of bluedog444’s original MordeTwi fanart. Some even making new fanart for the ship. A few creators have even gone as far as creating music videos and animations of the ship. Many claim that this started off as a joke, but now, they think they may actually ship the pair. 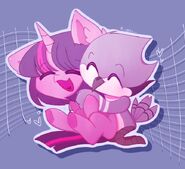 MORDETWI AMV LISTEN TO UR ♥-0

Why Are People Shipping Mordecai and Twilight Sparkle Now?