Both are reincarnated (Post-timeskip)

“Have I met her before? Must've been some time ago. Why...”
— Muichiro to Tanjiro about Nezuko

MuiNezu is the het ship between Nezuko Kamado and Muichiro Tokito from the Demon Slayer fandom.

Muichiro and Nezuko first unofficially met at the Pillar Meeting, when Tanjiro was taken and the pillars were deciding if they should kill Nezuko or not. wherein Muichiro claimed that he did not mind if Nezuko was kept alive in spite of his fellow Pillars' disagreements since he would forget about the situation later on. Muichiro witnesses Sanemi trying to provoke her and her demon instincts, only for her to refuse the bait. Tanjiro aggressively asks Oyakata-sama if he can hit Sanemi for stabbing Nezuko, but Muichiro shuts him by throwing him a rock at a high speed.

When Nezuko and her brother are staying in the Swordsmith Village, Muichiro meets them in the forest. He senses Nezuko's demon blood through the box; perplexed, he wants to reach out his hand, but Tanjiro strikes him. When Muichiro and Nezuko encounter each other face to face, Muichiro seems to remember Nezuko's face and wonders aloud where he had met her before despite not being as attentive as his fellow Pillars when he first encountered her. He thinks Nezuko is strange, but admits it's hard to put his initial impression into words. He tilts his head and crosses his arms at Nezuko, and she imitates him in return.

When the components of Nezuko's blood change and she gains immunity to the sunlight, Muichiro seems to be happy, and after Nezuko hugs her brother, he draws attention to that and asks what happened to her. During the Sunrise Countdown Arc, as Nezuko starts becoming human once again, she begins to undergo drastic changes and gains her memories. She begins to recall all of her friends and allies. She remembers Muichiro fondly, an image of him smiling at her and holding his crow up coming to her mind, insinuating that he was very kind to her during their time together. After remembering him, Nezuko manages to stand up to her feet.

In one of the last chapters, Nezuko and Tanjiro are sadly saying goodbye to their deceased friends, and Muichiro is seen alongside the other Hashira's and the other ones who couldn't survive.

Muichiro and Nezuko have not interacted much within the canon storyline of Demon Slayer, making the ship more of a rarepair. However, fans seem to be taken with a lot of aspects of their relationship, such as Muichiro's relative indifference towards everyone else except for the Kamados as well as their similar ages. Muichiro seems to treat her well compared to many others (save for Tanjiro) in the little that has been seen of the two of them together. Some fans really loved how Muichiro later did accept Nezuko later in the Swordsmith Village, as he smiles when he sees that Nezuko is now immune to the sunlight, or when Nezuko imitated his arms movements and he didn’t seem angry or mad at all. So rather than a romantical ship, they see it more like a friendship.

Fans said they could’ve been really good friends, and many of them like to speculate that Muichiro would be overly caring towards Nezuko while pushing everyone else away, or overly affectionate to the point of annoying his friends , such as this text post by daily muinezu on Twitter. Most of the content for them online is edits of them together (with Nezuko typically replacing Tanjiro, such as this Twitter post), however there is a small fanbase for artwork of them on Pixiv as well. Some others speculate that Muichiro could have been and excellent “third brother” with the Kamado siblings, since Muichiro got to relate with both of them really good, and he cares for botth of them and these siblings also have a deep care and liking for him. 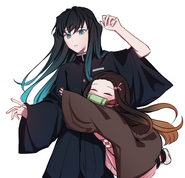