Naegami is the slash ship between Byakuya Togami and Makoto Naegi from the Danganronpa fandom.

The first time they meet each other was during the School Life of Mutual Killing, Byakuya saw Makoto under the impression that he was only an ordinary high schooler unworthy of his time. However, as the story progressed, Byakuya began to admire Makoto's investigative skills, although he would never openly voice it. Byakuya often demanded Makoto accompany him on investigations so he could judge whether Makoto would be a threat to him winning the competition. At times he shows little regard for Makoto's well-being, telling him to go die on more than one occasion and volunteering him to open a door after Aoi Asahina suggests that the door might explode if they try to open it.

In the second game, Makoto, Byakuya, and Kyoko become companions and he supports Makoto's plan to save the remaining students from the will of the Future Foundation's higher-ups. This new bond is reinforced in Ultra Despair Girls where Byakuya remembers kindly Makoto's words and decides to team up with him to pay his debt to Komaru and Toko. The bond is also reinforced in Danganronpa 3 when Byakuya is willing to come and rescue them after they were forced to take part in the Final Killing Game. He also gives Makoto a backhanded compliment when they first make contact. Later, he and his men save Makoto from being gunned down by brainwashed Future Foundation soldiers.

“I don't know... I'm not sure our softhearted Makoto is capable of that kind of cutthroat behavior.”
— Byakuya believing Makoto wouldn't be able to defend himself against Sayaka in the first Class Trial if she hadn't been murdered.

“What's the matter? You're not actually trying to encourage me, are you? Hmph. Ridiculous. It never even crossed my mind that I might give in to despair. But don't misunderstand me. I couldn't care in the slightest what happens to you. I just have to keep my word. I swore I would end the life of the mastermind. Besides, the Togami family *isn't* dead. Because I'm still alive... So until I can restore the Togami family, and bring it greater glory than it's ever known...!”
— Byakuya after being encouraged by Makoto in the finale of Danganronpa 1.

“Hearing you say that reminds me of what you said back at the academy. Hope keeps going, huh... Fine. I'll partner with you. For just a little while.”
— Byakuya teaming up with Makoto in the finale of Ultra Despair Girls after the latter refuses to stand on the sidelines anymore.

“How a commoner like you, with absolutely no unique talents or abilities, could get into this school. Oh, I forgot to mention boring. How a boring, untalented, utterly generic commoner got in...”
— Byakuya about how unremarkable Makoto is during their first Free Time Event.

Byakuya – “Put another way, if all you have nearby is a loser, that's better than a proper assistant far away. Makoto. Be my secretary.”
Makoto – “What...?”
Byakuya – “A useless commoner like you could never hope to earn more than, say, 100,000 dollars a year. But as my secretary, you would be guaranteed an ample salary and job security for the rest of your life. And in honor of it being my birthday today...how about I multiply your already impossible expectations by, oh, 5.5?”
— Byakuya offering Makoto a well-paid job in their fourth Free Time Event.

In some Danganronpa fans' opinion it's possible for Byakuya to have a crush on Makoto, however he would never voice it openly because of his personality (just like it was with his admiration for Makoto's investigative skills), while Makoto's docility towards Byakuya could have meant that was too shy to confess it to him.

Such opinion is further fueled by the fact that by the second Class Trial, Byakuya considers Makoto a worthy opponent he needs to watch out for in case he decides to murder someone. It's even further fueled by their Free Time Events where Byakuya offers Makoto a well-paid job, which is one of the biggest, if not the biggest, Pet the Dog moments from Byakuya. It's the most written for Togami and the second most written for Naegi. It is also the eighth most written ship in Danganronpa. 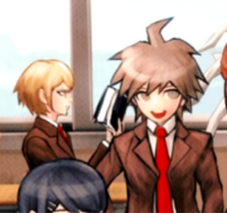 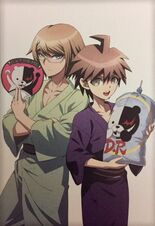 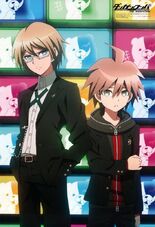 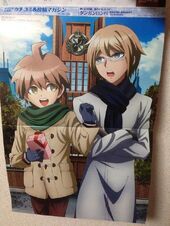 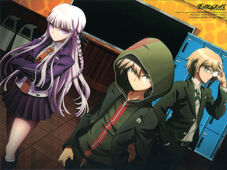 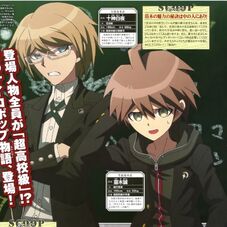 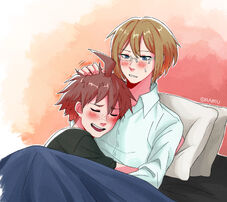 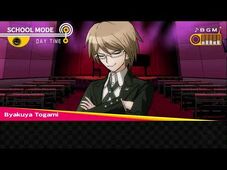