We first meet the trio in Danganronpa: Trigger Happy Havoc where they're among the 16 participants of Killing School Life. With Makoto being the protagonist, Kyoko being his implied love interest (after his first love interest dies), and Byakuya being his rival, the three quickly become the main characters of the game. This is further supported by the fact that they're the most competent characters during investigations and Class Trials. Eventually, they're among the six survivors of the killing game.

They're the only survivors to appear in person in Super Danganronpa 2: Goodbye Despair where they return in the finale to help the remaining participants of the Killing School Trip escape from Neo World Program. They're all revealed to be members of the same division of Future Foundation and to have been working together. After the game's events, they return to Future Foundation's headquarters.

Although Kyoko doesn't appear in person, Byakuya and Makoto appear in Ultra Despair Girls, which takes place before the second game. In the Epilogue, Byakuya agrees to support Makoto, saying that he owes it to Toko and Komaru and that they should work together to one day pick them up from Towa City.

In Future Arc, Makoto and Kyoko end up getting involved in another killing game, which Byakuya, being an outsider to the game this time, attempts to stop with the help of his division.

They also have some events together in New Danganronpa V3's bonus mode, Ultimate Talent Development Plan, although never as a trio. Specifically, Makoto and Kyoko have two events together, while Makoto and Byakuya share one with Aoi Asahina.

This ship is often the result of popularity of Naegiri, Naegami and Togiri, with the fans not being able to choose between the three of them or liking them equally. The fact that the three are among the characters each of them has main interactions with also helped.

Another reason is the trio being the most active and useful students out of Danganronpa 1 cast during investigations and Class Trials. 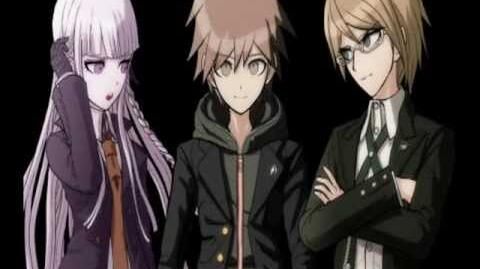 Me, You and Togami
Add a photo to this gallery

Retrieved from "https://shipping.fandom.com/wiki/Naegamigiri?oldid=259728"
Community content is available under CC-BY-SA unless otherwise noted.