• Masculine Girl, Feminine Boy — Kyoko is the more stone-cold of the two, while Makoto is much more light-hearted.
• Second Love — initially, Makoto has feelings for Sayaka, a girl from his old middle school. However, after her death, he begins to grow a strong bond with Kyoko.

Naegiri is the het ship between Kyoko Kirigiri and Makoto Naegi from the Danganronpa fandom.

While their relationship before Monokuma's Killing Game is a bit unclear, in Danganronpa IF, Junko Enoshima described Kyoko as Mukuro Ikusaba's "rival in love," implying that there was some sort of romantic history between her and Makoto before their memories were wiped.

During the Killing Game proper, Kyoko doesn't trust anyone at first due to her amnesia and a suspicion that the mastermind may have a mole hidden among the students. The first major interaction between Kyoko and Makoto happens while they are investigating Sayaka Maizono's murder. Kyoko helps Makoto find several crucial clues about the true nature of the crime, but she insists that he needs to piece them together himself or he'll never be able to accept the truth behind what happened. During the first trial, Kyoko defends Makoto from being falsely accused and helps guide him to his answer. It is revealed that Sayaka was planning to frame Makoto for murder and use the crime to escape Hope's Peak Academy. Makoto is devastated by Sayaka's betrayal, but Kyoko tries to comfort him, using evidence to suggest that Sayaka was hesitant and ultimately tried to protect Makoto with her dying message. From then on, Makoto and Kyoko start growing closer throughout the course of the game.

Over the next few chapters, Kyoko helps Makoto with class trials whenever he's out of evidence, while Makoto helps Kyoko with investigating Hope's Peak's mysteries. However, Kyoko is not above manipulating Makoto if it helps her with the investigation. Makoto trusts her completely, as he hopes that she will trust him as much as he trusts her. Despite this, Kyoko seems to care more about Makoto. Evidence was presented when she entered his room and told Makoto to beware of Mukuro. She also saved him from Junko (believed to be Mukuro), who was about to kill him while he was sleeping.

In chapter 3, Kyoko tells Makoto about the secret room encouraging him to investigate. However, when inspecting the room Makoto gets attacked by the mastermind. As it later turned out, Kyoko suspected that Makoto might get attacked and intentionally lured him to the room to test the mastermind's reaction. Makoto isn't happy about it but doesn't hold a grudge.

In chapter 4, Makoto witnesses the battle between Sakura and Monokuma. However, he refuses to tell Kyoko about it. When Kyoko realizes Makoto is hiding secrets from her, she's irritated by his lack of trust and refuses to speak with him for the next few days. Only when Monokuma reveals Sakura as the traitor and Makoto reveals he suspected it, but didn't want to reveal it to avoid unnecessary conflict, she reconsiders.

In chapter 5 Makoto helps Kyoko disappear from Monokuma's radar by distracting him while she investigates the second floor of the dorms. Kyoko reappears later when the mastermind attempts to kill Makoto, saving his life. Later, Mukuro Ikusaba's body is found. During the trial, Makoto and Kyoko are the main suspects and Kyoko is forced to lie to give herself an alibi. The player can choose to either chose to expose her lie (which leads to Kyoko being executed and a bad ending) or to cover for her which leads to Makoto being found guilty. Monokuma then attempts to execute Makoto (though he's saved at the last minute by Alter Ego) and Kyoko realizes that she's been putting her own desires ahead of his safety. When she discovers that Makoto ends up at the garbage disposal room, she saves him. Kyoko then showed her scarred hands to Makoto, which is a great sign of trust from her, as she states that she shows her hands only to people she considers as close as family.

During the last Class Trial, Makoto was the one who told the remaining students (including her) to not give in to despair, helping her overcome her state of shock over the intense pressure of the situation they were in. Kyoko told Makoto that even though she didn't know her dad, he would never tell her to stay in the school if it meant betraying and getting him murdered by Junko, thus showing their bonds and trust to each other. At their "Graduation," Kyoko told Makoto she was actually kind of looking forward to facing whatever is out there if it's with someone like him (hinting that she might have romantic feelings for him). After joining Future Foundation, she becomes Makoto's leader. Kyoko continues to admire his optimism, and Makoto in turn admires her 'cool' personality and considers her the person who has kept him alive.

In Danganronpa 3, it becomes much more apparent that the two have feelings for each other, most notably in Makoto's more self-conscious demeanor and his tendency to blush more often. After him trying to protect the Remnants of Despair, Kyoko has to escort Makoto to his trial and she promises to use her powers as his leader to protect him. At one point during the Final Killing Game, Makoto catches Kyoko talking about him with Ryota, which seems to embarrass her a bit and makes Makoto blush. Aoi Asahina also seems to know very well that the two love each other, smiling broadly after Kyoko's speech and later looking at them, smiling understandingly, seemingly supporting them. Later, Kyoko ends up triggering her NG code of passing the fourth time limit with Makoto alive. It is implied that Kyoko did not tell him because she believed he might sacrifice himself for her, and it's also possible she didn't know with full confidence that Seiko Kimura's Antagonist drug would be able to save her life completely. Instead, Kyoko gives Makoto words of encouragement before they fall asleep, telling him to never give up on hope and that she would always be by his side.

After he was brainwashed, Makoto hallucinated the "ghosts" of Kyoko and Sayaka, as he believed that she was dead at the moment.

The two reunite after the Killing Game, and it is implied she helps Makoto run the rebuilt Hopes Peak Academy after the events of the Danganronpa 3: The End of Hope's Peak High School/Side: Hope.

The ship sailed as a result of a lot of ship tease between the two over the seasons. Being the heavily teased ship between the protagonist and the main heroine resulted in its huge popularity among the fans. Being the only heavily implied canon relationship not end in a tragedy has also helped its popularity. Its main ship rivals are Naezono and Naekusaba, although this one usually ends up being more popular than the other two, due to the longevity of its characters and their interactions having more development as a result.

Being the ship between the first protagonist and main heroine, it gets a lot of attention from the fans, and as a result, a lot of fan arts and fan fictions. It's the most written ship for both characters on Archive of Our Own. It's also the fourth most written Danganronpa ship, only behind Ishimondo, Komahina and Oumasai. 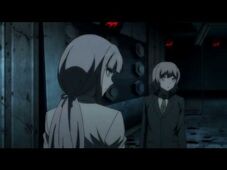 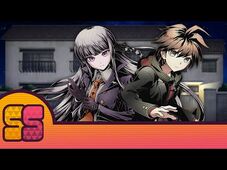 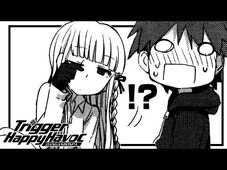 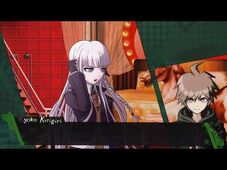