Naegirizono is the poly ship between Makoto Naegi, Kyoko Kirigiri and Sayaka Maizono from the Danganronpa fandom.

Sayaka and Kirigiri were both Makoto's love interests, with Kyoko being the current.

In Chapter 1 of Danganronpa: Trigger Happy Havoc, Makoto and Sayaka met again after a few years, remembering the few times together they got to interact back in middle school. Sayaka assisted Makoto in investigating the school. Makoto supported her and promised her to get her out of the school. However, as is later found out during the case, Sayaka planned to kill Leon and frame the murder on Makoto to get away with it. After the trial is over, Kyoko talks to Makoto about Sayaka and offers a more positive reason as to why Sayaka left her dying message which pointed to her killer - because she still cared for Makoto.

With Sayaka, Makoto's first canon love interest, dead, Makoto eventually develops a crush on Kyoko with whom he works a lot during the investigations and Class Trials. In true ending, he even decides not to reveal her lie in one Trial, believing she has good intentions.

The two are seen again together in Danganronpa 2's finale, alongside Byakuya Togami where they're shown to be working together as Future Foundation members. They appear together again in Future Arc where they end up participating in another killing game, alongside their friend, Aoi Asahina. Right before Kyoko "dies", their mutual feelings for each other are made clear. Kyoko's "death" heavily affects Makoto. After the time skip in the finale, they're seen working together to reopen Hope's Peak Academy.

In Despair Arc, Makoto hangs out with Sayaka, which might hint their attraction to each other. Neither of them interact with Kyoko on-screen, though. Thus, it's unknown whether Kyoko developed feelings for Makoto and vice versa back during their high school days or not.

In Daganronpa 2.5, Makoto seems to like Sayaka rather then Kyoko, probably because his former crush hasn't died in Nagito's illusionary world. He's shown to be much more flirty and she's shown with a much more obvious crush on him. They're later shown walking together, apparently dating, making Mukuro Ikusaba jealous.

The ship has sailed as a result of both Sayaka and Kyoko being Makoto's canonical love interest. With some fans enjoying Naegiri and Naezono equally or not being able to choose between them, the polyship was created. This can also include the Kirizono ship. Some also include Mukuro Ikusaba in the polyship, forming the Naegi Harem. Naegirizono currently has 9+ works on AO3. 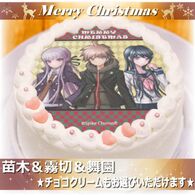