Naehiro is the slash ship between Makoto Naegi and Chihiro Fujisaki from the Danganronpa fandom.

Upon meeting for the first time, Chihiro blushes as he introduces himself to Makoto, and says that they hope they can get along, to which Makoto concurs. Chihiro suddenly gets a surprised look on his face, and asks Makoto if they had met before, but Makoto answers that he doesn't think they have. Chihiro says he's sorry, and Makoto says he doesn't have to apologize for it. Makoto then thinks to himself, stating that Chihiro's appearance is like that of a "timid little bunny." Chihiro suddenly apologizes again, and Makoto asks what it was for this time. Chihiro says that he looked upset, and so he thought that he was mad at them. Makoto says that he wasn't mad at all, and that he was just lost in thought. Chihiro is relieved to hear this, and Makoto remarks in his mind that he is beginning to understand why Chihiro's fans are so into them.

Towards the beginning of the second chapter, the remaining students all convene in the dining hall shortly after the execution of Leon Kuwata. Chihiro expresses liability for Leon's death, and believes that they were all at fault for it, because they voted for him as the Blackened. Makoto tries to console Chihiro, and ensures him that he was not responsible for anyone's death, and that the only one who was truly at fault was the mastermind themselves.

Later on in the same chapter, Makoto sees Chihiro crying, and asks him what's wrong. Chihiro replies that he's just going through some self-loathing, as a result of not having the willpower to stand up against Byakuya Togami the day prior, causing him aversion in his own weakness. Makoto tells him not to stress out so much over getting stronger, but Chihiro insists that he wants to get stronger, and considers working out. After finally managing to crack a smile, Chihiro thanks everyone for helping him, and seeing Chihiro getting some life back gives Makoto a morale boost.

One morning, Makoto awakens to Monokuma in his room, who tells him that something had happened to one of his friends. Makoto quickly rushes into the dining hall to the tell the others, who reveal that they had received the same information as well. The group then begins to search the school for the other students to ensure that they're okay. Makoto's search leads him to the girls' locker room, where he finds the suspended corpse of Chihiro. An almost primeval scream escapes from Makoto's mouth upon realizing what he is seeing. Shortly before the Class Trial, Makoto mourns Chihiro, remembering them for their gentle and calm personality, and how nobody had any problems with them.

During Chihiro's Free Time Events, he is shown to be very polite around Makoto, and appears to enjoy talking with him. Makoto often tries to cheer up Chihiro whenever he is bothered by something, and provides him advice on how to feel better about his insecurities. Makoto also shows interest in Chihiro's talent as a programmer, and often asks him questions related to this. While Chihiro never told Makoto that he was really a boy in the main game, he does so in his ending in School Mode.

During an event in Ultimate Talent Development Plan, Makoto participates in a scavenger hunt, and pulls a card that instructs him to find someone shorter than him. While there aren't many people who fit this description, Makoto knows there is someone like this in his class. Makoto then finds Chihiro, and asks him to come along with him. Chihiro is hesitant because he isn't very fast, but Makoto says it's fine and manages to convince him. Chihiro then thanks Makoto and says he'll do his best, and the two run through the goal together.

“Chihiro Fujisaki is known for all the cutting-edge programs she's created. She's the Ultimate Programmer. She's also got that timid bunny type thing going, which has endeared her to her legion of fans.”
— Makoto calling Chihiro's appearance "bunny-like."

“Oh, that's good. I was afraid maybe you didn't like me. Hehe... I'm glad!”
— Chihiro relieved to hear that Makoto isn't upset with him.

“Chihiro, listen... You're not to blame. Not you, not Leon, and not Sayaka. The mastermind is responsible for everything that's happened. We had no choice but to vote. I can't even imagine what would've happened to us if we'd refused... And in the end, it was Monokuma who ultimately killed Leon...! So don't waste your anger on yourself... Instead, direct it at the mastermind!”
— Makoto trying to comfort Chihiro, following Leon's execution.

“Chihiro... Chihiro Fujisaki... She was so gentle, so calm and meek. Nobody had any problems with her... Someone made the choice to kill...a girl like that... And that murderer...is one of us. Someone standing right here...”
— Makoto mourning Chihiro before the trial.

“Huh? A present...? Yaay! Thank you so much!”
— Chihiro reacting to Makoto giving them a present that they love.

“Wow, I had no idea...! You're so smart, Makoto!”
— Chihiro complementing Makoto after he gives him advice on how to deal with a mosquito bite.

The ship sailed likely because of fans who were intrigued by both characters for how kind, soft-hearted, and down-to-earth they both are. Fans also enjoyed the interactions between the two, both in the main game and during Chihiro's Free Time Events. Another contributor may be the visual similarities between the characters, as they both have brown hair and hazel eyes, green tops, gold buttons, and are relatively short in stature. Some find these similarities give the ship an appealing aesthetic.

While not the most popular ship in the fandom, it still does have a small group of supporters who enjoy it for its wholesome appeal. The ship tends to rank fairly highly among other shipping choices for both characters, especially on Chihiro's side, only losing to Chimondo. On Makoto's side, the ship loses in popularity to Naegami and Naegiri. 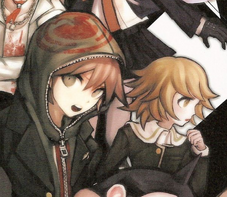 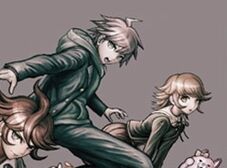 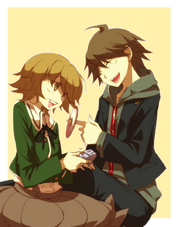 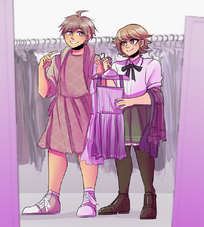 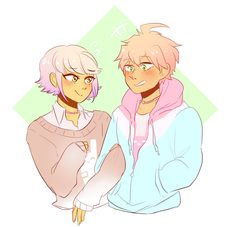