Naejunko is the het ship between Makoto Naegi and Junko Enoshima from the Danganronpa fandom.

As the Ultimate Hope, Makoto was a major enemy of Junko. In turn, she seems to be one of the few people he genuinely dislikes, as he's usually very kind and forgiving. In turn, Junko thinks out of all the students in Class 78th, Makoto seems to be the most annoying and odd person in her class. It is stated that Junko found Makoto's Ultimate Luck especially troubling during the planning of her game, due to the fact it was not a predictable factor.

They developed a great hatred for each other during the mutual killing game. While Junko despised the newly proclaimed 'Ultimate Hope,' Makoto is said not to be able to hate Junko. However, she is the only student for which he holds dislike. In the end, with the help of his friends, Makoto had Junko Enoshima executed. However, even in her case, he felt that she didn't need to die and tried to reason with her when she was about to execute herself. Unfortunately for Makoto, Junko chose to go through with her execution anyways.

Though dead, Junko has later found ways to antagonize Makoto through her AI form, including the corruption of his Neo World Program project to reform her remnants of despair.

Besides his hatred for Junko, in Danganronpa IF, after he convinced Mukuro Ikusaba to think outside of Junko's world, he said that he would try to convince Junko in the same way as her sister, even after it's revealed that she's the mastermind of the Killing game.

While it remains as one of the more popular shipping choices for Junko, it's one of the less common options for Makoto. Its main ship rival is Junkomaeda, which has a similar dynamics of an obsessed with despair Junko and a boy who strongly believes in the power of hope. The latter is often favored over this one because many fans find Nagito Komaeda's unhealthy obsession with hope to be more matching to Junko's unhealthy obsession with despair.

Fan fictions and fan arts usually use the theme of the battle between hope and despair of the two that they have in common with Junkomaeda. Sometimes, Junko would get redeemed by Makoto. More rarely, Makoto would get corrupted by Junko's despair instead. 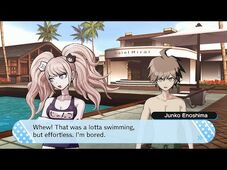